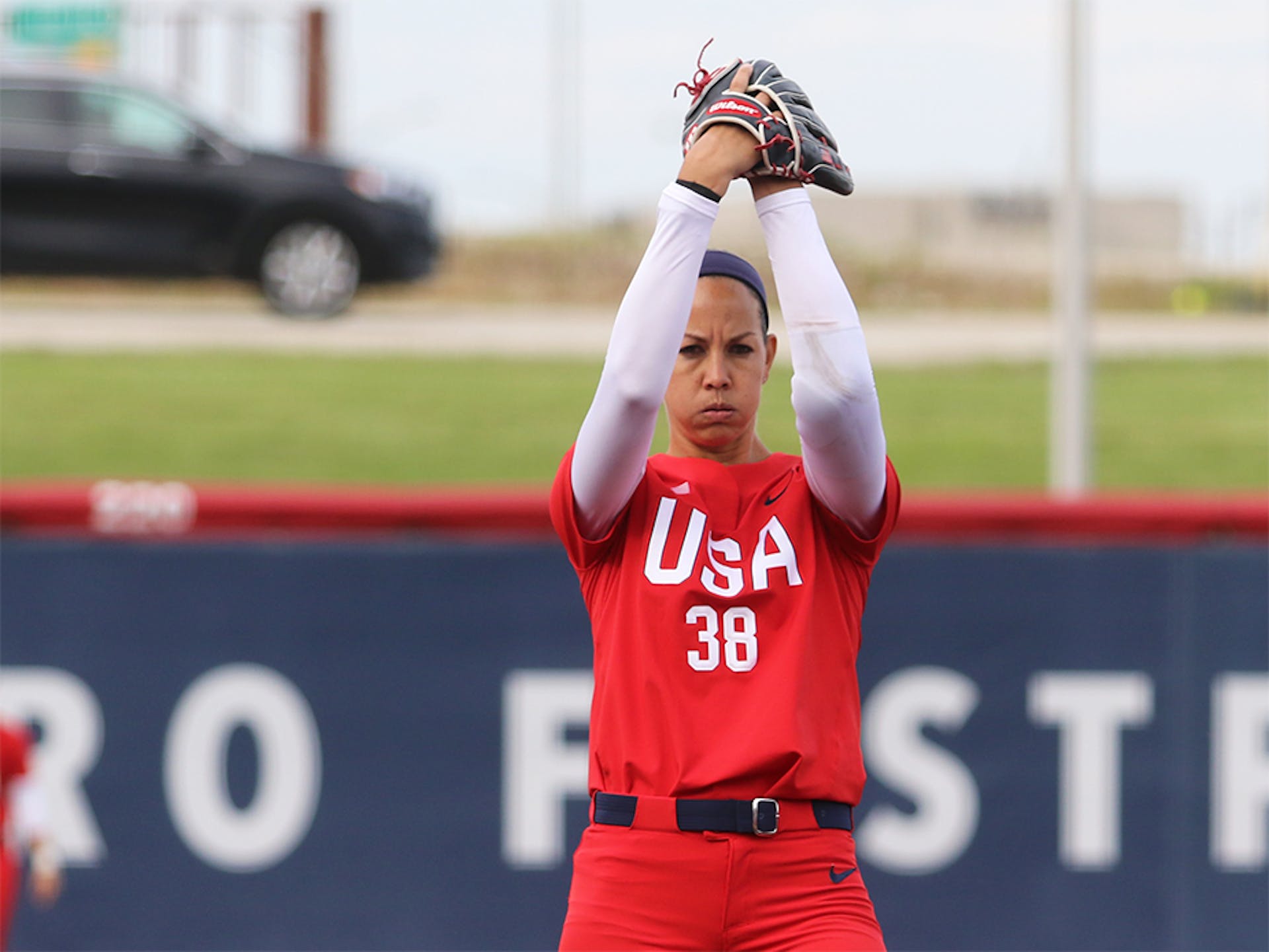 Texas hall of fame pitcher Cat Osterman is well-known for winning multiple titles including two Olympic medals and a startling college stat: she threw an average of more than 14 strikeouts per game – more than two per inning – during her Division 1 career.

But did you know that the left-handed pitcher is ambidextrous on the golf course? Or that the nickname “Cat” came from her junior high volleyball team to distinguish her from three other Catherines? What about the driveway pitching session that ended when one of her rising balls nicked the edge of the garage, ricocheted, and struck her dad in the back of the head and, in a massive panic, caused her to run into the house screaming, “I think I killed dad!”

Or the day three months after her 17th birthday, when she struck out 11 players on the 2000 US Olympic team in five innings (prior to their gold medal victory in Sydney) including imposing slugger Crystl Bustos (twice), catcher Stacey Nuveman (twice), and pitcher Michele Smith (twice). “You would have thought we won the World Series on every strikeout,” Osterman said. “I was shocked.” Or that she will be 38 in Tokyo – both on her jersey and in age?

You did? Well, what about this:

HER BROTHERS HAVE NEVER CAUGHT OR HIT AGAINST HER

The Osterman family has a competitive streak, especially the three children. Yet, remarkably, Cat’s younger brothers Craig, now 33, and Chris, 25, have never tried to catch or hit one of her 62-64 mph missiles. Cat said they never asked.

If they did, they’d have to put on full gear to catch. And if they wanted to hit, she said, “For sure, I’d throw to them,” but don’t expect her to ease up. “No, never!”

Craig remains reluctant. “I’ve never wanted to catch her…and she was always pitching in our driveway so we’re not going to try to hit a ball when we have a house 10 feet to our right and another one 20 feet to our left,” said the former McMurry University swimmer.

Chris was barely in first grade during what he called “the legendary driveway pitching sessions” due to an 11-year age gap. But lately, the former Texas Tech triathlete said he really wanted to “take some hacks.” He played baseball in high school and said he can “still hit dingers in my local slow-pitch league, so I got that goin’ for me.”

Cat begs to differ. “I don’t think either one could [get a hit], to be honest,” she said.

Osterman was not the only superior athlete to grow up in Deerfield Village, Texas. The town in west Houston also claims Tour de France finisher Lawson Craddock (who is currently on the long list to make the 2020 US Olympic road cycling team) and drag racers Courtney and Erica Enders.

“We actually lived behind each other,” she said of the Enders sisters. “They’d remember hearing me pitch on the driveway at night, and I remember seeing their trailer in front of their house, which meant the next day was race day.”

One of the first things Cat’s father noticed about his future wife is that she could palm a basketball. And each of Cat’s parents had a sibling who coached high school basketball. The Osterman family is also strikingly tall: Cat is 6-foot-2, her brothers are 6-foot-7 and 6-foot-4, her dad is 6-foot-5 and mom 5-foot-11. So it’s not surprising that Cat started playing basketball in third grade (even before softball) and finished high school leading the greater Houston area in blocked shots and making the top-20 in rebounds and scoring.

But she was lanky.

“In junior high,” her dad said, “her feet were so big and her arms so long, and she was so little, I wasn’t sure if she was going to be able to get up and down the court. It was kind of that way in softball, too. She had no strength, yet she had these long arms so she had to have almost perfect mechanics to be any good. I could see she had the skills to be a softball pitcher, but I didn’t know if she’d be a good enough athlete. When she finally grew [into her body], everything took off exponentially.”

Osterman made her acting debut in fifth grade, playing Jingle in “Shaping Up Santa.”

According to her mother, “She was the head bossy elf, and she fit into that part really well. That was perfectly her [because] she’d boss around her brothers and… she had a very distinct idea of the right way you should do things.”

And no shortage of opinions. “About four to five days after Craig was born, she told me I could take him back to the hospital now. She was done with him. I said, ‘We can’t do that, honey. We have to keep him. He’s ours.’”

Osterman agreed that her character was “a little bit bossy, but sometimes realistic… I took that role seriously!”

NO CRYING IN SOFTBALL, EXCEPT SOMETIMES

Osterman says that anger sometimes drives her to tears. Her father also remembers her getting “weepy” when she had to tell coaches that she had chosen to play for the University of Texas instead of their schools, which included Washington, Stanford, and Oklahoma.

“She couldn’t get the words out; she was crying the whole time,” he said.

“That was really hard,” Cat admitted. “At the time, you actually developed relationships with coaches you were talking to. Nowadays recruiting – at least for softball – is a lot faster. When I had to call, I got emotional because I’d developed really good relationships and they were good people. I don’t ever want to disappoint anyone. That’s my big thing: not disappointing people. I didn’t want any of those coaches to be disappointed in me.”