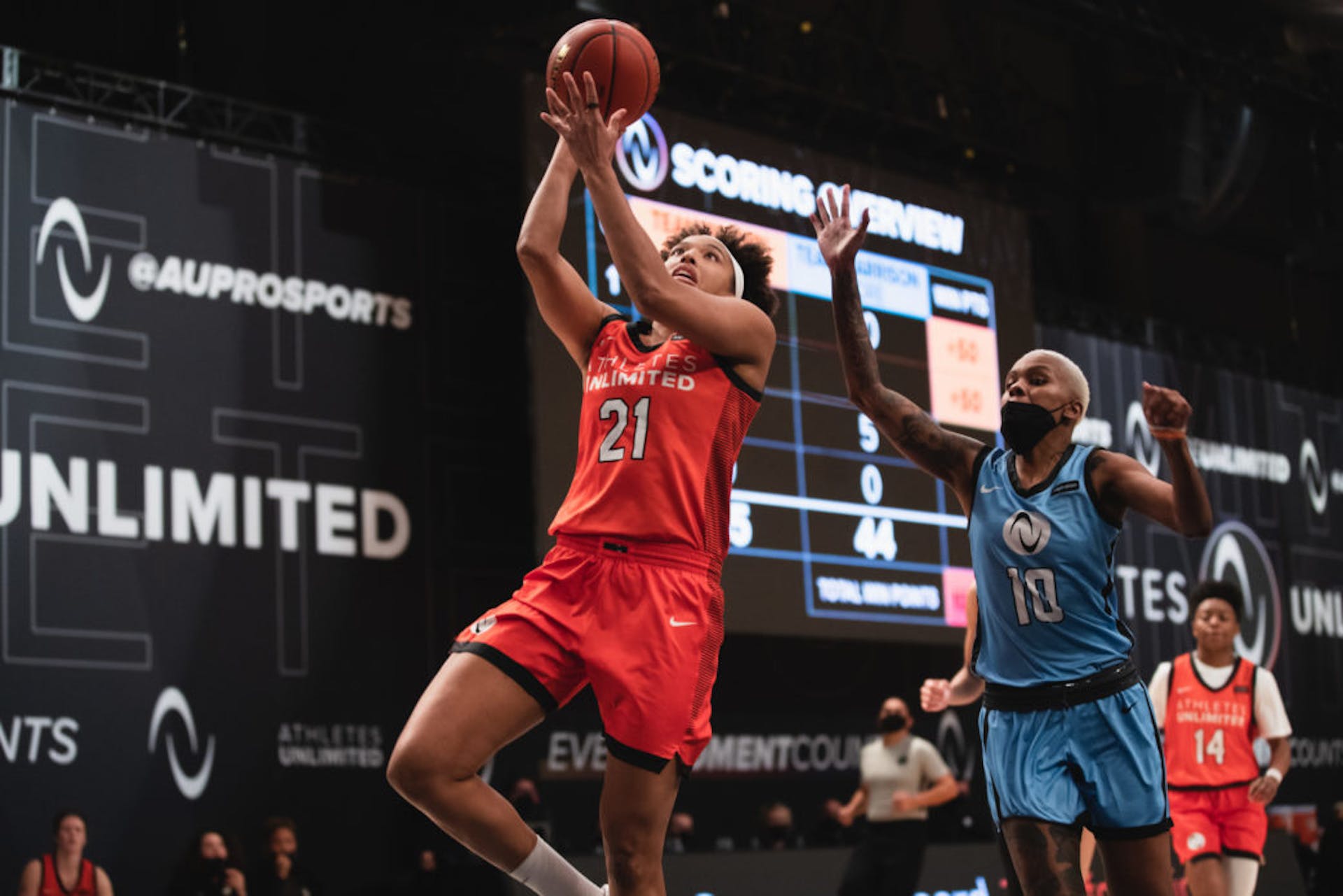 LAS VEGAS — Lexie Brown strategically drafted shooters for Week 2 of the Athletes Unlimited basketball season, and it paid off in Team Brown’s first game of the week.

Tianna Hawkins scored an Athletes Unlimited career-high 21 points and Team Brown became the first team in league history to sweep all of the win points for the leaderboard after beating Team Harrison 83-76 on Wednesday night.

“Our bigs can shoot on the outside, our guards can shoot, so I think that separates from a lot of teams,” said Taj Cole, who chipped in with 7 points and 5 assists.

Brown finished with 18 points, while Essence Carson had 15 points. Carson’s 573 leaderboard points were the second-most of any player this season.

Isabelle Harrison led her squad with 29 points and 12 rebounds, her second double-double of the campaign. Odyssey Sims had 18 points.

“A lot of the mistakes we did was our fault,” Harrison said. “We weren’t active enough and I think at the beginning they really started to just pull away. Offensive-wise, I feel their energy level was way better than ours.”

After getting within three early in the fourth quarter, Team Brown pushed the lead back to eight thanks to a three-point play by Brown and a pair of free throws from Hawkins to seize the momentum and put the game to rest.

Returning from COVID protocol was Imani McGee-Stafford, who was shut down after playing just one game last week. McGee-Stafford chipped in with 7 points and 7 rebounds as Team Brown’s starting center.

“This week I talked to my team about both my conditioning and the way I wanted to be able to move and I felt like I had a better showing today,” said McGee-Stafford, who was playing for just the second time in three years.

The teams combined to hit 14 3-pointers in the game, upping the league season total to 99 triples through seven games. Aspiration will plant 10 trees for every 3-pointer made during the 2022 season as part of its “Trees for Threes” initiative

With Carson’s short jumper at the end of the first, Team Brown was able to win the quarter, 21-20. Though Team Brown outshot Team Harrison in the opening stanza, 50.0% to 42.1%, there were four lead changes, and the score was tied five times. Team Harrison established a defensive presence early on with four steals, while it outscored Team Brown in the paint, 12-6.

The captains took over for their respective teams in the second, as Harrison opened the quarter with back-to-back buckets to give Team Harrison a 24-21 lead. Brown struck back with her patented soft jumper from 3-point range and followed with a basket inside the arc to put her team back in front. Carson also came alive mid-quarter with seven points before Brown closed the quarter by scoring her squad’s final six points. Team Brown lead 43-39 at the half, in what was relatively even 20 minutes of play.

Team Harrison used a quick surge into the third quarter with five quick points, but Team Brown answered with a 6-0 run to take a 49-44 lead. The teams traded baskets throughout the third quarter, but a pair of 3-pointers from Kiki Harrigan kept Team Harrison at arm’s length. After hitting better than 42% in each of the first two quarters, Team Harrison struggled through a cold third, hitting only 8 of 21 (38.1%) from the floor.

“I think we could’ve been better on defense and we know that,” Cole said. “Offensively we wanted to take their bigs out of the paint, bring them up to high-ball screens, set screens away from the ball to make them get out of the paint. I think we were solid. We didn’t play our best game but we still got it done.”

Essence Carson’s performance earned her MVP 1 for 90 points, bringing her total to 573 points on the night. Tianna Hawkins, who tallied 519 points, including 60 points from being named MVP 2 in the effort. Isabelle Harrison earned MVP 3 honors for 30 points, finishing with 253 points overall. Team Brown won the first, second, and fourth quarters while tying Team Harrison in the third quarter to sweep the win points for the night.

The Top 10 Plays from Lacrosse Week 3