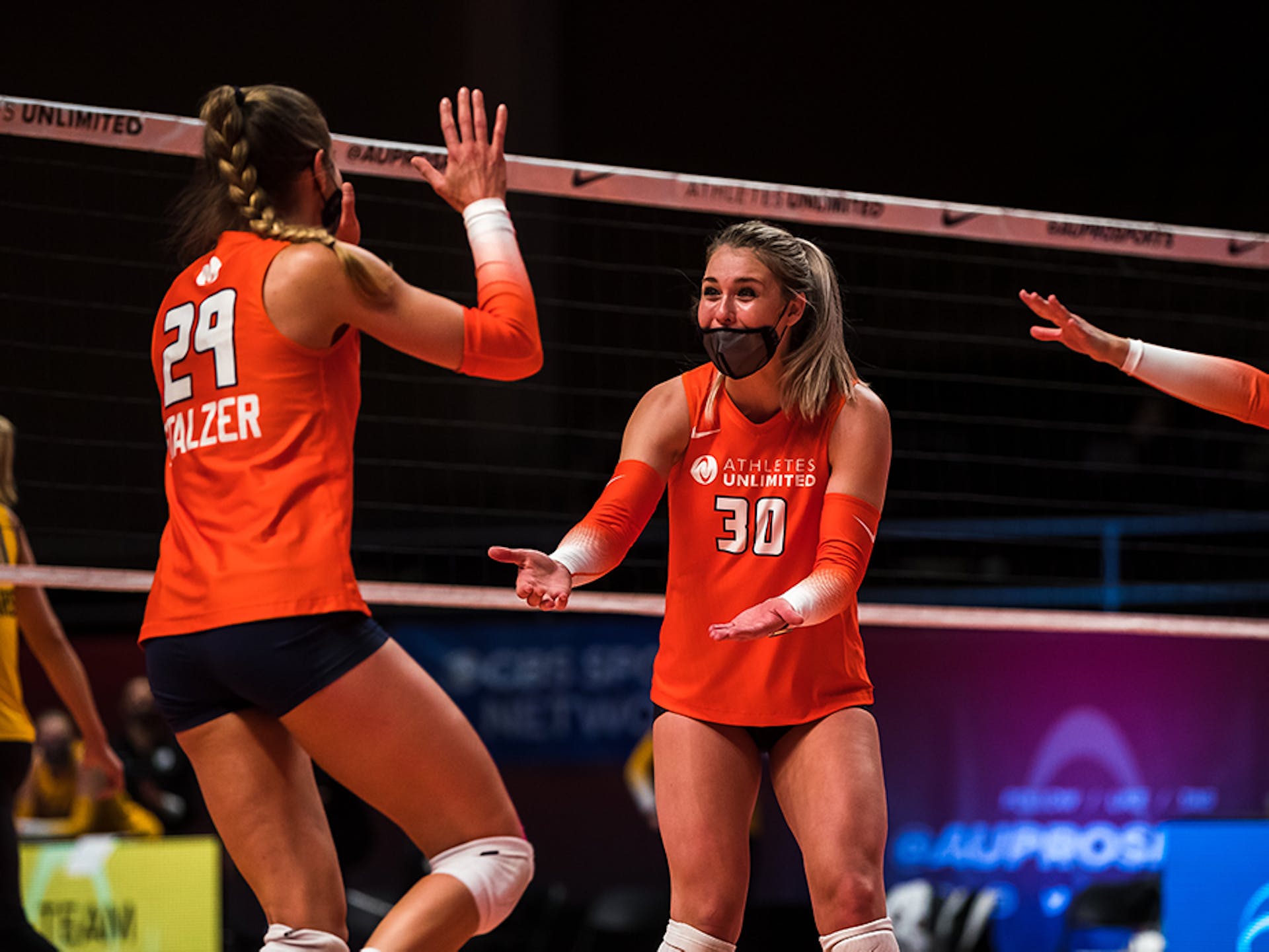 In the final match of Week 3, Team De la Cruz (Orange) faced Team Larson (Gold). The pairing made for an exciting match-up as both teams came into the game undefeated, with Team De la Cruz 6-0 in sets for the weekend.

On top of competing for their final win, the two teams were also battling to determine who’d be the captains for Week 4. Before the match, outside hitter Jordan Larson held the number one spot, beating outside hitter Bethania de la Cruz by only two points.

Set 1 proved to be a battle as each team swapped points. With the large number of effective attackers on the floor, the block and the defense on both sides struggled to prevent kills, resulting in quick points and fast side-outs.

Team Larson finally began to pull ahead late in the set. At 17-13, a long rally ensued with multiple hitters on each side having a chance to attack the ball. Eventually, a hard-driven ball from De la Cruz was dug by Sheilla Castro. Brie King located Larson on the outside pin, who put the ball down on a sharp cross court kill. Team Larson erupted in cheers and King extended their lead to 19-14.

Two consecutive kills from De la Cruz, along with an ace from Erin Fairs, put Team De la Cruz within two, but a perfect serve receive pass from libero Kristen Tupac allowed King to find middle blocker Taylor Morgan on a quick set in the middle to earn the side-out, making it 20-17.

Team Larson extended their lead to 23-18, but Team De la Cruz proved why they’ve gone undefeated in sets on the weekend as they battled their way back to 22-23. Again King found success with her middles for the side-out as Molly McCage obliterated a ball on a quick hit out of serve receive.]

Team Larson extended their lead to 23-18, but Team De la Cruz proved why they’ve gone undefeated in sets on the weekend as they battled their way back to 22-23. Again King found success with her middles for Team Larson for the side-out as Molly McCage obliterated a ball on a quick hit out of serve receive.

A kill from Lianna Sybeldon stalled Team Larson from claiming the set, but a back row kill from Larson on the following play gave her team the win at 25-23 and 40 win points.

In Set 2, the teams remained close in the beginning, but Team De la Cruz was able to pull away after building momentum on a long rally at 11-9. Tupac made an amazing one-handed save off the court to keep the ball alive off a block touch and Larson got the second touch as her run-through led her into her bench’s area. Yet, as Team Larson sent a freeball over, Sybeldon seized the opportunity and got a kill.

After that, Team De la Cruz had the momentum for the rest of the set, surging forward to 24-19.

Although they had a significant lead in the set, one could feel the pressure Team De la Cruz was putting on themselves to finish off the game as McCage got a kill to fend off the set win. In a league where every point matters, and Team De la Cruz had a two-point deficit coming out of the first set, Team De la Cruz knew how much they needed to end the second set quickly.

An ace from Alex Holston against Karsta Lowe kept Team Larson alive for another point, but Lowe responded in kind with a sharp kill that landed inside the 10 foot line, ending the set at 25-19.

In Set 3, Lowe finally found her attacking rhythm and Team Larson proved unable to stop her. Entering the set, Lowe had 23 attempts and only 6 kills, but in the third set alone, she managed to obtain 10 kills. Lowe was voted MVP 1 for 60 points and finished the match with 311 points.

From there the teams traded points evenly until Castro went on a three point serving run, putting Team Larson at 18-21 as McClendon got a block on a Grant slide. However, Lowe stopped the run from going any further with a back row kill.

Another back row kill and a block from Lowe against Larson put Team De la Cruz at set point, and a tip from Sybeldon finished off the set 25-21.

Hunter ended the match with 37 assists and 14 digs, earning MVP 2 honors for 40 points, ending with 319 overall.

For the win, Team De la Cruz received 140 win points while Team Larson received 40 for winning their one set.

When asked what shifted for Team De la Cruz after the first set, libero Nomaris Vélez Agosto responded, “We first started by looking at every player on the team to see what their play was, but in the end we just focused on our side of the court, and what we needed to do together as a team to execute and play a good match.”

Larson finished the match with an incredible 20 kills on 49 attempts for a .290 attack percentage. Larson also made significant defensive contributions with 15 digs and one block. Her performance earned her the MVP 3 vote, granting her an additional 20 points to put her at 225 in total.

With Team De la Cruz only dropping one set throughout the weekend, Lowe and Hunter were able to improve their leaderboard positions to become captains. With the wins, De la Cruz was able to overcome Larson’s lead and claim the No. 1 spot.

For the Week 4 draft, the captains will be De la Cruz (Gold), Larson (Orange), Lowe (Blue) and Hunter (Purple).

Where to Watch: Basketball Week 3