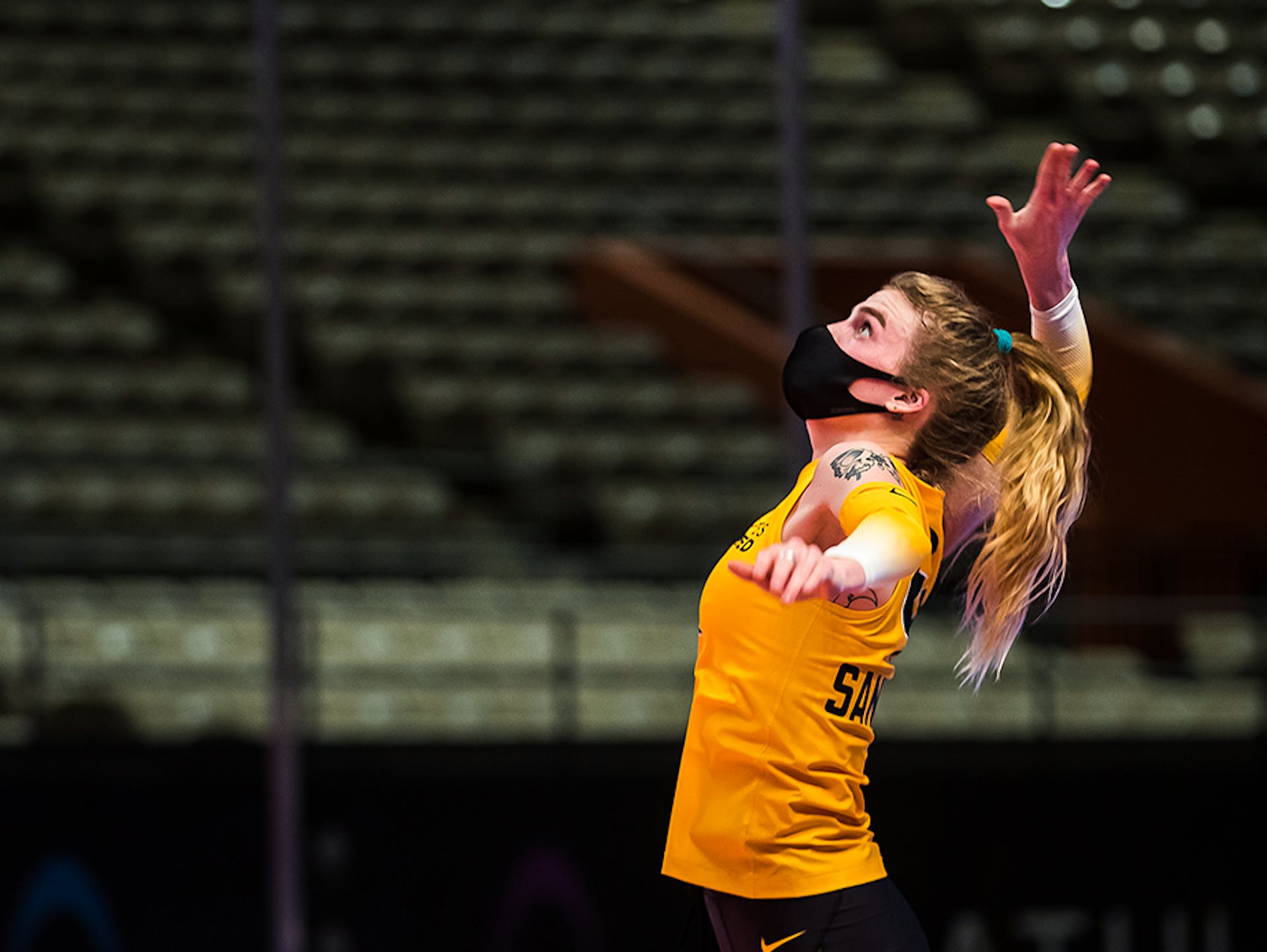 The middle blocker from Kansas City, Mo. was born into a family of athletic figures who had the skill and drive to make it to the highest levels of sport. Her mom resides in the Mizzou Hall of Fame for track-and-field and qualified for the Olympic trials for the heptathlon in the late ‘80s. Her dad is also in the Mizzou Hall of Fame, along with his six siblings, and played professional basketball abroad, including four years in Japan. Her older brother Garrett won a NCAA D2 National Championship for the University of Central Missouri, and her younger sister, Elle, played D1 volleyball for Kansas State and transferred to Ohio State University her senior year.

Although her entire family is close-knit, it’s to her younger sister that Taylor attributes the continuation of her volleyball career.

“My freshman year [of college] I was like, ‘Man, am I just doing this to appease my parents? Is this really what I love to do? Who am I to this game?,’” Taylor remembered questioning. “It took a lot soul-searching and a lot of my sister’s influence to know that I just wanted to give her someone to believe in. Someone [where she’s] like, ‘That’s who I want to be like.’

“When I realized how much of an important role that was for me, everything changed. Everything changed. I remember after my freshman year, I was like, ‘You know, this is something that not everyone can do,’ and I’m so blessed to just even have the opportunity to be on this kind of a stage,” she said.

Although her sister is her main motivator, there was a time when Elle was her main competitor.

In a strange twist of fate, during Taylor’s senior year, OSU faced Kansas State, Elle’s university, in the second round of the NCAA postseason.

Calling the match-up “intense” is a gross understatement; the game took place two hours away from their hometown, had thousands of fans – including a dedicated section for the pair’s large athletic family – and involved five tight sets that ultimately ended with OSU winning the fifth set 17-15.

“I literally could not look at [my sister] while I was out there. I’ve never been nervous. Sometimes I get anxious-excited, but when I’m playing volleyball, I know that if I don’t have confidence in myself, or if i have negative self-talk, I’ll never be able to perform,” Taylor said. “So when I’m playing, you almost have to play with a little bit of a chip on your shoulder, like you’re born to do this. You know what to do, let your body and your mind go free, and trust what your abilities are.”

Despite the postseason defeat, no bad-blood existed between the sisters, and Elle ended up transferring to OSU for her senior season. Taylor refers to the match as “the single greatest volleyball experience of my life.”

OSU lost their next match in five sets to Wisconsin in the third round, but Taylor didn’t even let the dust settle before she was looking to the next step of her volleyball career. The day after she finished playing for OSU, she met with her agent in the lobby of the hotel she was staying at for the All-American banquet.

Taylor’s agent knew of a high-level team in France that’d recently had a middle blocker get injured and was looking to fill the position. Taylor decided to take the contract and was on a plane to France two weeks later.

Over the last three and a half years, Taylor has played two seasons in Peru, and had one shorter season in Thailand. She’d been invited to Thailand to play in the Asian Games, which her team ended up winning.

Even though Taylor has an extreme passion for volleyball, she admits that it can be a “love/hate” relationship at times.

“I hate the sport and I’m obsessed with it. The sport has given me everything. I am who I am because I play it, but I know, this is what I do, it’s not who I am,” Taylor said.

Taylor explained that it took some “soul-searching” for her to reach that mindset in her volleyball career and it’s helped her to compartmentalize her profession from the rest of her life. Without her sister’s influence, she admits that she’d struggle to continue playing.

“She’s part of the reason why I’ve been able to do all of this – with her support and just her overall ‘being.’ She pushed me to be this person that I always knew I wanted to be,” she said. “But I knew it was going to be a long haul and it’s easy to lose yourself in something like this.”

Taylor also pushed herself to play professional volleyball abroad so she could help her sister when the time came.

“The most rewarding thing of this and being a big sister is seeing how your example can really truly affect someone. And just being that person. I always wanted her to know, there’s a path for you [to play volleyball]. Just wanting it is enough, you know. Even if you don’t have all the accolades, even if you never really got seen all the time, I just always wanted to prove to her that if you love it, there’s a way, and I will f—— pave that way for you.”

Taylor did end up paving the way for Elle, who’s currently playing her first professional season in Sweden.

Shortly before the COVID-19 pandemic started in the U.S., Taylor had finished her time abroad and was debating if she wanted to play another season. When the pandemic began, she took it as a possible sign that maybe she should stop playing international volleyball.

Yet, she refused to use the word “retired” when it came to her volleyball career. She knew that she always wanted to have volleyball be in her life in some aspect and was helping coach a men’s high school club team when she first heard about Athletes Unlimited.

“I checked my email every single day for four months, which I really didn’t do that often,” Taylor said.

Her sister had just recently left for Sweden after Thanksgiving when Taylor finally got the news; she’d been accepted to the league.

“When I got the news, I cried and cried and cried uncontrollably. I just had this overcoming  feeling of joy. This had been my dream for my whole life; to play professionally in the U.S. My [family and I] all talked about it, and we all knew it would never happen. And I’d accepted it.”

Yet, now it is happening, and Taylor is bringing her largest volleyball dream to life, thanks to a push from her little sister.