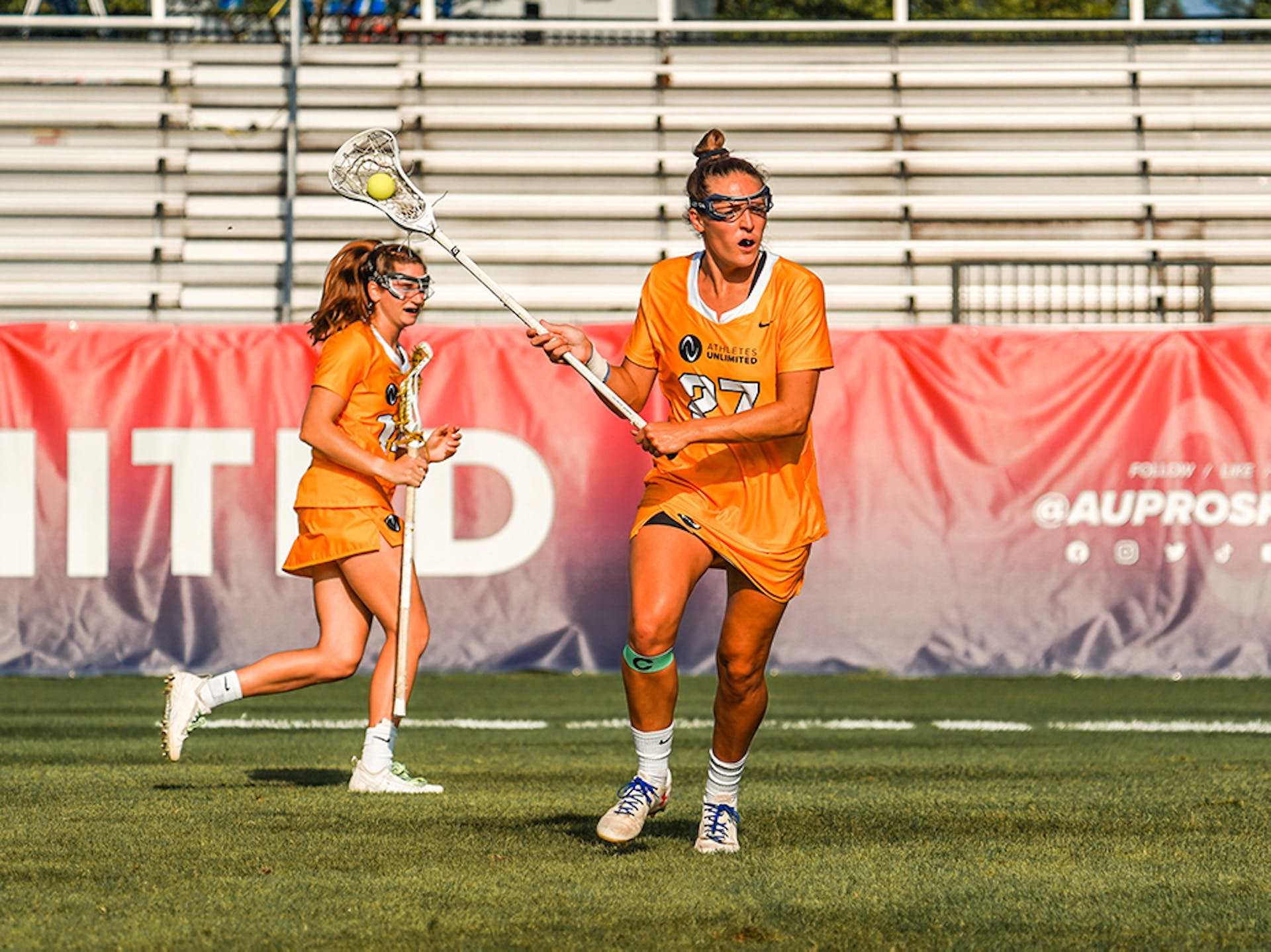 Cummings, a champion at every level of her lacrosse career, adds the title of Athletes Unlimited Champion to her impressive resume after pacing the league with 1,943 points. The former University of Maryland star also ranked second with 548 stat points and was named Game MVP eight times. Cummings tallied 10 multi-goal efforts, and scored a season-high three goals on four different occasions.

One of the top players in NCAA history in draw controls, Cummings extended that success during the inaugural Athletes Unlimited campaign by leading the league with 79, including 10 draw controls three times.

On the leaderboard, Cummings took control of the top spot August 15 and held it through the remainder of the season. She finished the campaign in strong fashion with three games of 200 or more leaderboard points in the final nine appearances, including a season-high 226 points in a victory over Team Ohlmiller on August 20.

As a result, she will receive a gold medal hand crafted by Houston-based Max Lang Belt and Buckles, a father and son business founded in the 1970’s that has made custom buckles for President George W. Bush II, country legends Willie Nelson and Loretta Lynn as well as golfer Jack Nickolaus; a portrait painted by Abigail Rugg, a Baltimore based artist who attended the Maryland Institute College of Art as well as the honor of being entered into the Book of Unlimited, a 500-page book which chronicles the history of the property and will record every Champion from each Athletes Unlimited sport. Players two through four each received silver medals.

Waters, a North Carolina graduate, enjoyed a stellar season in goal and closed out the season just 190 points behind Cummings on the individual leaderboard. She finished second in the league with 92 saves, including a season-high 12 stops on August 20 against Team Glynn. She also added 11 saves the following day against Team Ohlmiller.

Apuzzo saved her best efforts for the end of the season by posting a hat trick in each of her final six games. The league leader with 36 goals in 15 games, she led Team Cummings to a 7-5 victory in the season finale on August 22 with a three-goal performance, including a two-point marker that sealed the victory. The former Boston College standout also paced the league with 91 shots and ranked third in the loop with 47 draw controls.

Glynn fashioned 58 saves in 15 appearances between the pipes, including 27 stops during the fourth quarter. She posted a season-high nine saves against Team Ohlmiller on August 7 and had seven-save performances two times – August 6 against Team Arsenault and August 8 against Team Read.

Block was voted GEICO Defensive Player of the Year in a combined vote of the players and members of the Unlimited Club, and was awarded a medal as well as a $5,000 bonus. Block, a member of the U.S. National Team, was the first defender taken in each of the five weekly drafts during the inaugural season and went as high as No. 6 overall during the Week Two proceedings. The former Syracuse standout finished the season third among defenders on the leaderboard by collecting 1,314 points. She tallied 22 ground balls and 19 draw controls while guiding her teams to a 9-6 record. Block enjoyed her best game of the season on July 24 against Team Douty when she amassed 152 leaderboard points after posting two caused turnovers with two draw controls and a ground ball. She also contributed two assists on August 15 in a victory over Team Arsenault.

“I want to thank everyone who made Athletes Unlimited Lacrosse possible,” said Cummings. “It was an honor to play alongside some of the best players in the world during this incredible five-week season and this gold medal is for all the athletes who helped to take this sport to the next level this year.”

“It is truly an honor to be named the Geico Defensive Player of the Year,” Block said. “The past 5 weeks have been a dream come true and it would not have been possible without our awesome sponsors and everyone at Athletes Unlimited.  A huge shoutout goes to GEICO for recognizing the defensive side of the game that often goes unnoticed.  There are so many athletes deserving of this award and it has been so fun getting to play with and compete against some of the best players in the world.  I cannot wait to see what Season 2 has in store!”

“Congratulations to Taylor Cummings on becoming our inaugural Athletes Unlimited Lacrosse Champion and Becca Block for winning the GEICO Defensive Player of the Year award,” said Jon Patricof, CEO and Co-Founder of Athletes Unlimited. “We applaud each of the lacrosse athletes who played this season and appreciate the fans in the metro DC-area and around the world who came together to support the only women’s professional lacrosse league in the United States.”