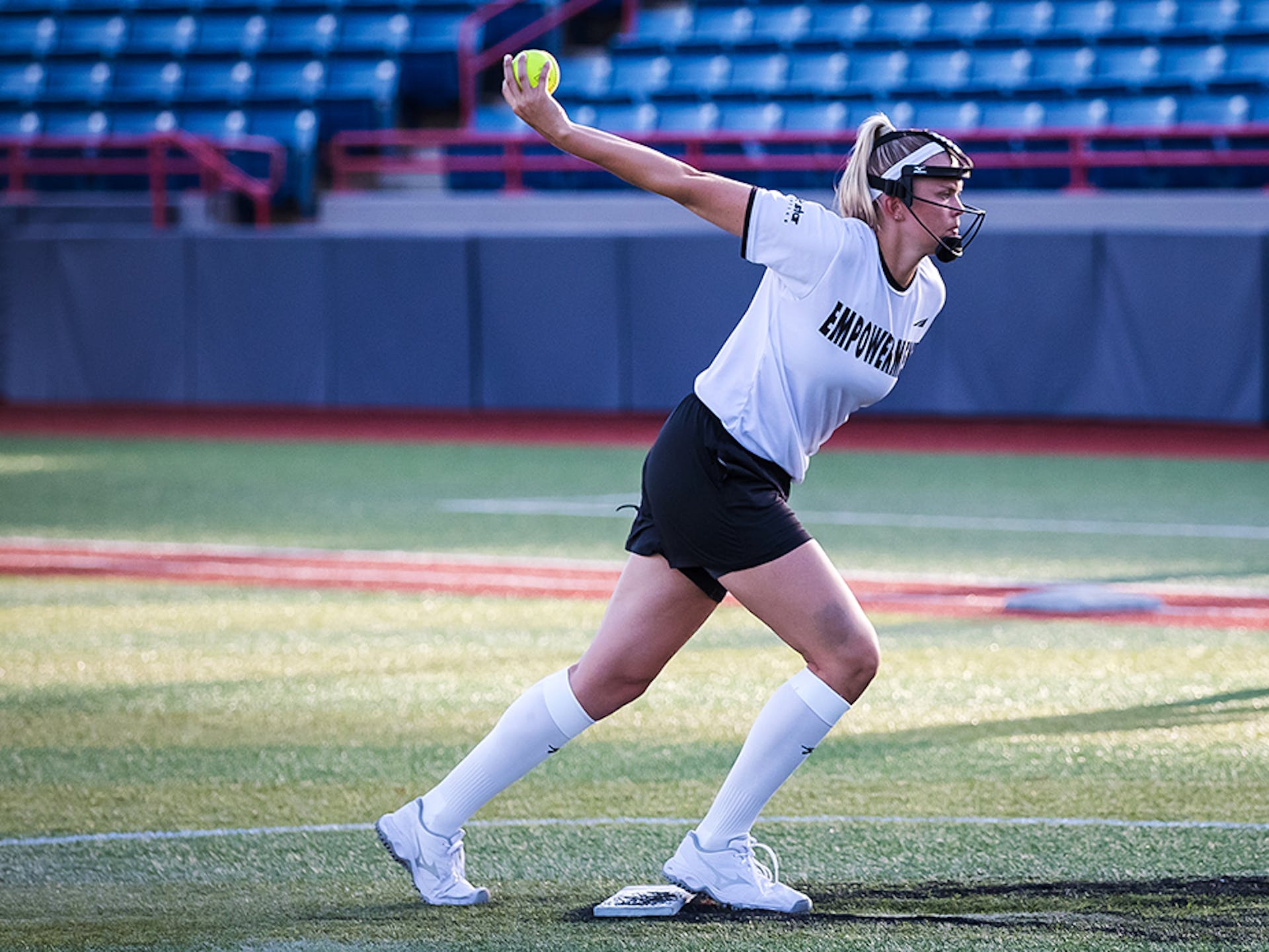 PITCHER-HITTER DUALITY IN SOFTBALL: A TREND THAT CONTINUES?

As younger players are encouraged to specialize, the trend appears to be on the decline

Jennie Finch, one of the greatest softball pitchers of all time, batted .309. Lisa Fernandez, another pitching great, holds the record for the highest softball batting average in Olympic play at .545. Two-time national champion Lauren Haeger is the only college softball player in history to win 70+ games and hit 70+ home runs. Pitching superstars Rachel Garcia and Valerie Arioto both regularly bat above .300. Garcia finished with a career average of .336 at UCLA and Arioto batted .400 at the 2018 USA Softball International Cup.

Notice a trend? Many great softball pitchers also aren’t too shabby at the plate. It’s not true of every pro pitcher, though. Stars like Monica Abbot and Cat Osterman aren’t as well-known for their prowess in the batter’s box. But there are enough talented pitchers out there who hit for themselves that make it a noteworthy trend – and distinguish the sport from baseball. This unique occurrence of dual pitcher-hitters in softball might be on the decline, though.

What is it about softball that produces the likes of Athletes Unlimited pitcher Samantha Show and Canadian Wild pitcher Sara Groenewegen, who are all-star pitchers and big-time sluggers? And if there are fewer dual pitcher-hitters than before, what does it mean for the future of this trend in softball?

As Specializing Increases, the Trend Declines

Although this duality was common in past years, Show and Groenewegen wonder if the trend is dwindling nowadays. Show gives pitching and hitting lessons to young softball players and helps run camps in her area.

“I don’t see as many pitchers that want to hit,” Show said. “Kids are getting so specific in what they do that they don’t get to branch out and try other things. I think when I was growing up, there were more pitchers that hit and hit well.”

Both expressed concern about young pitchers ‘specializing’ too early. Groenewegen spent more time at shortstop than on the mound in her early softball career and encourages pitchers to play another position as well.

“You learn things playing other positions that you don’t learn as a pitcher. You become more athletic,” Groenewegen said.

Neither athlete thinks youngsters should limit themselves to softball, either.

“I do encourage softball players to play other sports. I completely support being a multi-sport athlete, to learn things you don’t necessarily learn in pitching or in softball,” Groenewegen said. Why Do Some Pitchers Hit and Others Don’t?

It’s hard to generalize why some pitchers are hitters and some aren’t. In many cases, it depends on the individual. Some pitchers simply aren’t interested in hitting. Others prefer to focus their time on pitching, or don’t have the time to commit to training both. Sometimes, it comes down to the coach’s approach to pitching and the needs of the team the athlete plays on.

Show pointed out that at younger ages, the Designated Player (DP) and Flexible Player (FLEX) rule in softball is often used to keep the pitcher from batting. The rule allows a team to compete with ten players. Eight play both offense and defense, while two are specialists – one plays just offense (DP) and one just defense (FLEX).

“At younger ages, coaches want to try to get as many people into the game as possible,” Show said. “Coaches think that if a girl’s a pitcher, she’s automatically the FLEX position.”

When young pitchers don’t bat in games, they don’t train their hitting as much and end up becoming a pitcher only (PO) at a young age.

Does Being a Power Hitter Increase a Pitcher’s Value?

With so many POs, the pitchers who can hit well are a valuable addition to a team. When softball players spend time working on their pitching and hitting skills, it shows.

“[Pitchers who can hit] are such a rare breed nowadays that they get more recognition,” Show said. She added that it makes things easier for coaches when making the lineup. It may also get a pitcher more looks if she’s being recruited for college softball.

Show and Groenewegen emphasized that their experiences in the circle and in the batter’s box were mutually beneficial.

What Does the Future Hold for Softball’s Pitcher-Hitter Duality?

Show seems to think softball is heading down the same path as baseball, where pitchers don’t bat for themselves at all. Although the trend continues to an extent, pitchers like herself and Groenewegen are becoming rarer. When it comes to dual pitcher-hitters, both athletes stress growing in the game and learning as much as possible, whether an athlete is just starting the sport or has been coaching for years.

For Groenewegen, being a dual pitcher-hitter is about reaching for the limits of her athleticism.

“I want kids to have as much opportunity to be athletic, and when you specialize in just pitching or just softball, it limits you in what you’re able to learn,” she said.

“There’s always so much more you can learn,” Show echoed. “If athletes and coaches continue to ask questions, the game will continue to grow.”

Our Basketball athletes and their causes