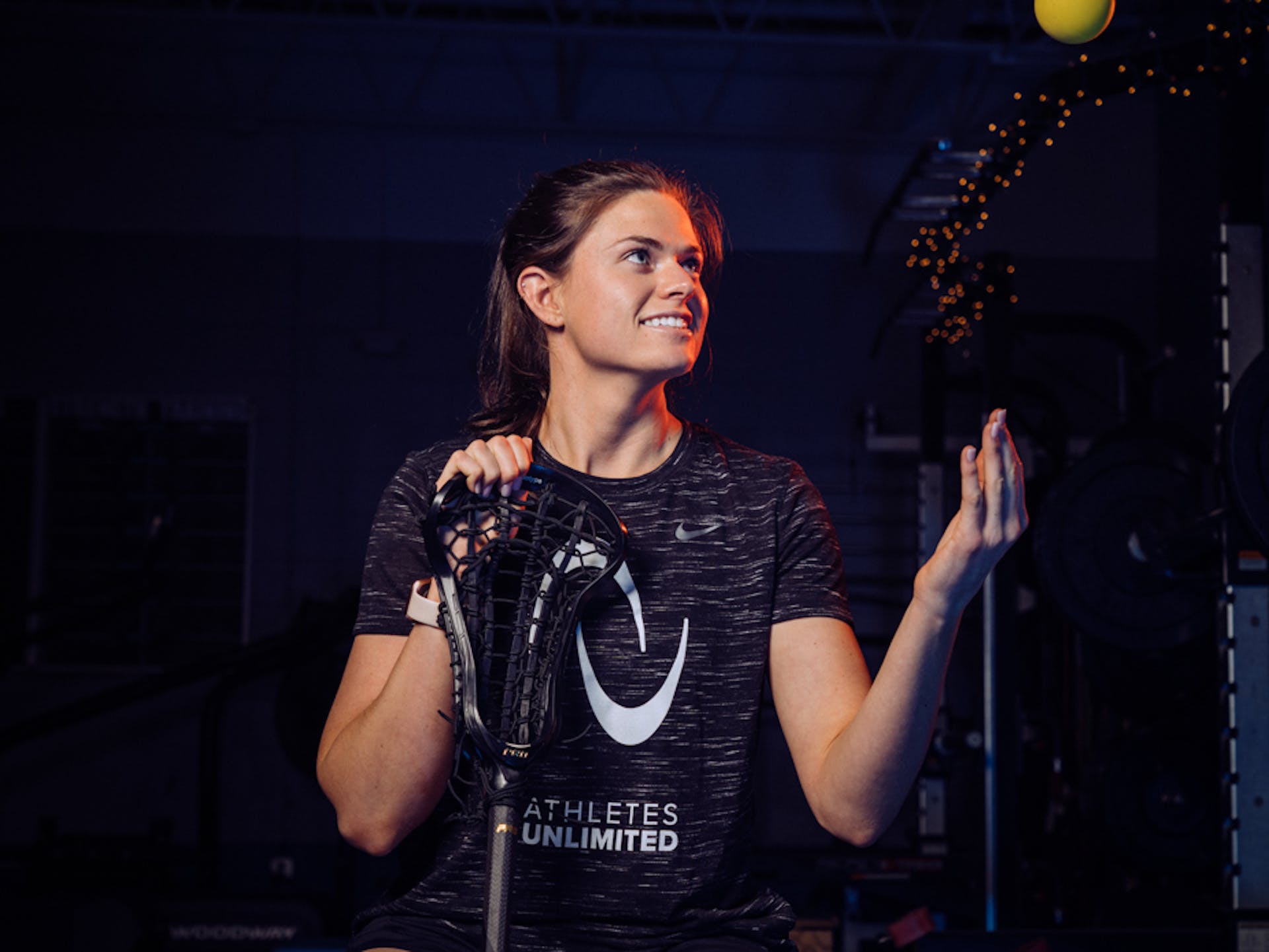 New to lacrosse or just need a refresher? Here’s a list of common lacrosse terms to know before watching Athletes Unlimited Lacrosse this summer!

Another word for the physical goal.

The poles that make up the square frame of the goal.

The pocket references the depth of the stringing. The sweet spot is the upper part of the stringing where the ball is held and should sit in a player’s stick in order to make good passes and place shots.

A line that extends straight out from the sides of the goal line.

The eighteen-foot diameter circle surrounding each team’s goal.The attack is not allowed in their opposing teams crease.

A semi-circular area in front of the goal used for the administration of major fouls. A defender may not remain in this area for more than three seconds unless she is within a stick’s length of her opponent.

A semi-circle in front of the goal used for the administration of minor fouls.

In order to maintain control of the ball when moving along the field, players cradle the ball in the stick pocket by turning their wrists and arms.

In an attempt to dislodge the ball from the pocket, the defending player strikes their stick against the stick of an opposing ball carrier.

Ground Ball// GB – Players compete for the control of loose ground balls by stick checking opponents away from the ball while trying to scoop it up at the same time.

An offensive play in which one player passes the ball to a teammate cutting toward the goal for a “quick stick” shot.

When an offensive player receives a feed pass, they catch it and then shoot it toward the goal in one swift motion.

This is awarded to the player that gains possession at the start of play at each half and after a goal. The two players taking the draw at the center circle are not credited with a statistic unless one of them gains possession for their team.

Defenders clear the ball by running or passing the ball away from their goal area. The best place to clear the ball is along the sidelines, far from the front of the goal.

When a player without the ball moves into a position behind the ball carrier in order to make a safe pass and redirect the ball.

When an attacking team loses possession of the ball, they must quickly switch to playing defense in order to prevent the ball from being cleared back out. In a typical ride situation, the goalie will be left unmarked.

An attacking player darts around a defender toward the goal in order to receive a “pass/feed.” A cutting player is a cutter.

Also known as changing levels, this is when a player maneuvers their stick from low, middle, and high to get off a shot/cradle/pass in order to move the ball more smoothly around a defender.

A player with the ball cradles the stick across their face in an attempt to dodge a defender.

An offensive move in which a ball carrier, using their body to shield the cradled ball from a defensive player, spins around the defender. The ball carrier switches hands as they roll to provide maximum ball protection.

An attacking player without possession of the ball positions themself in front of the goal crease in an effort to block the goalie’s view.

Zone Defense – When defenders play in specific areas of their defensive zone, rather than covering specific defenders in man-to-man.

A defensive setup in which each defending player guards one specific offensive opponent.

When an offensive player with the ball has gotten past their defender, another defender will shift their position to pick up that advancing player.

The ref will raise their flag in the air if a penalty occurs on a scoring play. If the player shoots the flag dies but if the player stops the scoring play by exiting the 8 meter the flag sets them up with a free position.

Green cards are issued for delays of the game and the ball is awarded to the opposing team. Yellow cards are issued on repeated major fouls, checks to the head, unsportsmanlike conduct, ext. and result in a 2-minute penalty. A red card removes a player from the game.

Player Up// Player Down

Describes the team at a player advantage during a penalty situation. Opposite of man down.

Behind the back. Can be a shot or pass.

A pass or shot that is thrown by wrapping the stick 360 degrees around the body from the hand the stick starts in.

A type of shot where the player shoots the ball with their stick at a low angle and the ball finishes high.

A back handed twist shot.

Refers to when a player checks another’s stick and it results in the stick leaving their hands and falling to the ground.

A term used when a shot is perfectly placed to the top pipe or very close to it.

A term used to describe a shot taken right at the top of the crease.