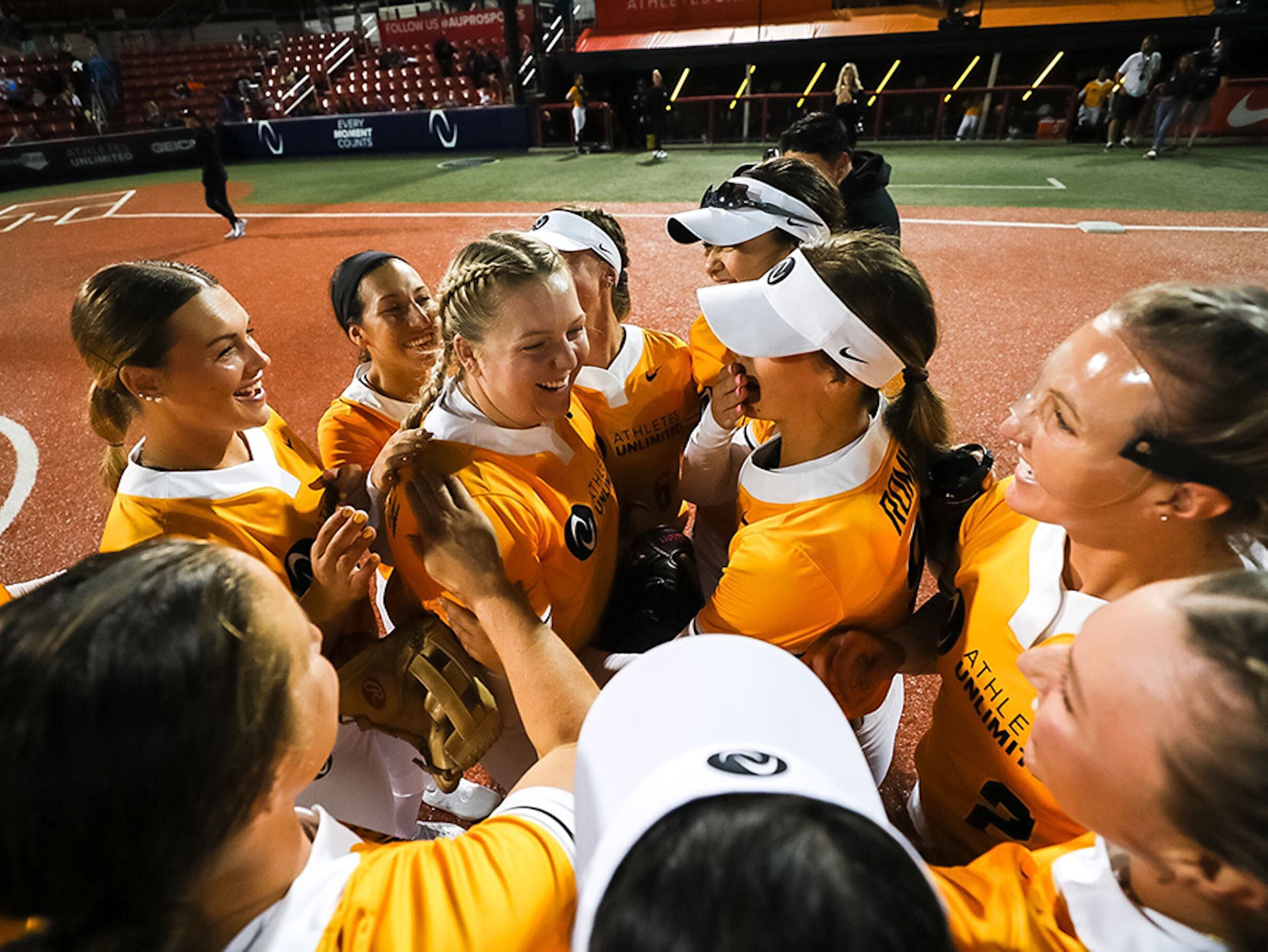 Cat Osterman’s name is always going to come up in any such discussion, and she did not disappoint Monday night.

However, a pair of Osterman’s opponents made their names known loud and clear as they helped Team Jaquish (Gold) defeat Osterman’s Orange squad 2-0 on Monday night at Parkway Bank Sports Complex in Rosemont, Illinois.

Osterman suffered from rare defensive miscues in the bottom of the sixth inning, as two errors helped to the game’s only runs.

All was not lost for Osterman, however. She vaulted to the top of the overall leaderboard after Week 2 of Athletes Unlimited play, with 830 total points. She will captain the Gold team in Week 3. The other three captains will be Hayley McCleney (796 points), Sahvanna Jaquish (790) and Aleshia Ocasio (744). Ocasio is fifth on the leaderboard, and she will sub as a captain for Tori Vidales, who has 782 points but who will be absent for two days next weekend, per Athletes Unlimited Softball policies and procedures.

Osterman’s record fell to 2-1 despite her throwing a complete-game five-hitter. Team Gold got a combined nine-hit shutout from a pair of former Minnesota Golden Gophers, Amber Fiser and Sara Groenewegen.

Fiser started and worked 3.2 innings. Groenewegen came in and picked up her teammate by stranding two runners in the fourth and seeing things through the rest of the way.

“Yeah, it was friggin’ awesome,” said Fiser, the game’s MVP 3, good for 20 bonus points. Groenewegen earned 40 points for being voted MVP 2. “I know it’s going to be a tough game. Cat’s a tough competitor, so I just had to go out there and trust my defense. I think it’s kind of cool bringing back a Minnesota tag team out there. It was a lot of fun.

“Absolutely amazing. That’s what it’s all about. Pitchers pick each other up. We’re each other’s biggest supporters.”

Fiser also noted the symbolism of their team wearing the Gold colors as both she and Groenewegen were Golden Gophers at Minnesota.

Both team’s pitchers were stranding runners all night. Team Osterman left 12 on base, and Team Jaquish left eight.

Until the big sixth inning, the game featured sparkling defense by both teams. Team Gold first baseman Sam Fischer snagged Janie Reed’s grounder amid runner traffic to end the top of the third inning and leave the bases loaded.

About talking on live TV while playing a game, Sartain-Vaughan termed it interesting.

“To be honest, I was a little nervous about it,” she said. “I didn’t want to make an error on live TV and feel awkward.”

For her hit, Sartain-Vaughan was named the game’s MVP 1, earning her 60 extra points. Howe knew her team had to make the most of the opportunity given to it by the errors, especially against a pitcher as good as Osterman and 60 win points on the line.

“Huge,” Morgan said. “I think that goes for as long as we’ve been playing this game, especially when you come up to this level. When that happens, you’ve got to take advantage. Huge. You’re not going to be successful against someone like Cat, especially then. When errors are made, you have to jump on it.”

The game capped off a big day of pitching. In the earlier game, Team Vidales beat Team Piper 4-1. The weekend was an eventful one. Veteran Howe noticed the difference fans in the stands make.

“It’s pretty simple, really,” she said. “Sometimes it’s really, really hard to feel yourself in terms of energy. When you’re changing teams every week, you don’t always mesh. You don’t always get super connected right away. When you have a bunch of fans out here, or just fans of softball in general, sometimes they don’t even care who is on the field. If their favorite player is out there, they’re just happy to be here and happy to watch some great softball. It’s huge. It’s different. I keep saying the word ‘huge.’ But it all is huge.”