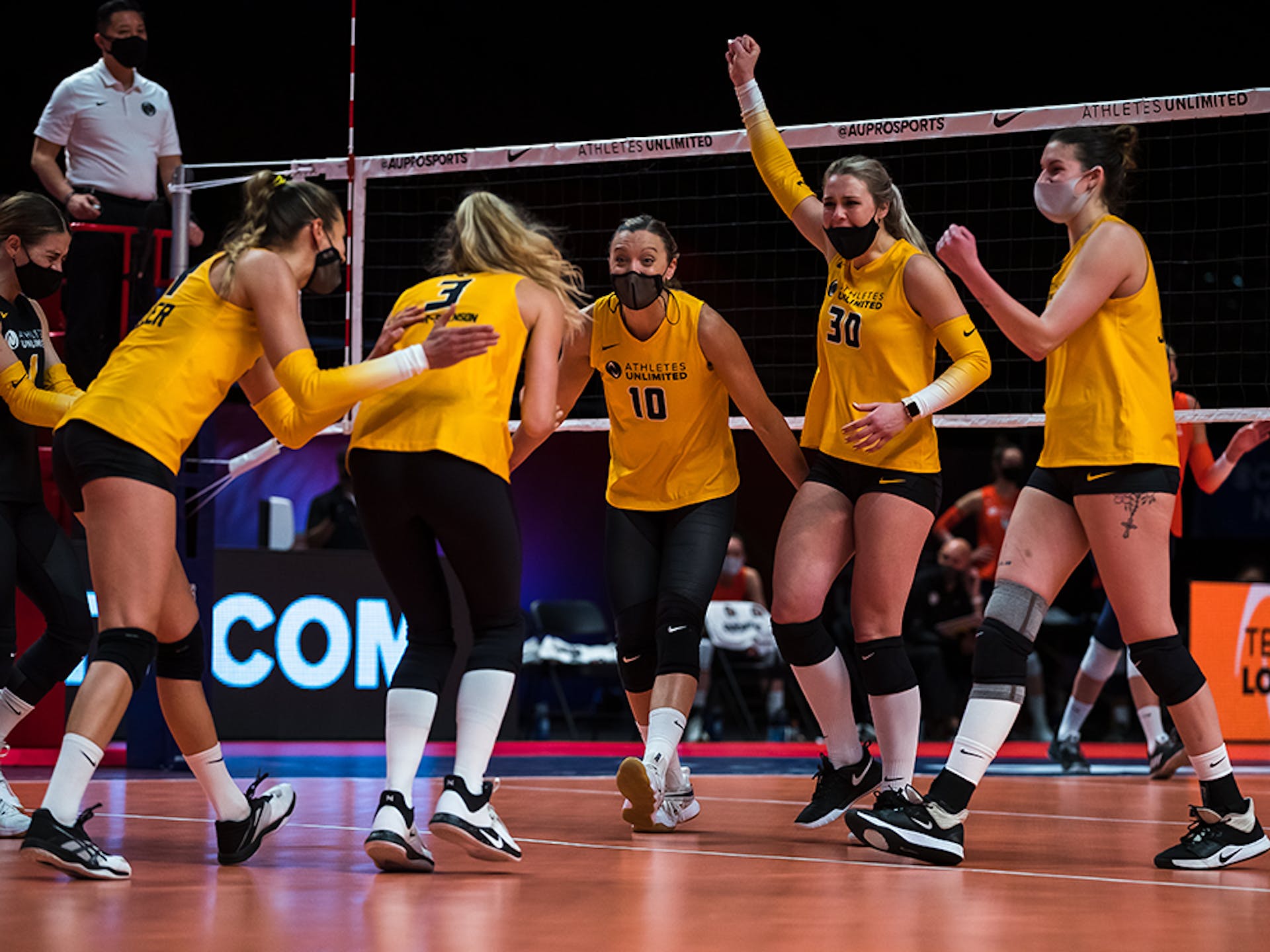 Long-time teammates and Week 2 captains Jordan Larson and Karsta Lowe earned a bronze medal together at the 2016 Rio Olympics. As recently as last week, Larson and Lowe were teammates together on Team Sybeldon.

Yet, on Sunday night, the two found each other on opposite sides of the net as the two attackers went head-to-head.

The match produced all the intensity and suspense one would expect from top competitors who know each other well. Team Larson ultimately took two out of three sets and won the match 71-69, but each point that was earned proved to be a battle.

“We face each other in practice a lot with the national team, so we’re used to competing against each other, but maybe not so much in an official manner,” Larson said. “But it was always fun and we knew it was going to be a great competition tonight.”

For Team Lowe, middle blocker Lauren Gibbemeyer, also a former USA team member with Lowe and Larson, made an enormous defensive impact early in the match through three consecutive blocks in the first 10 points of the first set.

Outside hitter Erin Fairs seemed far more comfortable during the set than she did in last night’s first match and played a crucial role in increasing her team’s kill percentage, putting up five kills.

Lowe, however, was the primary scorer on her team in the first set, getting seven kills on 11 attempts.

For Team Larson, Larson herself and opposite Willow Johnson continued their trend as a dynamic duo from the previous night’s match. Together, the two had 11 kills in the first set.

The first set was close from start to finish. At 22-23, Gibbemeyer got a crucial ace against Larson, tying up the game and causing her team to erupt in celebration on their side of the court.

Despite the ace, and the energy Team Lowe mustered in response, Johnson responded with a back row kill to put Team Larson at set point. An overpass from libero Kristen Tupac allowed middle blocker Cori Crocker to keep Team Lowe alive, but at 24-24 Larson quickly earned a kill from the outside to give her team their second set point.

At 25-24, Larson and middle blocker Lianna Sybeldon were able to finish off the set with a well lined-up block against Lowe, earning everyone on Team Larson 40 win points.

“I think we just need to get more of the small ones, so we can trans and capitalize on those, Lowe said after the first set. “But I think the serve and pass game was good.”

Entering Set 2, Team Larson and Team Lowe traded points to start, but Team Lowe struggled with their defense and miscommunication early on. Three kills from Gibbemeyer and two kills from Lowe before their team had reached 10 points helped to get the team back on track.

Towards the middle of the second set, Team Lowe finally found their rhythm on the small touches and started to build a lead.

At 16-13, a kill from Fairs off the block of middle blocker Taylor Morgan and setter Samantha Seliger-Swenson forced Team Larson into calling a timeout. However, Team Lowe continued their push forward with an ace from setter Taylor Bruns immediately after the timeout. A kill from Lowe on the right pin on the next point allowed Team Lowe to further their lead even more.

Team Lowe was able to maintain their lead and won the set 25-20, earning everyone 40 win points.

Close scores in the first two games set the stage for an intense third set between the two opponents, with Team Lowe leading the match score by only three points at 49-46.

In Set 3, Team Larson jumped to a fast 0-6 lead with Seliger-Swenson serving, forcing Team Lowe to take a timeout in an attempt to reset at 0-5. Although they lost the initial point after the timeout, a kill from Lowe earned her team the first point of the set at 1-6.

At 16-24, Fairs managed to go on a four-point serving run with a block from Cori Crocker and a kill from Symone Abbott.

“I didn’t realize how close it was until I looked over my shoulder and saw the points and was like, ’Uh, we need to side out right now,” Larson said.

As the suspense built and Lowe closed the match lead to a two-point gap, Larson managed to secure the match for her team with a super spike off the hands of Crocker. Although the set itself was still a five-point gap at 20-25, Larson’s team cheered with the intensity of a close game as each team member realized that they won the match and the 60 win points that came with it by a two-point margin. For the match, Team Lowe earned 40 win points while Team Larson obtained 140 with their two set wins and match win.

“It was definitely getting closer than we would have liked, but I’m glad we were able to finish it strong,” Larson said.

The pair of team captains both led their teams in kills with Lowe having 16 and Larson having 15. Larson was voted MVP 1 honors, giving her an additional 60 points to put her at 342 for the match.

Gibbemeyer ended the match with nine kills, three blocks, and an ace, earning her MVP 2 honors and 40 points of her 197 total.

Seliger-Swenson also had an impressive match with 37 assists and evenly distributed her offense with Larson, Sybeldon, and Stalzer hitting above .240, with each having 15 attempts or more. For her crucial role in the offense, Seliger-Swenson was voted MVP and earned 20 points that contributed to her 256 total.