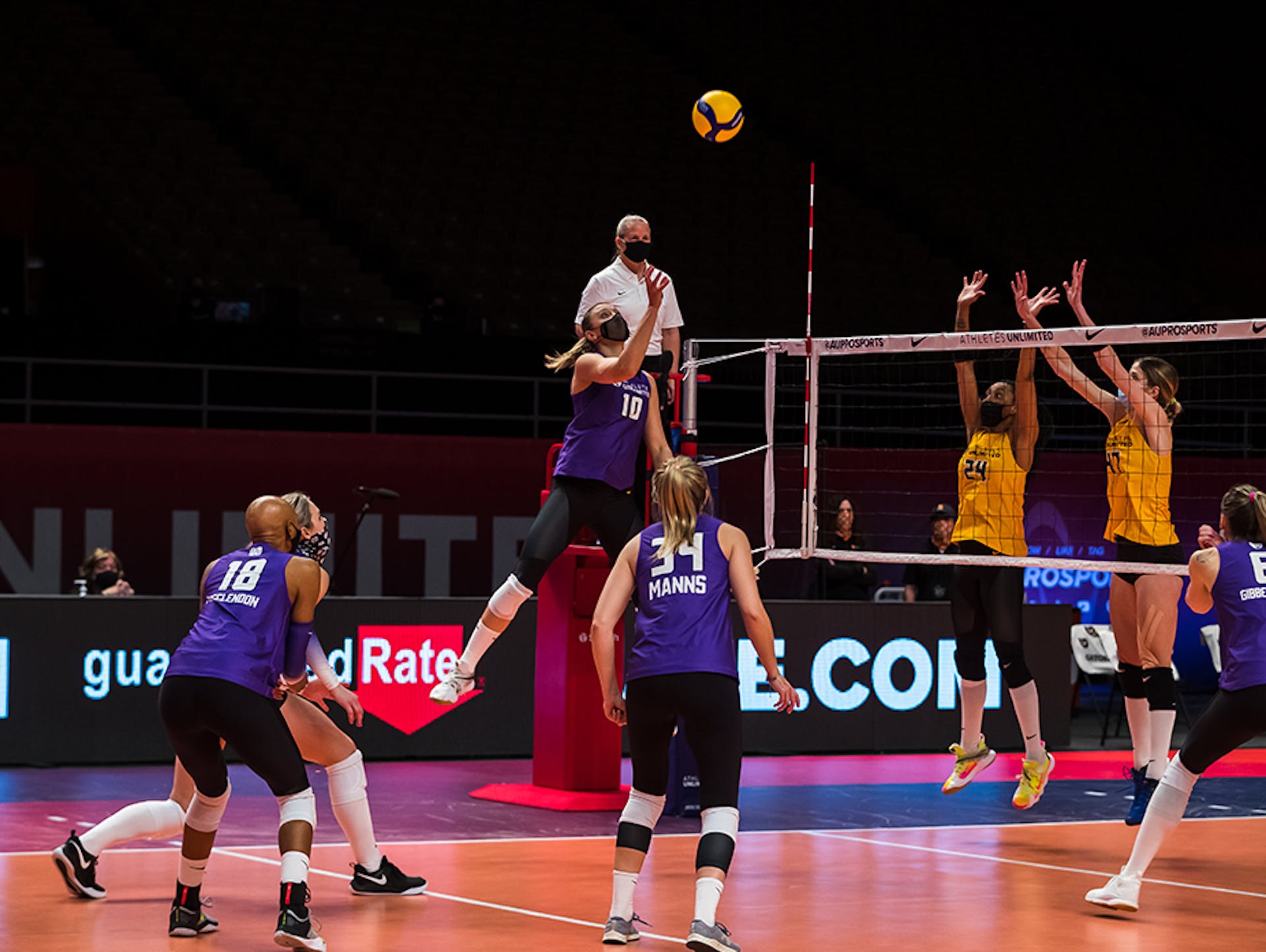 Larson leads team in points for second consecutive night with 333

For the second consecutive night, outside hitter Jordan Larson earned the most points for Team Sybeldon with 333, with 60 points coming from MVP 1 honors.

Team Sybeldon (Purple) dropped the first set to Team Cruz (Gold), but responded by winning the next two sets and the overall match with a cumulative score of 73-65, earning each player 140 win points.

In Set 1, the two teams traded points evenly until outside hitter, and opposing team captain, Aury Cruz obtained back-to-back aces. They maintained their lead for the remainder of the set, although Team Sybeldon was never far behind. A tip over the block from middle blocker Molly McCage ended the set at 23-25, earning Team Cruz 40 win points and McCage eight stat points for the kill.

Having gone 0-3 the day prior, strategy was key for Team Cruz in picking up their first set win of the weekend.

“Our main focus was defense, both in the back row and the front row because we knew coming into today that Purple was going to have a really strong offense,” McCage said.

Entering the second set, Team Sybeldon appeared more at ease and managed to find their rhythm, winning the set 25-17 and earning 40 win points. Hitting percentages from Larson, captain Lianna Sybeldon, and Lauren Gibbemeyer improved. Larson had seven kills while Gibbemeyer had four – both with no errors. Sybeldon had three kills with only one error.

In Set 3, Team Sybeldon was able to build a gap at 15-10 with setter Kaylee Manns going on a five-point serving run. During that run, Sybeldon earned herself 24 stat points with two blocks. Team Cruz worked their way back with several blocks from McCage, narrowing Team Sybeldon’s lead to just one point. Due to their point differential in the second set, Team Sybeldon knew that they had already won the overall match points, but wanted to ensure they could take the final set as well.

Sybeldon called a timeout, so her team could take a moment to regroup.

“We discussed in the timeout that it’s just business as usual. We don’t need to do anything outrageous to win this match, we just need to play volleyball and that’ll take us to 25,” Sybeldon said.

Sybeldon herself managed to get the kill immediately after the timeout to put her team at match point. Gibbemeyer earned the final kill to win the set 25-23, earning her team 40 win points.

For the match, McCage had six blocks and eight kills, earning 130 stat points. MVP 2 honors gave her another 40, for a total of 210 points.

Sybeldon had four blocks for the match and had a .420 attack percentage, obtaining six kills on twelve attempts. The middle earned 20 points for MVP 3 honors for a total of 271.