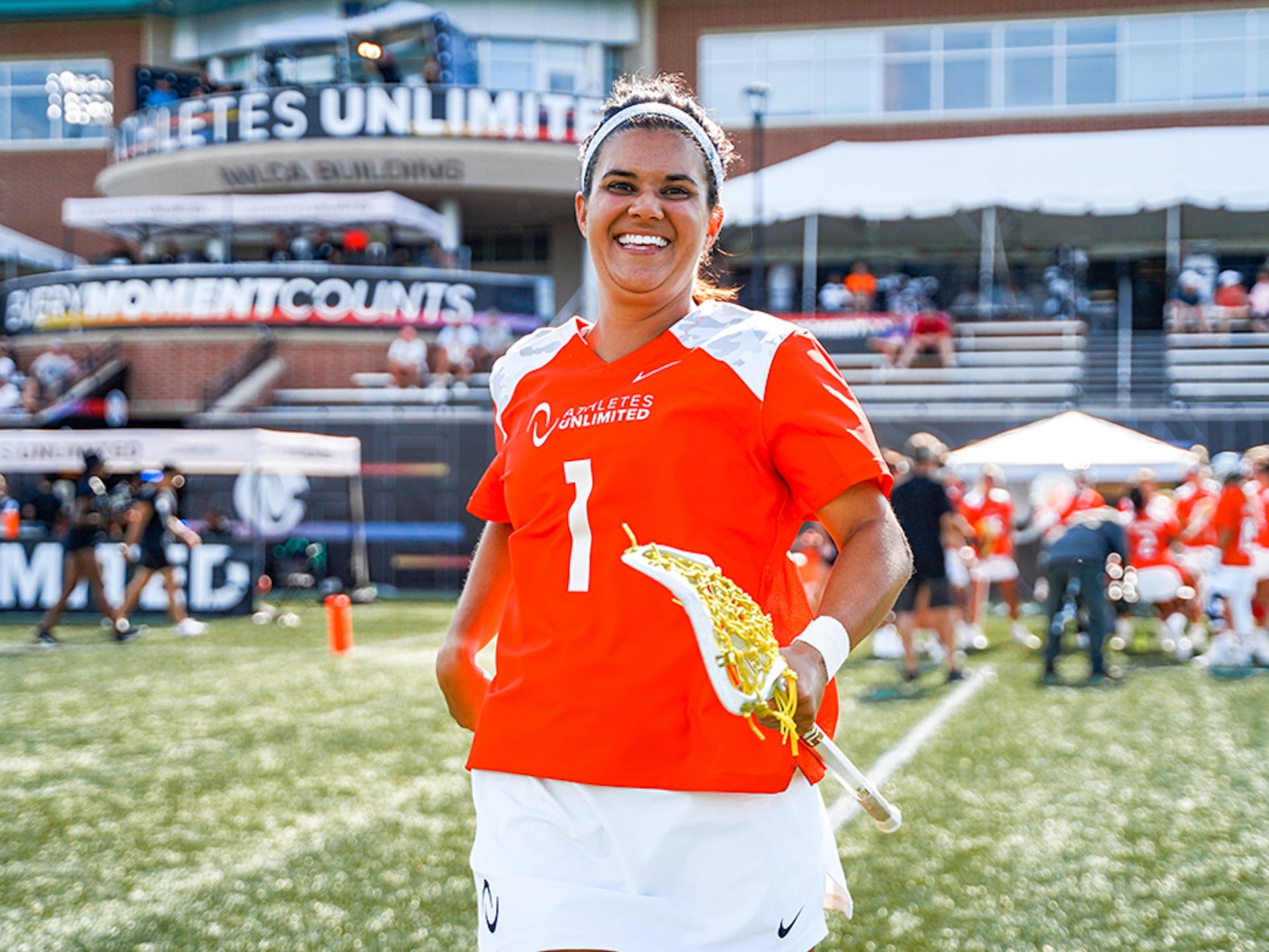 McKenzie: 'I know that lacrosse is better than when it started for me'

Ahead of the final games of her career, McKenzie looks back on the progression of the sport and her career

In short, it’s time for Amber McKenzie to retire, which she will do after this weekend’s final round of Athletes Unlimited lacrosse in Sparks, Maryland.

Best of all, she’s doing it on her time and on her terms.

“I just feel like it’s my time, for a couple different reasons,” she said. “First thing being that I have two little boys, and I want to start focusing my time on them. Logistically, lacrosse makes things a little bit more challenging even though Athletes Unlimited is so supportive of my family.

“But more importantly than that, I just feel at peace with my decision and know that it’s not about me. There are so many players coming up through the ranks who are now graduating college. I’ve stayed in this sport so long and really hope that it pushed the sport to have something like Athletes Unlimited, a professional league, and being a part of that. I want those women who graduate from college to have this experience that I never did when I graduated college.”

McKenzie, 35, was ready to hang up the cleats two years ago, but then along came Athletes Unlimited, and along with it, a chance to play professionally in a league with a new way of playing lacrosse on the field and a way of empowering women off the field.

So this decorated defender from the University of North Carolina decided to give it a go for what turned out to be two final seasons.

The experience has been fulfilling for McKenzie.

“Yes, oh my gosh, Athletes Unlimited has been so fulfilling,” she said. “We all joke that it’s like adult summer camp, but there’s nothing better than that, especially if you’re a competitor, being  amongst 56 other women who are equally competitive, have the same drive as you and being able to play the sport you love with them for four or five weeks straight,  just competing, the camaraderie. There’s literally nothing like it. It was so fulfilling. I’m walking away from this sport so fulfilled and so at peace with  my decision.”

For McKenzie and all of the mothers in AU’s sports, the organization provided her with things she had not experienced before in her career. On top of that, her sons (Storm and Bolt) have made fast friends with the players and can be found playing video games with the likes of rookie standout Charlotte North.

“For me personally, just the support of having a family and the way that they support women with children, they give us a stipend for childcare,” she said. “I’m fortunate my mom works in the school system and has the summers off. It allows me to have my mom as, quote-unquote, nanny for my boys. They’re just so supportive, and my kids have been here for the past three weeks. They’ve been here, and they’ve been living with me, and they get to experience this league along with me, which is really cool, especially for my oldest because I feel he’s going to remember this experience and he feels very connected to the players.

“And also, I just feel like you’re never alone here. I feel there is constant support of your well-being, not just as an athlete but you as a person. So I never felt like my kids weren’t included. For me, that’s huge. I want my kids to be part of the process, and Athletes Unlimited has made me feel like that’s possible.” McKenzie also stepped right into a leadership role and is Co-Chairperson of Athletes Unlimited’s Lacrosse Player Executive Committee. The PEC empowers the athletes by allowing them to have a large say in matters on and off the field.

“It’s empowering for a lot of different reasons,” she said. “One, it’s empowering to be able to say we’re professional athletes. We’ve had other leagues. And I’m so grateful for all of the people who have really tried to make us have a professional league and be worthwhile. But this is the first one that you can actually say you’re professional. What they provide for us backs that up. And just empowering in the sense that you’re around so many like-minded women. I feel like it’s a social experiment.

“There’s never a time where you’re around so many other people that are motivated, who are competitive, who have the same drive that you have. And we’re all here together. So I think  that’s super unique to Athletes Unlimited in the way it’s structured, and it’s something that I really love.”

On the field, McKenzie said she enjoys the fast pace of play, the physicality of the sport and the AU points system, which rewards both team and individual play.

“I love the way the game is played,” she said. “As a defender, I feel we can get away with a lot more than in the college game. So that’s nice. In college, the things we can do here, we would get called for. It’s so natural to do those things. For attackers, it’s not natural for them to have maybe that much contact. So I feel like, as a defender, it’s maybe a little easier transition because you can do a little bit more.

“The points system is great. How fun that the leaderboard is constantly changing and that you can move up, you can move down on how your team plays. Truth be told, we’ve said it really does matter how  your team is performing. If you are winning, you’re in the top of the leaderboard. If you’re not winning, unfortunately you’re at the bottom. It really is a true reflection of a team-first mentality. Obviously, people with MVP points can move up themselves, but the majority of the leaderboard is just team first.”

There will be plenty for McKenzie to do in retirement. In addition to being a mom, she can support the career of her husband, Norval McKenzie, who is running backs coach and run-game coordinator at his alma mater, Vanderbilt University. She is co-director for Sound Lacrosse in Newton, Connecticut, and she helps coach a high school team in Nashville.

This weekend, she’ll pause to take it all in over her final weekend as a professional player.

“One hundred percent,” she said. “There are times in your life you never forget, like winning the Gold (for Team USA) in Prague in 2009. I had just graduated college. The moment was so surreal for me. I feel like I might have a similar moment this weekend and knowing that this is it. I feel very content in that decision. I know that lacrosse is better than when it started for me. There were so many women before me that made it better for me. And now we’re leaving it better for the next generation. It’s not about me. It’s about how far this sport is coming and continues to grow.”