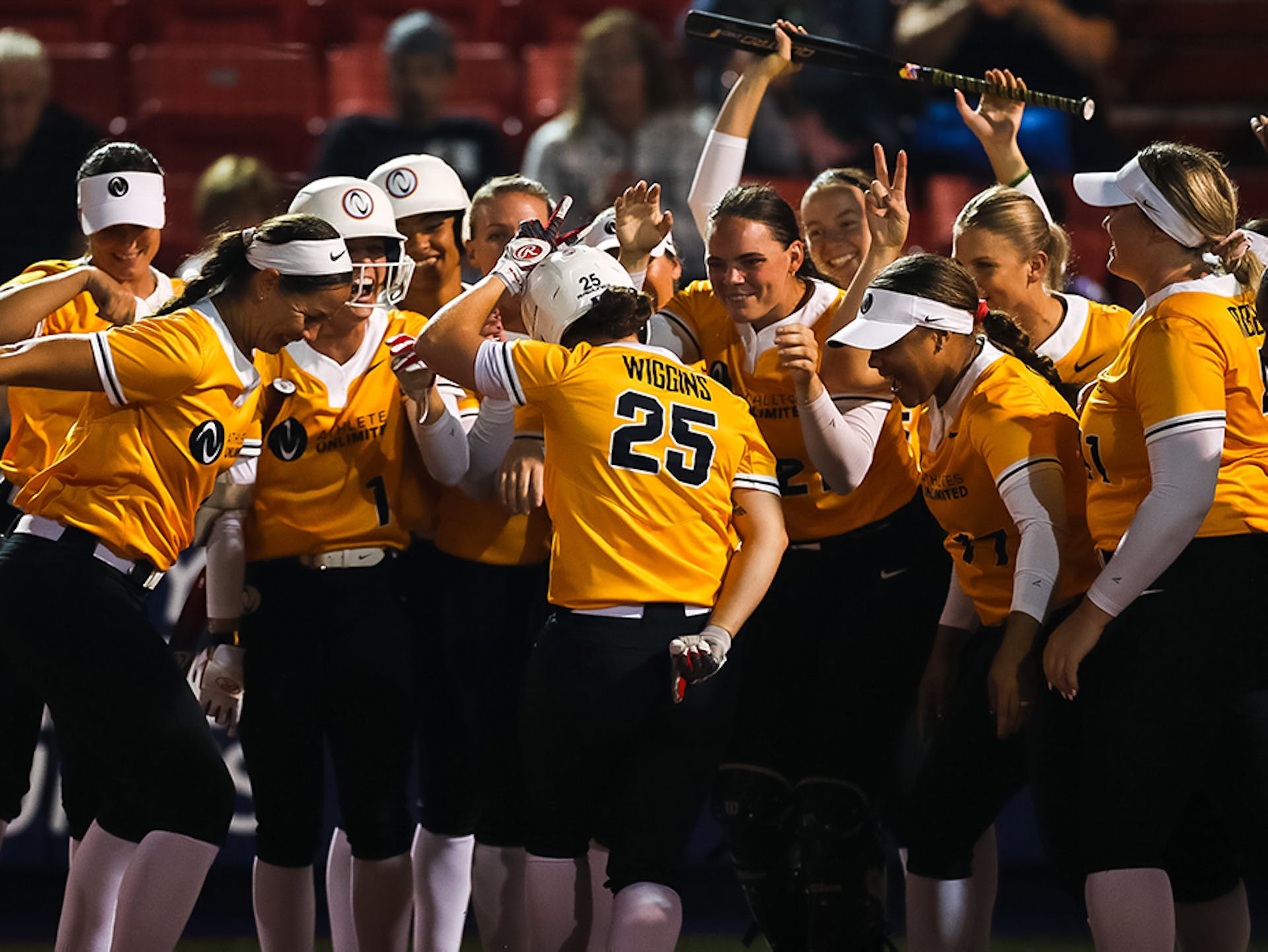 The world is spinning correctly on its axis again.

And for that we may have a – shall we say — Cat nap to thank.

A well-rested Cat Osterman was her old self in the circle Monday night as she tossed a complete-game two-hitter to lead her team to a 3-0 victory over Team McCleney (Orange) at Parkway Bank Sports Complex.

The upshot is this: Osterman entered the day eighth in the overall points standings in Athletes Unlimited Softball and was in jeopardy of not being a captain next weekend, something she said doesn’t matter to her anyway. The focus, she said, is on winning as a team.

But with her team taking all 70 innings points and 50 for the game and Osterman piling up stats points and MVP 2 points (40), she vaulted into a second-place tie with Sahvanna Jaquish on the leaderboard.

Osterman (3-2) said a couple of things helped her bounce back from a six-run outing on Saturday. One was very basic.

“I think Saturday just reminded people I’m human, it happens,” she said. “It’s not the first time in my life I’ve given up a lot of runs and lost a ballgame. It was just a matter of trusting it’s a new day. I felt completely recovered and better today. You have to have a short-term memory to be an elite pitcher.”

Osterman also took to social media Monday to say that she had gotten a lot of sleep, including a rare nap.

“If you saw Twitter at all today, I slept a lot last night and this afternoon to make sure I was rested up,” she said. “Just doing some things to recover. The grind has been a lot for all of us that came off Tokyo.”

Team Osterman scored early to pick up 10 innings points in both the first and second. Victoria Hayward doubled with one out in the bottom of the first, earning 20 points and 10 more for a steal of third base. She later came home when Jessi Warren reached on an error by third baseman Riley Sartain-Vaughan.

A two-run homer by Megan Wiggins, her first of the year, gave Team Osterman a 3-0 lead in the second.

For the final two games of this week of play, Wiggins and Hayward flip-flopped in the batting order, with Wiggins moving up to the leadoff spot Hayward dropping into the 2-spot.

“You get hits, it don’t matter where you are in the lineup,” said Wiggins, the MVP 1 of the game, getting her 60 bonus points. “As a team, you have certain people in the lineup, but once the game gets going, different situations call for different people.  Tonight was my night to get the big hit.”

In the No. 2 spot, Hayward was able to showcase all of her skill set – making contact, using her speed and finding holes. She doubled, walked, singled and stole two bases.

“As a player, my goal is to put pressure on the defense and let hitters like Wiggins and Jessi Warren hit me in,” she said. “So I was happy I was able I could put the ball where they weren’t and take advantage of baserunning, which is one of my strong suits. Happy with that. Hopefully we can get a little something rolling into next week.”

The MVP 3 of the game was Sashel Palacios of Team McCleney, who had a double. In the circle, Sara Groenewegen (1-5) worked 3.2 innings for Team McCleney, giving up four hits and three runs, two earned. Danielle O’Toole relieved her in the fourth, pitching 2.1 innings and striking out four batters.