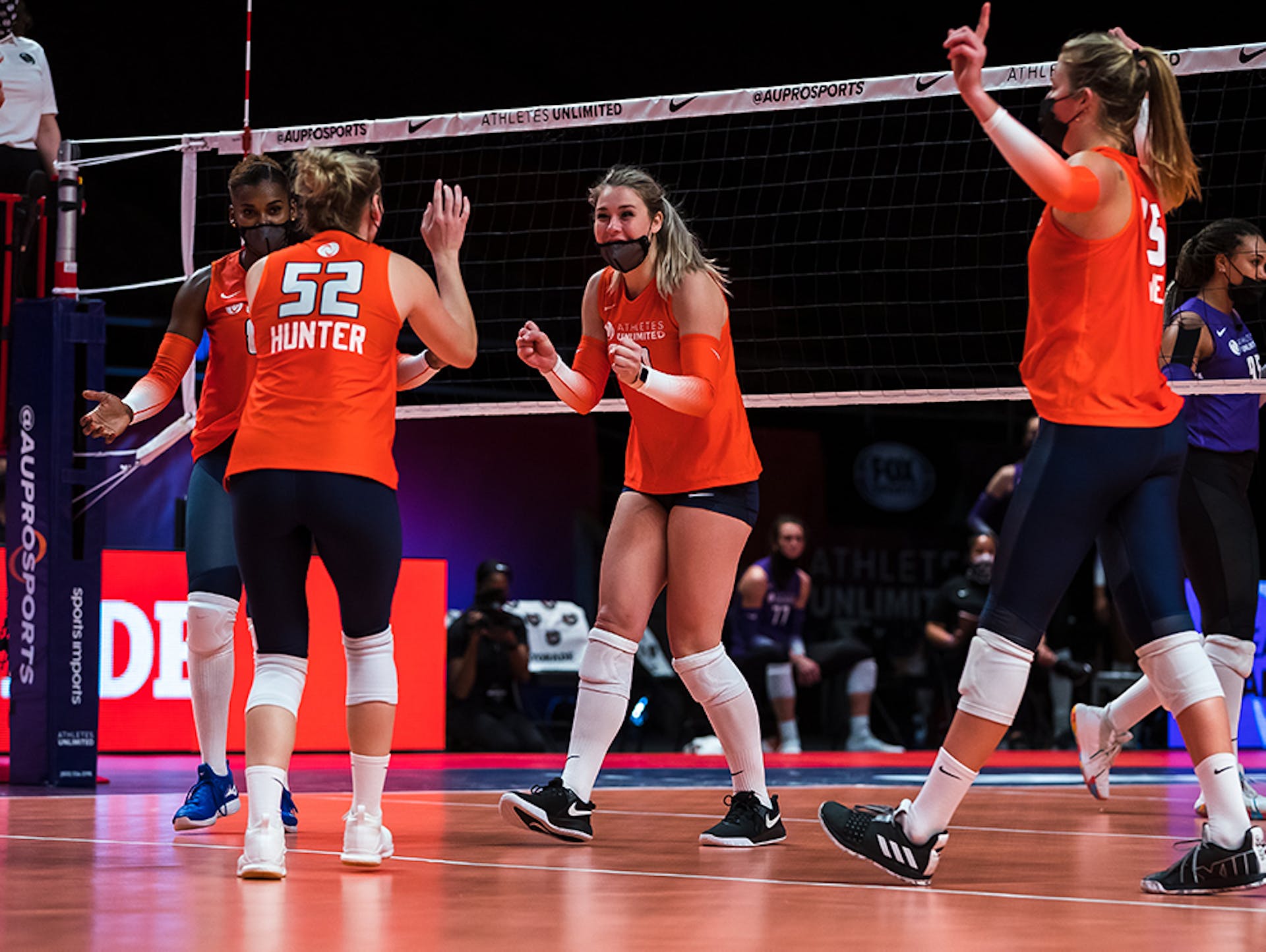 Last week, opposite Ebony Nwanebu was wearing the same colors as outside hitter Bethania De la Cruz, but in the first match of Week 3, Nwanebu found herself as De la Cruz’s competitor.

In Week 2, Team De la Cruz went 3-0 in matches. The win points, along with her overall performance, elevated Nwanebu from her position at 11th on the leaderboard to No. 4 (Purple), making her a captain for Week 3. De la Cruz improved to No. 2 (Orange), pitting her against Nwanebu in their opening match.

De la Cruz’s experience as a captain was highlighted as she led her team to victory, finishing the match 3-0 in sets with an overall score of 75-59, earning every team member 180 points.

“We did nothing special,” De la Cruz said. “We have a lot of experienced players who know how to play the game well. I feel that they did some great passing and they did what they needed to do to get the win.”

Team De la Cruz wasn’t able to separate themselves until opposite Karsta Lowe went on a five-point serving run, ending at 21-16. Her service pressure forced Team Nwanebu to use their first timeout of the set. Nwanebu’s discussion in the timeout worked in her favor, as she terminated the next set from the back row, ending her team’s point drought and following with a kill on the following point.

However, the back-to-back kills from the team captain weren’t enough for her team to earn a victory.

At 19-24, Nwanebu hit a ball that was originally called out, but she challenged the call because she suspected her former teammate, De la Cruz had touched it at the block. Nwanebu was correct, and the call was overturned in her favor, but Team De la Cruz held on for a 21-25 first set win.

At 8-14, Team Nwanebu used their first time out, allowing them to reset and respond with Crocker earning a quick kill in the middle.

Yet the kill wasn’t enough to rally her team as Team De la Cruz surged to 22-14 with a mixture of kills from De la Cruz, Lowe, and Sybeldon. A solo block from Nia Grant on a back row attack from Nwanebu at 13-20 caused Team De la Cruz to erupt into a long moment of celebration. Team De la Cruz closed out the set 25-17, earning each member 40 win points.

Team Nwanebu responded with more fire at the beginning of the third set, but was unable to maintain their fire throughout. A crucial moment came at 5-7 as Team De la Cruz used their second challenge of the set for what had been deemed a kill by outside hitter Odina Aliyeva. The original call was overturned and no block touch was called on Lowe. From there, Team De la Cruz built their lead to 13-6 before Team Nwanebu managed to score another point.

Nwanebu proved to be the main offense for her team throughout the match, scoring 16 kills and earning two blocks, scoring 132 total stat points and earning MVP 3 honors to put her at 152 points overall for the match.

However, the six kills Nwanebu obtained in the final set weren’t enough for her team to win it.

Team Nwanebu fought their way back to 21-24, but Sybeldon finished off the set with a tip over the block on a slide. Sybeldon finished the match with 11 kills on 17 attemps, one ace, and one dig, earning her MVP 2 honors for an additional 40 points, giving her 326 overall.

Team captain De la Cruz was voted MVP 1, earning her 60 points. For the match she had 17 kills on 31 attempts for a .450 attack percentage, one ace, and five digs for 376 points in total.

Lea Davison: How to win when you don't