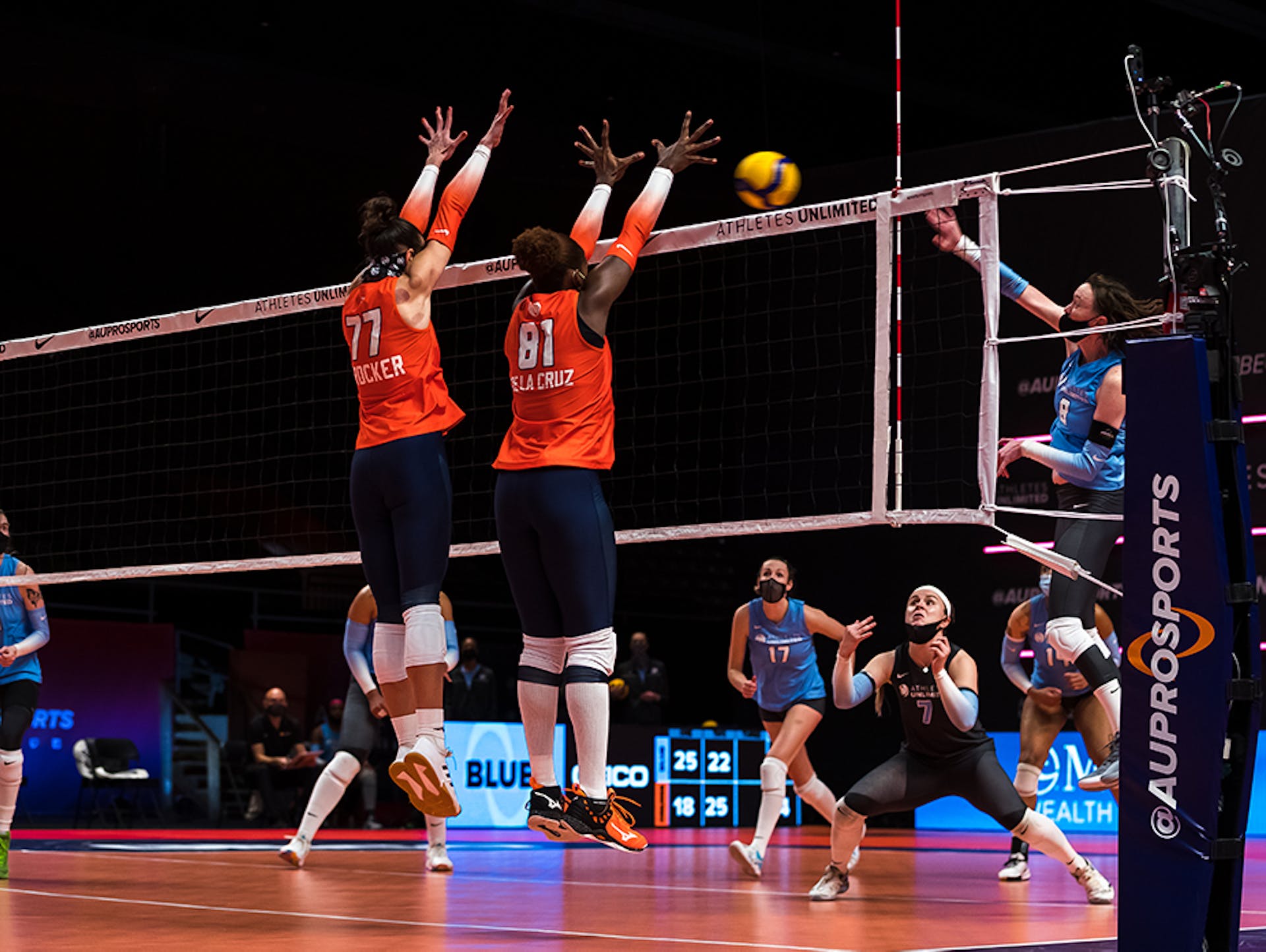 De la Cruz, a Dominican Republic Olympian, proved to be an unstoppable force for Team King in their second match of the season, achieving 21 kills on 38 attempts with only one error, earning her 230 stat points. De la Cruz was voted MVP 1, which earned her another 60 points, for 430 points overall.

In Set 1, Team Clark continued their winning streak from the previous day and won the match 25-18, which obtained each player 40 win points. Rookie Leah Edmond started the set off strong and had four kills on her first four attempts. Two kills from outside hitter Cassidy Lichtman and three kills from opposite Ebony Nwanebu helped Team Clark to comfortably lead the entire set.

In the second set, Team King began to find their rhythm. The teams traded points evenly, until three consecutive kills from De la Cruz gave Team King their first lead of the match, putting them up 9-8. At 15-16, a back row kill from De la Cruz allowed her team to further their lead, followed by an ace from middle hitter Cori Crocker. Crocker’s serves helped her team extend their lead to 18-16. From that point, Team Clark never regained a lead and Team King won 25-22, earning 40 win points.

Going into the third set, the teams had a close match-up with 100 remaining win points on the line. Although the two teams were tied in sets, Team Clark led in overall points 47-43.

De la Cruz continued to play a crucial part in her team’s offense and gained 12 kills in the third set alone. Despite her large number of kills, the set remained close until Crocker went on a four-point serving run to put her team up 22-16. Team King maintained their lead and a kill from De la Cruz ended the match at 25-18, earning Team King another 40 points and 100 points for out-scoring Team Clark 68-65.

Crocker had a stand-out performance, getting three stuff blocks, one ace and five kills for 88 of her 105 stat points. Crocker’s blocks came at crucial moments and helped her team start to gain momentum in the second set. Crocker earned another 40 points from MVP 2 honors to put her at 285 points for the match.

“Genuinely, I think it happened on our side of the court more than what I was reading [for the blocks],” Crocker said. “I was struggling to find where our seams were and get my body in front of the ball with my pin blockers. Then after Set 1, with a little bit of frustrated energy, we all came together and talked about it, and after that there was a big difference. We were able to connect together, move together as one, and it resulted in some pretty sweet blocks.”

For Team Clark, opposite Ebony Nwanebu led her squad in kills with 13 on 33 attempts for a .300 attack percentage. Nwanebu also helped her team defensively with five digs and one block. Combined with her kills, she tallied 91 stat points. Nwanebu was voted MVP 3 of the match, which earned her 20 points, to put her at 151 overall.