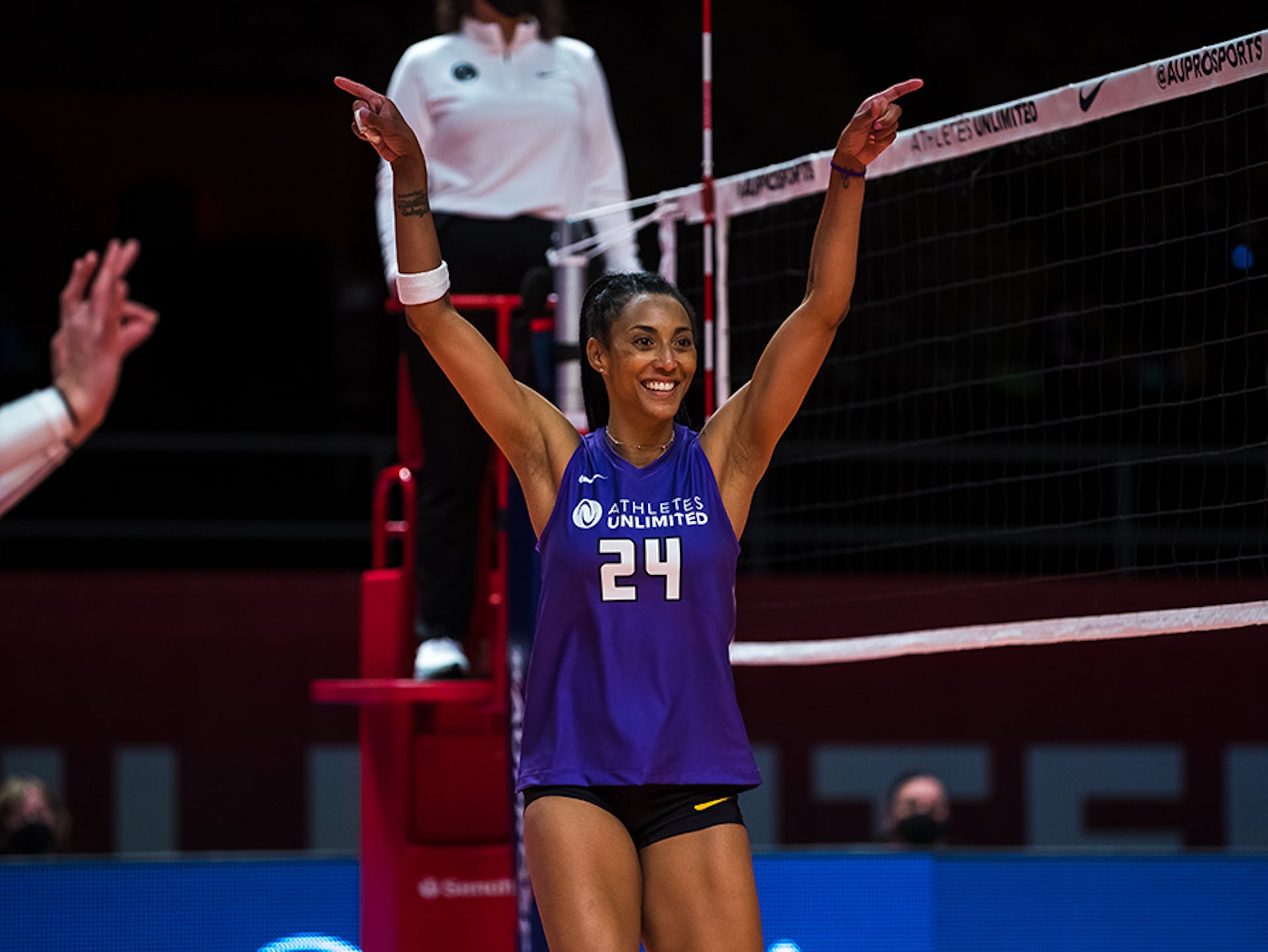 Outside hitter Aury Cruz broke the record for kills in a match with 26 in Team King’s 80-78 defeat of Team Larson (Gold). Team King also won two out of three sets for 140 win points.

Cruz was voted MVP 1 for her outstanding performance, finishing the match with the record-setting 26 kills on 55 attempts for a .350 attack percentage. Cruz also put up a strong defensive front, obtaining nine digs. She earned 374 points overall.

“I have to give credit to my other teammates, especially the middles and the opposites, because they were scoring, so it forces the blockers on the other team to think,” Cruz said. “And then our defense allowed [Brie King] to play free and run her tempo.”

The two opponents had a fiery match-up from the very beginning, going to 33-31 in the first set falling in favor of Team King.

Team King reached set point first at 24-22, but Team Larson fended off the win. The teams battled back and forth to eight ties and eight set points before Team King finally claimed the win.

While in overtime, Cruz had five kills and opposing captain Jordan Larson had three. Cruz completed the set with an impressive 13 kills and a .480 attack percentage.

In the second set, Team Larson proved unable to stop Cruz again as she gathered another eight  kills.

Team King built an early five-point lead at 11-6, but a string of plays, along with back-to-back kills from outside hitter Cassidy Lichtman, forced Team King to use their first time out at 16-13.

Team King was unable to stop Sheilla Castro’s serving streak immediately after the timeout as Lianna Sybeldon got a block against opposite Katie Carter. Cruz ended Team Larson’s run on the following point with a kill.

From there, Team King maintained their lead, ending the set with a Cruz kill at 25-22.

In Set 3, Team King built a lead at 16-10, but Team Larson slowly began to battle back.

Part of that battle was stopping Cruz, which Team Larson successfully did in the final game. Cruz was unable to gather another kill for the rest of the match.

Team Larson strung together multiple serving runs by running an efficient offense that minimized their attack errors. Their improved offense helped them overtake Team King and reach set point at 24-20. Team King prevented Team Larson from winning the set for two points, but a fatigued Cruz had a serving error to end the match at 25-22.. Each member of Team Larson earned 40 points for the set win.

Libero Kristen Tupac also had a record-setting night with an incredible 24 digs. On numerous occasions, the libero saved a hard-hit ball with one hand as she dove after it or had a “pancake” to prevent a tip from finding the floor. For her performance, she was voted MVP 2 for 40 points, placing her at 338 for the match.

Heading into the final day of the season on Monday, March 29, Jordan Larson sits atop the leaderboard with 4,263 points and a healthy lead of 768 points over Karsta Lowe, who currently sits in second place with 3,495 points. Bethania De la Cruz sits in the No. 3 spot only 54 points behind Lowe, while 47 points separate De la Cruz and Brie King at No. 4.

To close out the season, Team King will play Team Lowe at 3 p.m. ET/ 2 p.m. CT and Team Larson will face Team De la Cruz at 7 p.m ET/ 6 p.m CT. Both games will take place on CBS Sports Network and will be followed by the Athletes Unlimited Volleyball Closing Ceremony, which will be hosted live on Facebook, where the champion will be crowned.

“I think it’s going to be pretty emotional, judging that we’ve spent so much time together these past five weeks in a shield,” Team King middle blocker Taylor Morgan said. “We’ve developed bonds and close connections with our teammates and everyone, so I think it’s just going to be a lot of emotions. Karsta Lowe’s team is going to be really good, so we just have to come out strong, stay focused, really grind, and keep our emotions in check to just keep battling.”