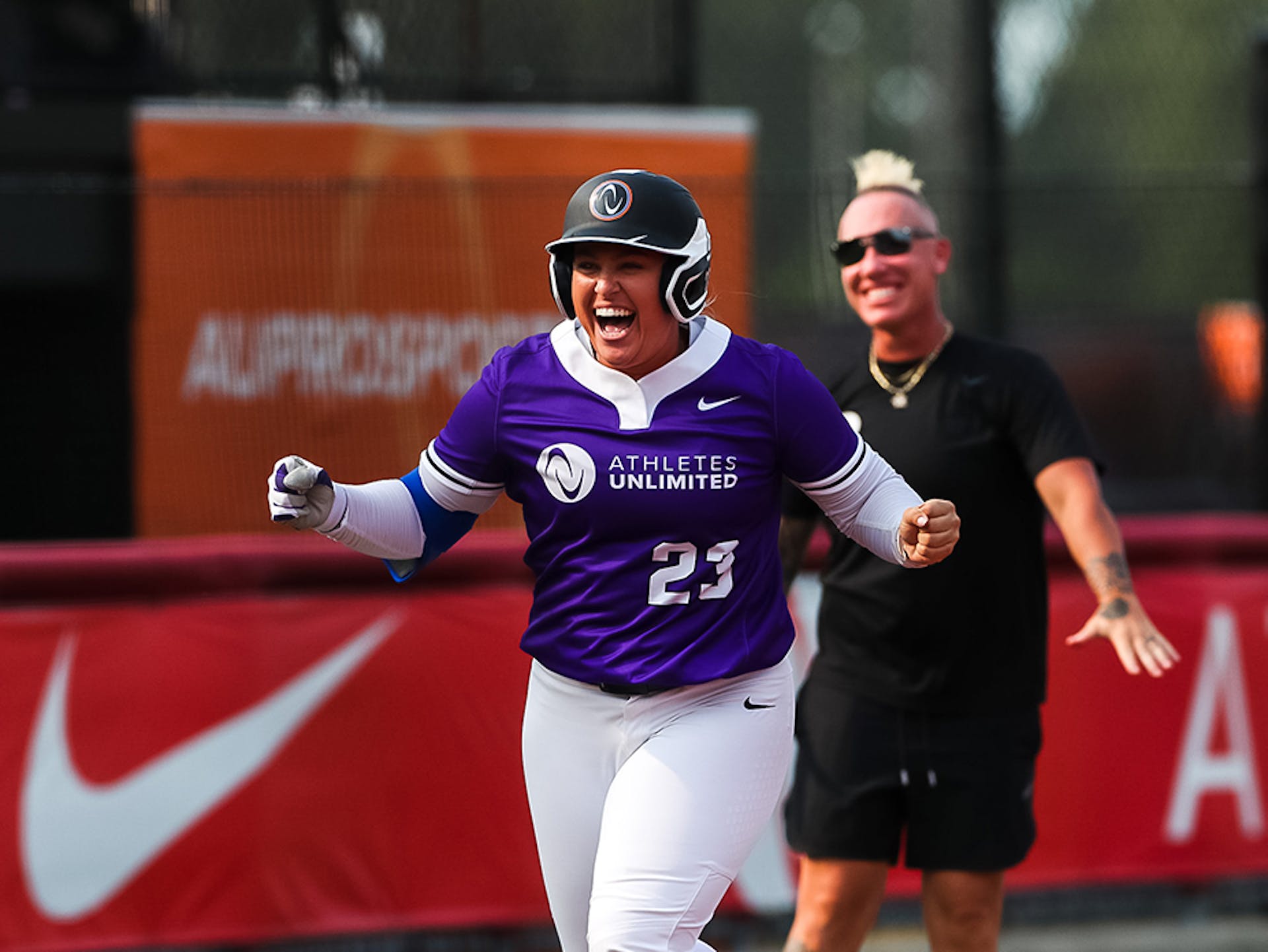 Aleshia Ocasio has been an Athletes Unlimited captain before, so when she was thrust into that role for this weekend, it was no problem.

Ocasio also knows a little something about fellow Florida Gator Amanda Lorenz. When Ocasio took Lorenz with her fourth-round draft pick for this weekend, it shouldn’t have come as a total shock.

Lorenz more than justified Ocasio’s faith in her Saturday by blasting her first two home runs to help lead Team Ocasio (Purple) to a 6-2 victory over Team Osterman.

“I texted her after the draft, and I was like, ‘Just have fun. I know what you’re going to do.’ I was like, ‘Are you ready to hit in the leadoff spot?’ She’s like, ‘I’m ready.’ So automatically I knew she was going to have a big contribution to this team. I think she broke out of her shell tonight. I’m excited to see what she does the rest of the weekend.”

There was no score until the bottom of the third inning, when Lorenz homered with one out against Cat Osterman, a drive over the all-in center. She hit a three-run homer in Team Ocasio’s four-run sixth inning to give her mates a 6-0 lead.

“Honestly, I’ve been really struggling, and just to do anything for my team positively contribute to a win just feel so, so good,” said Lorenz, who gained 60 points for being named MVP 1 of the game in addition to 80 stats points for the homers. “Obviously, hitting against an incredible pitcher like Cat is exciting, but all my focus is on my team, and I was really excited to do something for a team.”

This is Lorenz’s first year with Athletes Unlimited. It was a big day for newcomers in both of the day’s games. Earlier Saturday Dejah Mulipola and Bubba Nickles enjoyed breakout games.

“It’s just been an incredible, professional environment, surrounded by other amazing women who are really inviting and rooting for everyone’s success,” Lorenz said. “They really have something about them that makes everyone better.”

Ocasio (3-2) was the game’s MVP 2, good for 40 extra points. With the team’s win and the points she earned during the game, Ocasio vaulted into top spot in the overall leaderboard, with 951 points. She pitched six-plus innings, giving up seven hits and two runs. They came on back-to-back homers by Gwen Svekis and Kelsey Stewart to start the seventh. After Ocasio walked Jordan Roberts, she took herself out of the game in favor of lefty Haylie Wagner, who gave up one hit but otherwise shut the door.

Osterman (2-2) worked six innings, giving up six hits and all six Team Ocasio runs. She went from 830 points to 852, but she dropped to fourth overall.

One of the hits off Osterman was a pinch-hit single by Taylor Edwards in the fourth.

“I have hit off Cat a long time, and internally, I’m very comfortable off of her,” said Edwards, the MVP 3. “I spent the last two years training with her. Just to be able to remember those good at-bats I’ve had off of her before in whatever role it is – pinch hitting, catch, DH, whatever it is – just being able to be ready in that situation and control me and my breathing and be ready for my opportunity.”