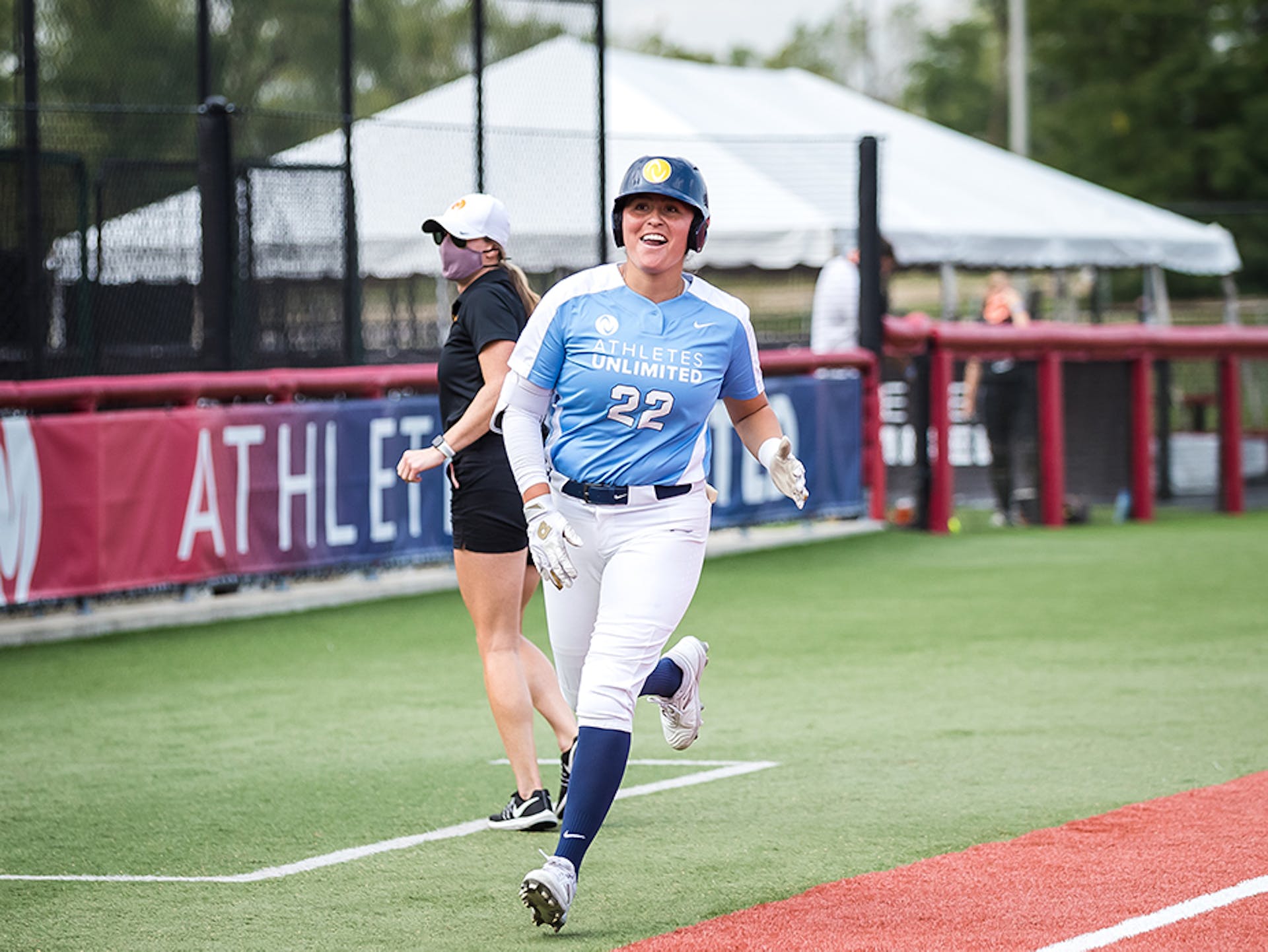 The first inning for Team Reed went like this Monday: Bunt … bunt … bunt … (get ready for it) … BANG!

The bang came when the fourth batter of the inning, Hannah Flippen launched a grand slam over the center-field wall. Total distance: about 230 feet.

That wasn’t all. Before the inning was over, Team Reed totaled eight runs, thanks in part to a three-run homer by Amanda Sanchez and a solo homer by McCleney in her second at-bat of the inning.

That sent Team Reed on its way to an 18-1 victory in the afternoon portion of Monday’s doubleheader at Parkway Bank Sports Complex in Rosemont. Team Reed became the second team in two days to put up an 8-spot in the first inning. Team Osterman did it Sunday, also against Team Sanders.

Team Reed finished Week 3 of Athletes Unlimited play with a record of 1-2. Team Sanders wound up 0-3.

The first-inning blitz right off the bat made all the difference Monday.

“Yeah, the plan was to put all our fast kids at the top and on base and put some pressure on the defense,” said Flippen, who gained a share of the overall lead in home runs with four. “I looked for a ball that I hit hard, and I’m happy that I put it over the fence. I’m pretty happy about that.”

Team Reed never let up. Tori Vidales singled and was forced at second base before Lilli Piper walked. That set the stage for Sanchez, who launched her first homer of the season. She added another three-run homer in the fifth for a six-RBI day.

“It was just awesome,” she said. “Our whole lineup is so talented 1-9, and to have that speed at the top of the lineup and then everyone just being able to factor into our win today was awesome thing to be a part of.”

For her efforts, Sanchez was named MVP 1 of the game, earning an additional 60 points to her 110 stat points and 120 team points. Flippen earned 40 MVP 2 points in addition to her 80 stat points for the game.

It was a redeeming victory on many fronts for Team Reed, which was victim to a four-run rally in the bottom of the seventh Sunday by Team Piancastelli, which emerged with a stunning 8-7 victory.

The beneficiary of the offensive outburst was starting pitcher Danielle O’Toole, who gave up the game-winning home run to Caleigh Clifton on Sunday but only after an error to start caused all the runs to be unearned.

Seemingly unaffected, O’Toole went out Monday and pitched five innings, giving up four hits and only a first-inning run.

O’Toole was candid about the carryover effect from Sunday.

“It never left my mind,” she said. “It fueled my fire a little bit. I definitely think this week has been a little more eye-opening for me, but I had a great defense me that was talking to me the entire time, and that helped a lot this week. I did not forget about it (Sunday). It just helped me even more today.”

O’Toole was named MVP 3 of the game, getting 20 additional points in addition to her 50 stat points.

Speedster Zerkle had 60 stat points, with 30 coming on a triple and another 10 resulting from a stolen base.