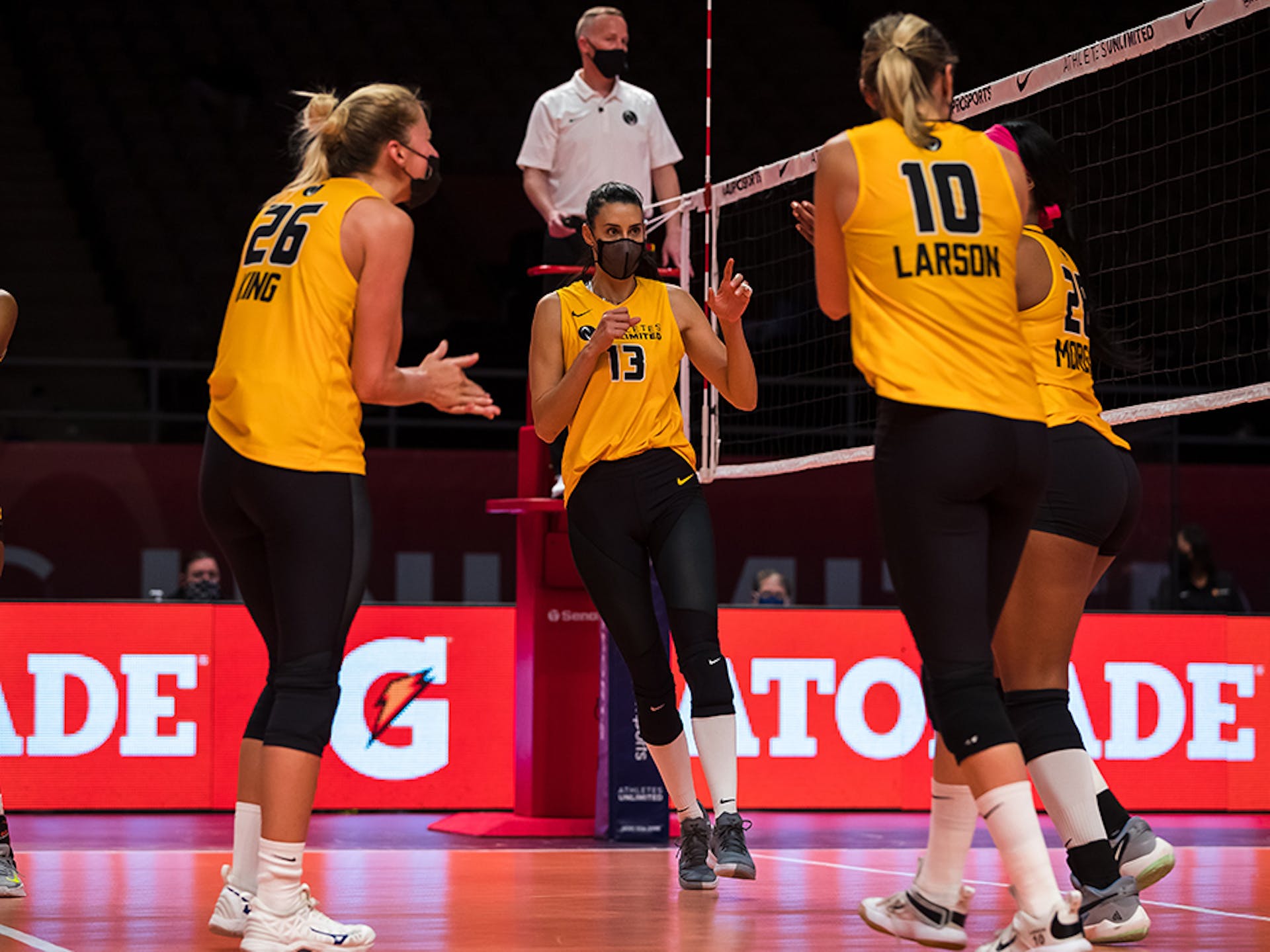 Even a marathon first set from Saturday night that ultimately ended at 37-35, couldn’t stop Team Larson from finding their strength to win tonight’s match 70-54, winning two out of three sets and earning 140 win points.

Team Larson was able to win the match as multiple players on the team earned numerous kills, while opposite Ebony Nwanebu earned 15 kills for her team, with the next highest earner being outside hitter Symone Abbott with six.

For Team Larson, Larson finished the match with 15 kills, Deja McClendon had 11, and Sheilla Castro obtained 10.

Despite their long match the night before, Team Larson came out strong and dominated the first set, winning 25-13.

“I was just really proud of our team from our fight yesterday. It was a little bit exhausting, so I just said, ‘Try and get some sleep,’” Larson said. “You know your body, so take it easy if you don’t want to do [serve and pass], and make sure you get a nap and eat well and then come back refreshed. And I feel like we showed up well today, especially at the start.”

At 11-6, the two teams had an extended rally that was reminiscent of Team Larson’s match the night before. Ultimately, a tip kill from Sheilla ended the play and allowed Team Larson the momentum to continue building their lead.

In the second set, Team Nwanebu took the early lead, jumping ahead to 7-3. Improved passing on Team Nwanebu, along with two stuff blocks on Larson, allowed for the lead.

Although Team Larson dropped the set, they managed to close the 8-point lead that Team Nwanebu had built to finish the set 20-25, helping Team Larson maintain their match lead. They entered the third set ahead, at 45-38.

In the third set, Team Larson emerged from their sideline huddle looking more relaxed and in control of the energy in the gym. A challenge on the first point overturned a block touch call in Team Larson’s favor. From there, Larson capitalized on the opportunity and obtained three aces in a row. Those aces, along with back-to-back kills from Sheilla, put Team Larson at an early lead of 7-2.

A serving run from Sheilla allowed Team Larson to build their lead to 11-4, but a solo block by Abbott against middle blocker Molly McCage ended the run.

Although the block was followed by a burst of energy from Team Nwanebu, it wasn’t enough for them to make a comeback and Team Larson maintained their lead to win the set 25-16.

Sheilla finished the night with three blocks and 10 kills on 28 attempts for a .290 attack percentage, being voted MVP 2 for 40 additional points and 324 overall.

McClendon also had an incredible attack percentage, ending the match at .380 with 11 kills on 24 attempts. She also put up a strong defensive front, gaining the most digs on her team at 14. McClendon was voted MVP 3 for an additional 20 points and finished the match with 309.

“This was the first time I’ve played with some of the girls on this team, and it’s my first time with Brie [King],” McClendon said. “Just working on that tempo and making sure I stayed high on my swing was really important this week and I feel like I got the groove there.”