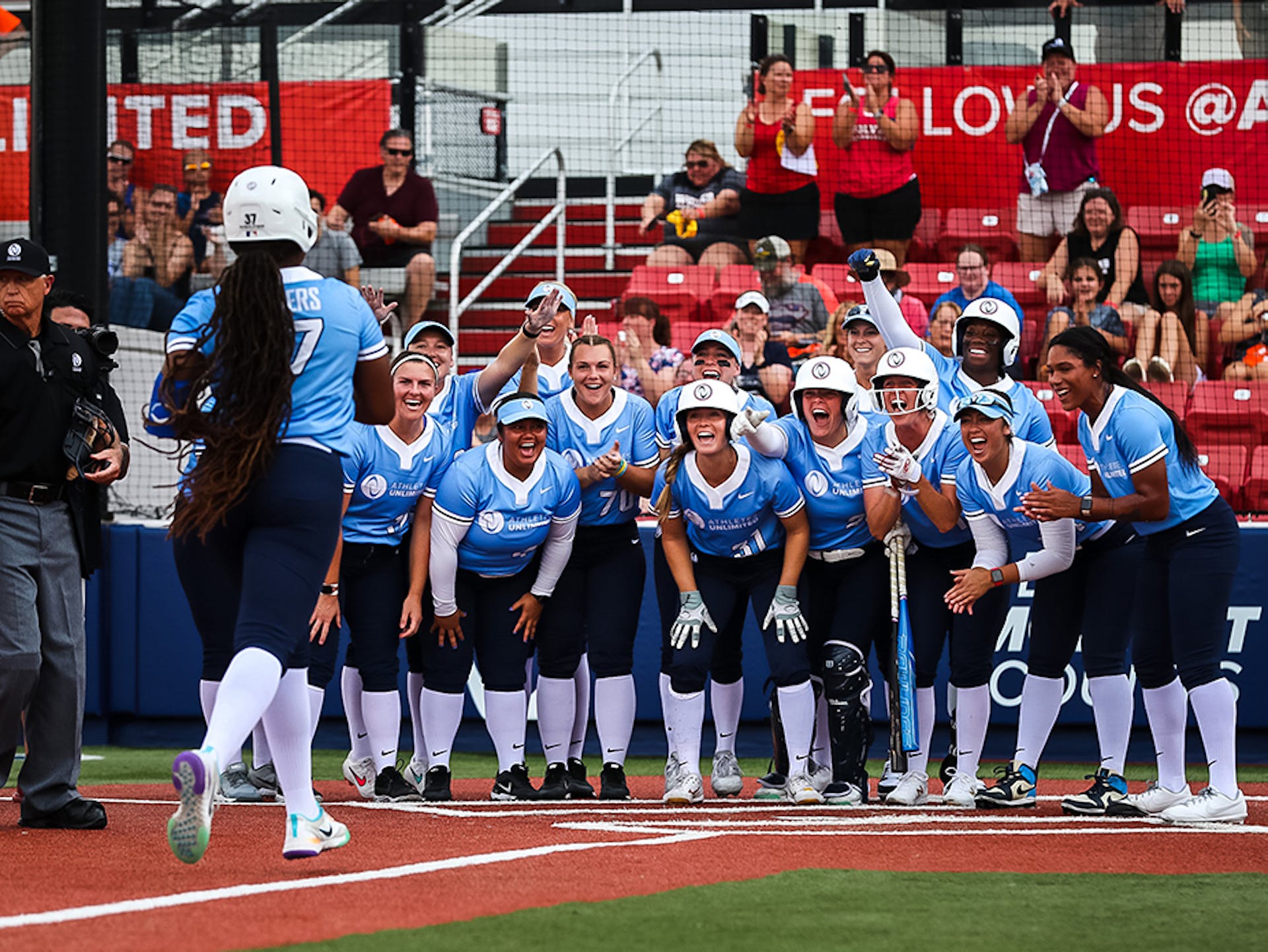 Opening Day 2.0 of Athletes Unlimited brought so many things to the Parkway Bank Sports Complex in Rosemont, Illinois.

Best of all, Saturday’s opener brought out fans – loud, enthusiastic softball fans of all ages who made their presence felt all afternoon.

Those fans were treated to a little bit of everything, including scorching heat and a cooling cloudburst, which brought welcome relief for about 10 minutes at the end of the second inning.

The spectators got what they came for in softball action, as Victoria Hayward’s team (Blue) put on a power and pitching display in a 6-2 victory over Jessica Warren’s team (Orange). Each player on Team Hayward received 50 points for the win and 50 more innings points.

Last season was played in an empty ballpark because of COVID-19, but there was an uplifting energy coming up from the field and echoing back down from the stands.

“You could definitely feel the difference,” said Team Hayward’s DJ Sanders, who gave the proceedings liftoff with a three-run homer in the top of the first inning.

Hayward, the only player to bat leadoff in all of her team’s games last season, fittingly opened Saturday’s contest with a walk and a stolen base.

After Hannah Flippen grounded out, Ali Aguilar was hit by a pitch from Danielle O’Toole. Sanders followed with the first home run of the Athletes Unlimited season, a high drive over the wall in left field. That earned Sanders 40 individual points. She also earned 60 points for being voted MVP 1 of the game.

“It was all of my hard work that I’ve been putting in paying off,” Sanders said. “And with my teammates and everything, it was a perfect moment.”

Team Hayward made it 5-0 in the fourth on solo homers by Gwen Svekis and Morgan Zerkle. That added 40 individual points to the 20 Svekis picked up in the first inning, when she doubled.

Team Warren got on the board in the bottom of the inning when Amanda Chidester led off with a home run to left field against Aleshia Ocasio.

Team Hayward got a leadoff homer from Morgan Howe in the top of the seventh. Howe, who hit two homers over the scoreboard in right-center last season, pulled a pitch from Jessica Burroughs down the line in right.

Ocasio picked up the victory with four innings of three-hit, one run ball. She got strong relief work from Amber Fiser and Haylie Wagner. Ocasio is a returning star who had her 2020 season interrupted when she had to go home for personal reasons.

So Saturday’s performance was special.

“It meant the world to me,” she said. “I just wanted to go out there and compete and get this win under our belt. But I was just excited to be out there. There were some nerves, but Gwen called a great game (behind the plate). We worked really well together. I’ve known her since I was in high school. I would say we did pretty well together. DJ threw up a three-run bomb and opened it up for us. It was just a great team effort.”

Ocasio was the game’s MVP 2, earning her 40 points. Amanda Chidester from Team Warren homered and singled to gain MVP 3 honors.

The big crowd also included many friends and family, including Svekis’ family.

“The fun of playing the games was a little bit more than it had been in past games, especially last year,” Svekis said. “The noise from the crowd gave us a lot of momentum when we got up. That meant everything.”

After the game, Svekis took to the stadium microphone and told the many young softball players in attendance that “you can be us one day.”

“A lot of dreams come from being able to see people involved in professions, not only for softball, but for a lot of other sports – to see pros in that arena and to dream to be there,” she said when asked about that. “I just wanted to let those girls know they could do anything they set their minds to.”

Welcome to the New Age of Competition