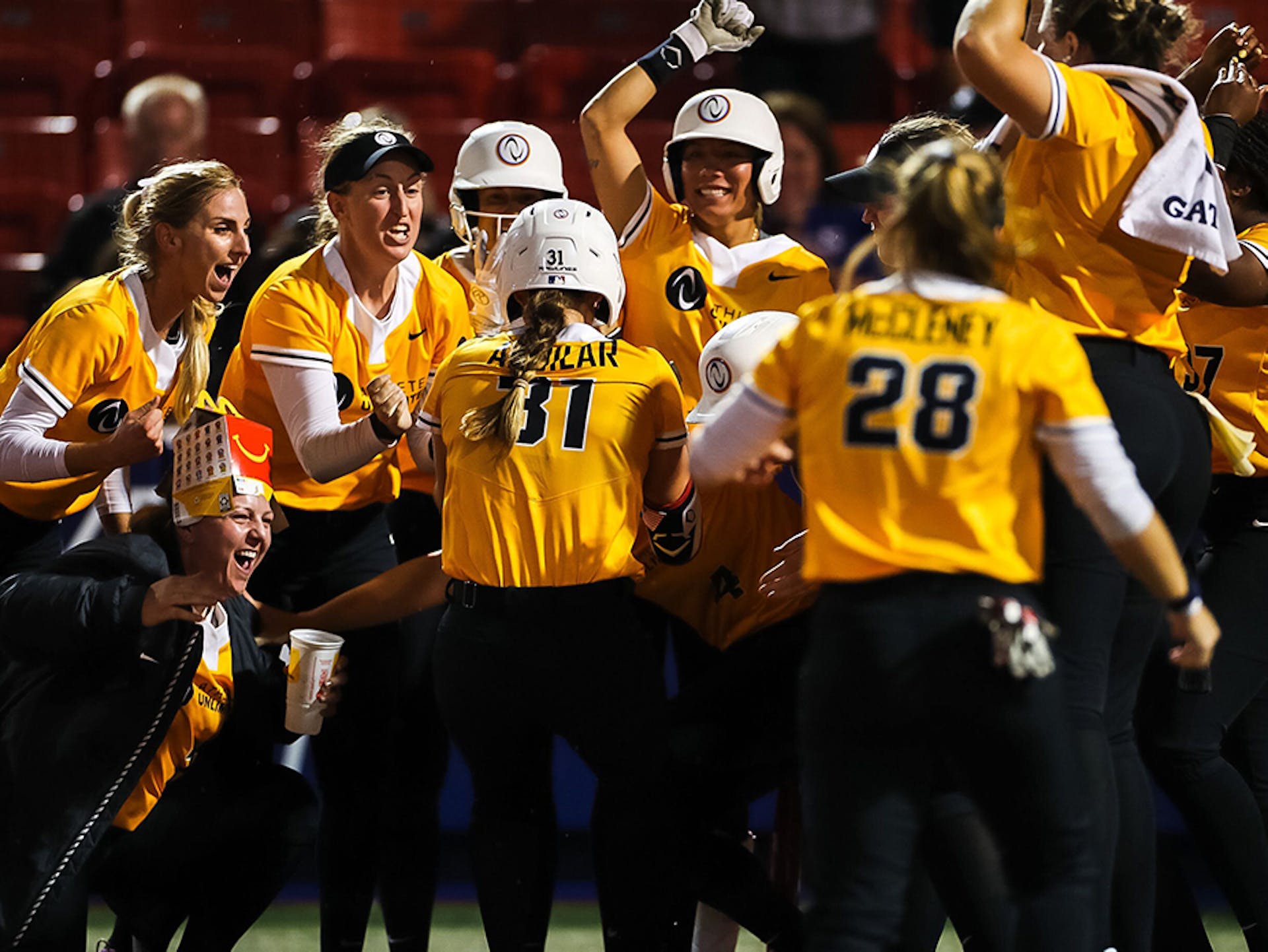 Go ahead and have yourself a weekend, Carrie Eberle.

In the two-year history of Athletes Unlimited Softball, Eberle enjoyed the best week of play of any pitcher not named Cat Osterman.

In Monday night’s late game, Eberle put the capper on a three-day run of success with a complete-game 2-1 victory for Team Gold over Team Orange.

It was Eberle’s third start in three games of Week 4, and all she did over those three days was pitch 17 innings and give up only two runs on 13 hits. Teammate Ali Aguilar put Eberle and Team Chidester (Gold) over the top with a leadoff home run in the bottom of the sixth inning against Haylie Wagner, who had just come on in relief of Alyssa Denham.

For her heroics, Eberle was named MVP 1 of the game, good for 60 bonus points.

Rookie Eberle moved up on the overall points leaderboard from sixth to third, with 1,378 points. That means she will be a captain for the final weekend of games.

“It’s unbelievable,” said Eberle, who gave up four hits while walking two and striking out four. She stranded a runner at third base to end the game. “The team chemistry and everything came together so well, and I just had all the confidence in the world.”

There was no doubt Eberle would take the ball again Monday

“Chiddy checked in with me to make sure I was feeling OK,” she said. “She had confidence in. It’s so fun to play for her. I was ready to go. I was happy to get the ball again.”

Chidester did not take a pitcher until the third round of the draft for this round of play, but Eberle was her pick.

“She did phenomenal,” said Chidester, who had two singles and a double. “We had been on the same team quite a few weekends, and I just saw the potential. I loved her calm presence for the start of the games.”

Two rookie pitchers displayed veteran calm and cool in this prime-time matchup. For Team Jaquish (Orange) Denham followed up on her successful start on Saturday by working five innings and giving up five hits and one run.

Captain Sahvanna Jaquish got her team on the board with her fourth home run of the year leading off the top of the fourth. With two outs in the home fifth, Chidester singled and came home on a double by Haylie McCleney. That stood until Aguilar homered to start the sixth against Wagner.

“I just know she likes to go right at hitters,” Aguilar said. “Our game was tied, so I wanted to make something happen, and I got a good pitch to hit. So I went for it.”

In the top of the seventh, Jessi Warren opened with a single against Eberle and went to second on pinch hitter Morgan Howe’s sacrifice bunt. Eberle bore down and struck out Sashel Palacios. A wild pitch put the runner on third, but Eberle got Shelby Pendley to fly out to end the game. That was the exception in this game, as Eberle got 14 outs via groundballs.

After coming in as rookie, Eberle now is a captain, which means she has to prepare for a draft.

“I don’t know about that,” she said with a laugh. “We’ll get it figured out.”

Chidester said she’d love to keep this team together, but she’ll have to live next weekend without Eberle.

“That’s what she said to me after,” Chidester said. “She said, ‘Now I’m captain and you can’t pick me.’ I’m like, ‘Dang it.’ Honestly, I don’t know if I would have been able to grab her anyway. Carrie did so well this weekend, someone probably would have picked her up like that. It’s just tough.”

But not as tough as Eberle was all weekend.