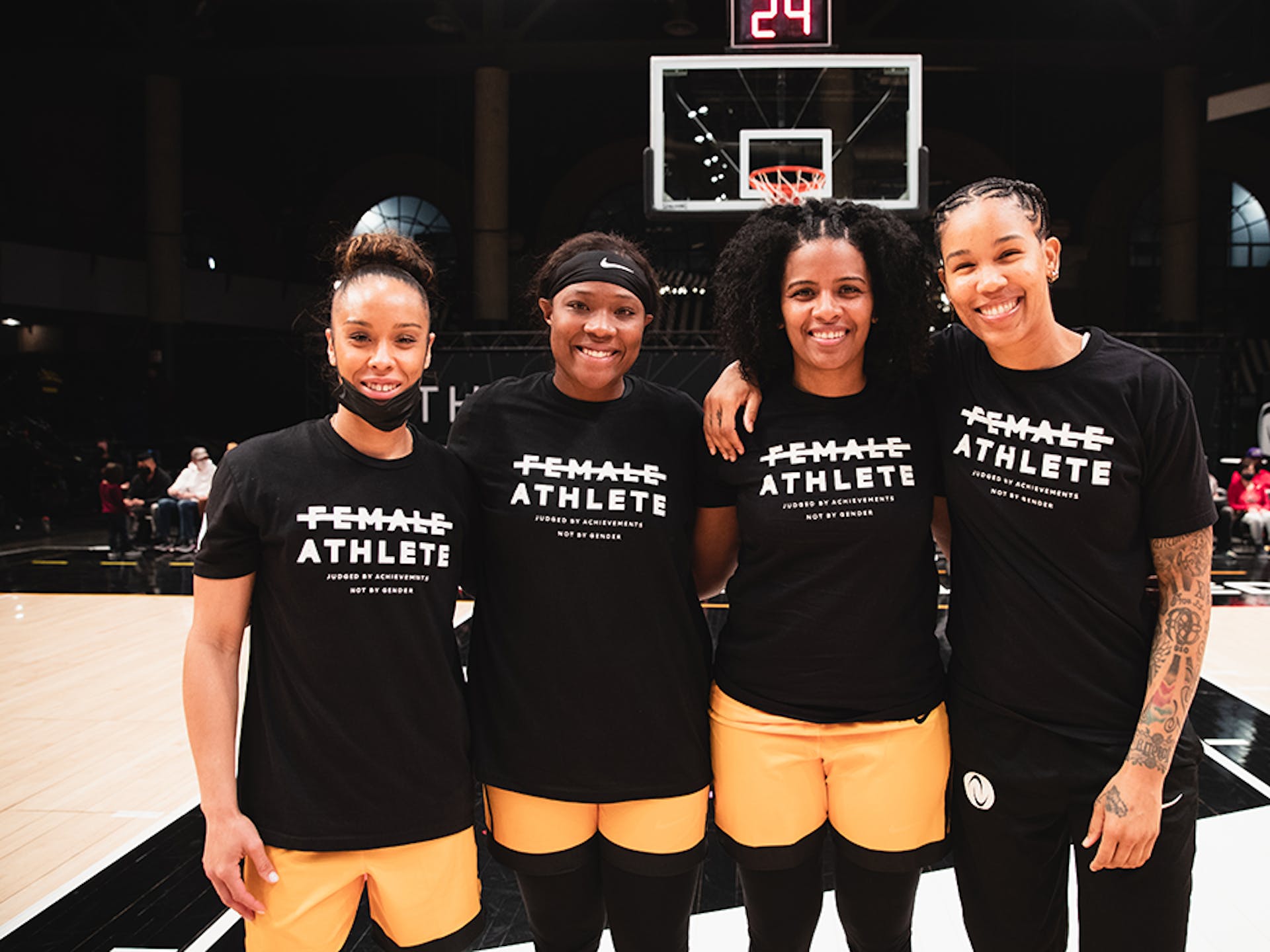 Entrepreneur Esther Wallace is providing the representation she lacked

The CEO of Playa Society shares her entrepreneurial journey

Athletes Unlimited has collaborated with Esther Wallace, founder of Playa Society, on a t-shirt to celebrate Black women in sports.

A couple of years ago, Esther Wallace got a direct message on her social media. Not a message from one of the 15,000 followers of her brand Playa Society’s Instagram – her personal instagram.

It was from a middle school girl who plays basketball and she wanted Wallace to know how much she loved not just her Playa Society t-shirts and merch, but the brand itself.

“All this time, I’ve had my head down, working hard and building this brand,” Wallace reflected. “But now I’m realizing that there are people who are seeing this – young girls who look like me and now they’re being inspired…to go and let their passion take them.”

Throughout Wallace’s life and career, she’s sought that same inspiration but more importantly, the representation she gave that middle school baller, only for it to be severely lacking.

It took going to her first women’s college basketball game at 15 years old and seeing strong, fearless women that looked like her for Wallace to realize she wanted to be an athlete too.

She went on to earn a Division I scholarship to Fairleigh Dickinson University in New Jersey and continued that passion after school, competing professionally overseas. Wallace wonders what if that representation had come sooner? What if she had positive, strong, Black women in sports to look up to growing up?

“What if I’d seen Lisa Leslie in the media as often as I’d seen Michael Jordan?”

All these questions led to the birth of Playa Society.

Wallace and her brand filled an empty space that so desperately needed filling. Female athletes wanted merchandise that represented their experience and boy, would they wear it. For three years, Wallace sold one design: the “Female Athlete” shirt.

“I remember day one of launching Play Society and being nervous to put the “Female Athlete” t-shirt out there. Athletes of all levels – high school, middle school, professional – have worn that first t-shirt. I’m super proud of where I started,” Wallace said.

Now you can dress in Play Society’s women’s sports drip from head to toe – from hoodies, to shorts, socks and even coloring books. She’s collaborated with brands like Eastbay, the WNBA and Athletes Unlimited.

“I’m proud of being able to partner with other brands and for them to say to me, ‘You know, we believe in your vision.’ To me, that’s the challenge as an entrepreneur…to get from the point where you have a vision that you believe in and then get other people to understand it.”

What most people don’t know about Playa Society is that it’s all Wallace. With Playa Society’s well-run social media presence, graphics and website, many assume it’s a team of people behind the brand. She actually just hired her first part-time team member a few weeks ago.

Going at it solo, this entrepreneurial journey has been no easy feat. For three years, Wallace shipped out about 300 orders of the “Female Athlete” shirts a month while working a 9-to-5 and in an entrepreneurship program. She committed to Playa Society in March 2020, quitting her full-time job.

A post shared by Esther at Playa Society (@es_wallace)

She went all in on her passion amidst the pandemic and doubts. And it paid off. Sales doubled, the brand grew. When young girls reach out to Wallace for advice or guidance she shares two things with them.

“Confidence is a choice and it’s something that you work at. I think a lot of times, as a young person, you think that it’s just something that happens but it’s an active choice. Every day that you choose to believe in yourself and be confident, then you’ll be able to tackle any situation that’s thrown at you,” Wallace said.

Confidence is a choice and it's something that you work at... The second thing is: always lead with your passion. Let that be enough.
Esther Wallace,
CEO and Founder of Playa Society

That’s the mantra that Wallace aims to live by but that doesn’t mean she hasn’t questioned her own confidence and passion. When she reflects on when she first started Playa Society four years ago, she noted how the entrepreneurs she was meeting and networking with did not look like her.

“I struggled so much when I first started, because I felt so disconnected from these entrepreneurial stories and journeys that I was hearing. I would question, ‘Can I do it? Are my vision [and] are my dreams valid?’ Because they don’t seem to line up.”

Wallace may not have had that representation at the beginning of her career as a designer, entrepreneur and small business owner, but now she is that representation for so many. Not only through her designs for women in sports but the courage, creativity and wisdom she holds as the founder and CEO of Playa Society.

“I go back to that DM that I got from that young girl that became the momentum and the motivation. I can’t let her down. I can’t let all the other girls like her down, Wallace explained.

“There’s a girl who’s gonna be in the position where I was in and she’s gonna need to see this reference. And I hope that I can be that for her.”

How Nicole Newman came back stronger after Tommy John