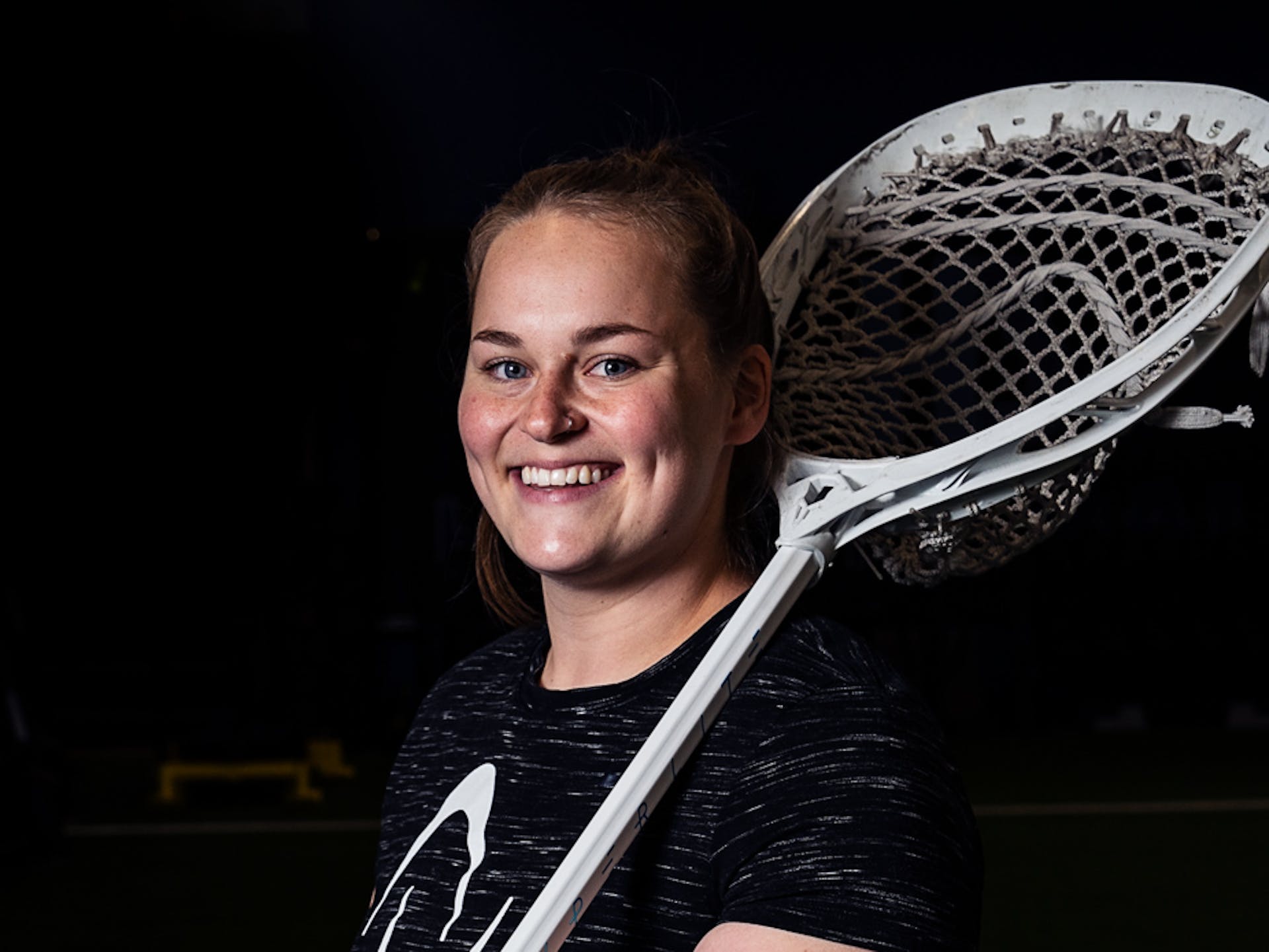 Molly Wolf: How My Coming Out Inspired a Generation

Since the very first time I ever saw lacrosse being played, I knew I wanted to be a goalie.

Diving around in the dirt? Check.

I was around six or seven playing on my older sister’s team and right away, the position just clicked with my personality. The aspects of being a goalie that a regular person might shy away from — the pressure, the goofy pads, having a hard ball hurled at your body at very high speeds — were all things I loved. You’re the first line of offense and the last line of defense, and every bruise is like a badge of honor representing the effort you gave to your team.

Sure, it might just be that I have a screw loose that makes me find enjoyment in pressure and pain (at least that’s what my parents would tell me). But inside that net was always a place where I felt like I could be myself and be celebrated for it.

I guess from that perspective, it’s not a surprise that for most of my life, I poured my whole identity into lacrosse. It was easy to, honestly. I loved it. I was “Molly Wolf, lacrosse goalie” before I was anything else. That was how other people viewed me, and I liked it that way because it was a way to cover up the parts about me that I didn’t want to acknowledge.

Being a goalie isn’t just about sacrificing your body and anchoring your team, it’s also extremely mental and very isolating in many ways. That was another quality about the position that I think I identified with easily because for most of my life, I felt like I was hiding behind a mask.

And that didn’t change until one day when I was in 12th grade and, in front of my entire high school, I very publicly came out.

There wasn’t one specific a-ha moment when I knew I was gay. Growing up there were definitely some instances that might have been pretty decent hints.

I still remember in middle school there was a roller skating dance. I went to a pretty small all-girls private school, so this dance was a big deal because boys from a nearby school were also attending.

Beforehand the other girls were all applying mascara and putting on short skirts — doing all the things teen girls do when they’re trying to impress guys. That wasn’t on my radar though. To me, I just viewed the dance as an opportunity to skate my ass off. I put a football jersey on, and the entire night, I tried to skate as many laps as I could. I viewed it as a fitness test as much as anything, and from my perspective, I crushed it.

The energy I saw other girls put into attracting the opposite sex, I poured into competition. It was easier that way, rather than acknowledging a really difficult truth. When I was growing up, there wasn’t a lacrosse player who was out that I could really identify with, so instead I tried to just push aside that aspect of my identity.

I do still recall the tense feeling I would get when my friends would talk about the guys they had a crush on. I would either stay quiet or just not engage, mostly because I couldn’t relate. I never had that experience of seeing a guy and thinking that they were cute.

As much as I tried to ignore it, the topic of sexuality came front and center for me near the end of 10th grade. That was when my parents separated after 23 years of marriage, and not long after, my mom came out to all of us.

It was a lot to process. Being from a small community, everyone knows everyone else’s business so it was kind of a scandal. Beyond that, it happened at a time when I was grappling with my own sexuality and contemplating how to discuss it. I was honestly very happy for my mom, but I also felt like it would feel like overload if I came out as well. Like, What’s wrong with the Wolf family?

Being closeted is a very mentally draining experience. I definitely had nightmares about how people might respond if I ever came out. But being able to see how others rallied behind my mom and how truly relieved and happy she seemed put some of those fears to rest. It wasn’t all rosey. She told me about how some members of the community weren’t so nice to her after she came out. But without question her strength gave me strength.

At my high school, every senior is required to give a speech about a topic of their choice before graduation. The speech topics range from showing dogs to expressing a love for cooking. It’s all over the map. After some consideration, I made the decision to use my speech to announce that I was gay.

Even though I knew I would have support from my family — something I definitely didn’t take for granted — I was still terrified. I researched a lot about how other people had come out in the past, mostly how they expressed themselves. Then I finally put pen to paper, and even just going through that process felt like I finally allowed myself, after holding in so much for so long, to exhale.

That speech ended up changing my life.

Yes, it was stressful and scary, but I came out on the other side a different person—a happier person.

A few years ago, ESPN even wrote an article about the experience. Even now, I still get emotional when I think about all of the love and support I received from the community. It was difficult to accept at the time, but if I could go back and speak with my younger self, I would tell her how loved she truly is and that she didn’t need to be so afraid.

When I came out, I did it for myself on my terms—as every gay person should have the opportunity to do. But what I never expected was that it would end up having an impact on others.

The same way my mom’s bravery gave me strength, after the ESPN article came out, I began getting a ton of messages on social media from other closeted young lacrosse players who indentified with my story. Without realizing it or really intending to, I became the out professional lacrosse player that wasn’t around when I was younger — and it’s a role I’ve felt really honored to embrace.

It really hit home a little more than a year ago, when I was in Richmond. I was competing at one of the biggest recruiting events in the country for girls lacrosse, and there were a ton of fans in attendance. After the game, we had a line that must have stretched 50 yards of young girls wanting autographs (which, by the way, is AWESOME).

I noticed that there was a mom and a dad who were kind of hovering around me as I was interacting with the people. When I had a little break, I walked up and introduced myself and they told me they had a daughter who recently came out and admired my story. I immediately asked, “Where is she? I want to meet her.” I followed them to the back of the line where their daughter was waiting, and I tapped on her shoulder. As soon as she saw me, she immediately had tears in her eyes and we exchanged this really long hug. To this day we still stay in touch and I’ve even seen her at a few goalie clinics I’m involved with.

I came out because I wanted to be able to truly be myself and feel happy. But for that to also eventually impact and inspire other young people who grew up with my same insecurities is more than I could have ever asked for. In a lot of ways that moment at the camp really embodied what I think Pride Month is all about, which is to say a celebration of love and joy. Not just about being open with your sexuality, but celebrating the sense of community you feel because of it.

And I love all of those things about myself.