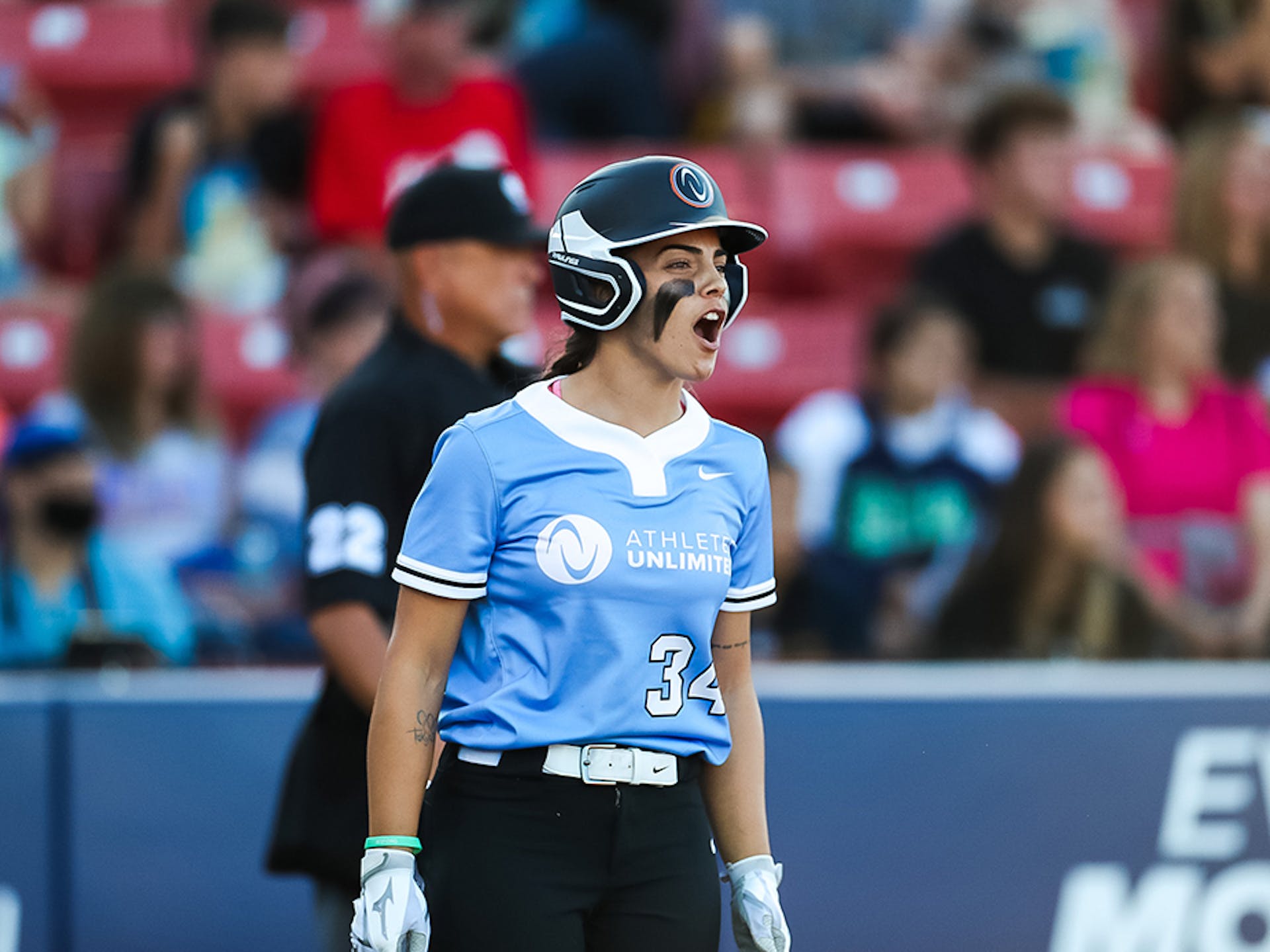 There was a crispness to the early evening air in Rosemont, Illinois on Labor Day, perhaps a hint of autumn.

Crisp and clean also were the watchwords of the day on the softball field at Parkway Bank Sports Complex, where Team Vidales (Blue) scored a 4-1 victory over Team Piper (Purple).

Pitchers Haylie Wagner of Team Vidales and Aleshia Ocasio of Team Piper set the tone, each tossing complete games, with Wagner emerging victorious with a four-hitter that included no walks and five strikeouts.

The Athletes Unlimited scoring system came into play, too. Even though Team Vidales was the home team and had the lead after the top of the seventh, the bottom half had to be played because of rollover points. Neither team had scored since the second, so 50 win points were on the line. Lilli Piper’s team scored a run in the top of the seventh, but a run-scoring single by Erika Piancastelli in the bottom half gave the 50 points to Team Vidales.

Wagner was sharp from the get-go. She retired the first eight batters she faced before Jazmyn Jackson slapped an infield single up the third-base line. Team Piper didn’t get another baserunner until the fifth, on Caleigh Clifton’s double down the line in left. Piper bunted Clifton to third, and Wagner then grazed Amanda Sanchez with a pitch. Wagner then bore down and got Jackson to fly out to left.

Wagner, who earned 60 extra points as MVP 1, worked quickly and pounded the strike zone all evening as she improved to 2-1.

“That was definitely part of it,” she said. “And I think Aubree (catcher Munro) did a great job controlling the game back there and mixing up sequences and speeds as well.”

Team Vidales picked up two runs on three hits in the bottom of the first inning, with the early evening shadows playing a part.

Vidales got things going with a two-out single, and she moved up on a walk to Piancastelli. Hannah Flippen then smoked a line drive toward second baseman Ali Aguilar, who did what she could to field it, but a combination of the sun and how hard the ball was hit caused it to glance off her glove and into right field for a run-scoring single.

A single by Courtney Gano brought home the second run.

Some small ball led to another two-out run in the second. Munro led off with a single and was sacrificed to second by Sis Bates. Munro moved to third on Haylie McCleney’s groundout to the right side. Victoria Hayward then laid down a bunt and beat it out for an RBI single.

After a slow start to the season, Hayward enjoyed a strong Week 2. She doubled in the bottom of the seventh to put runners on second and third to help set up the game-winner.

“Wags threw a heck of a game, and the pitchers are doing their job out here, just keeping me off balance,” she said. “I felt good even though I wasn’t getting the results. Just trying to trust the process. I had one fall into left field, which feels good to be able to do it in a key situation for the squad.”

Until Sunday, Hayward was the only batter in Athletes Unlimited who had batted leadoff for her team in every game, dating to last season. That changed Sunday, when McCleney moved to the top spot, with Hayward batting second.

“I have the same approach, but it is really fun hitting behind Haylie McCleney,” Hayward said. “We just have a really good energy together. It’s definitely comfortable, but I’m always comfortable whether it’s first or second.”

Things didn’t get really dangerous for Wagner until the seventh, when Team Piper strung together a single, double and sacrifice fly before Wagner hit Sanchez with a pitch for the second time. But she struck out Jackson to secure the victory on the scoreboard.

“It was their third or fourth time seeing me,” she said. “You kind of have to change things and really go after it. It gets tough out there. These hitters can hit and make adjustments. It challenges us as pitchers to go after it.”

Team Vidales finished the weekend with a 2-1 record while Team Piper fell to 1-2.

Piancastelli earned 40 points for being MVP 2, and Ocasio picked up 20 for being MVP 3. She worked 6.1 innings, giving up nine hits.

“It’s been awesome,” she said. “This experience has been great. It’s very professional. I’m having a great time. And the people around me are so amazing. I’m just blessed to be here and happy. This league is great.”

Where to Watch: Basketball Week 3