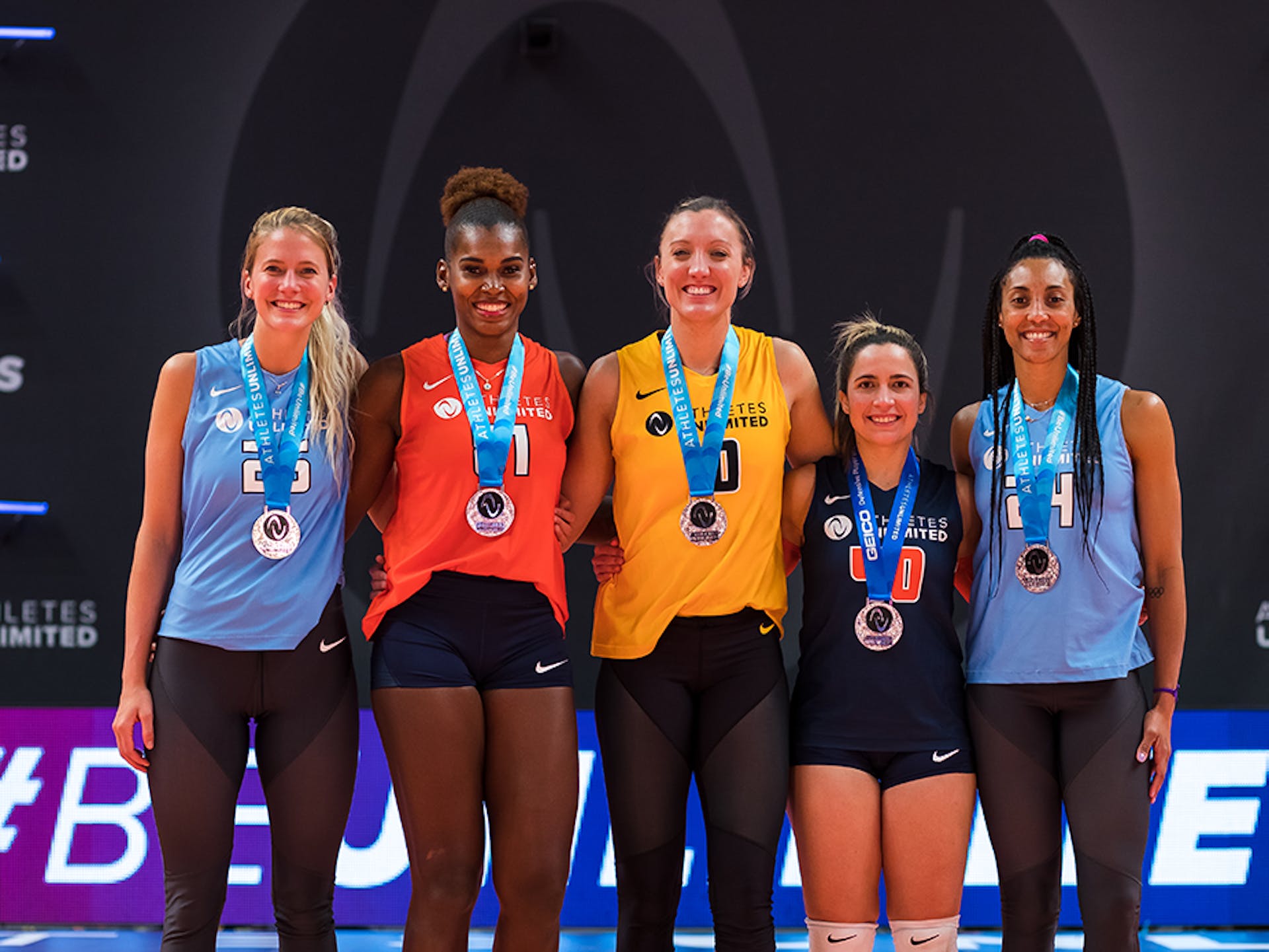 Athletes Unlimited today announced it will host its second volleyball season in Spring 2022 following the completion of its successful inaugural season this year at Fair Park Coliseum in Dallas, Texas.

Athletes Unlimited inaugural volleyball season, in partnership with USA Volleyball featured 45 of the best players in the world including six Olympians from the U.S., Puerto Rico, Brazil, Great Britain and the Dominican Republic. The 2021 season concluded last evening and crowned Jordan Larson as the inaugural Champion and Nomaris Vélez Agosto was named GEICO Defensive Player of the Year by a vote of her peers and fans. Over the course of competition during the five-week season, players recorded over 2,000 kills, 2,500 digs, 350 blocks, and more than 150 aces.

The 30 matches during the 2021 season were broadcast or streamed globally to 100 countries via a network of partners that included CBS Sports Net, FOX Sports, FOX Deportes, ESPN International, CBC Sports, Free Sports and Setanta Sports as well as a robust digital network including Facebook, Twitter, YouTube, Twitch and Dailymotion. In addition, games were rebroadcast on MSG Network, NESN and FOX Regional Sports Networks around the country. In total, 750 hours were broadcast on TV in the U.S. across CBS Sports Net, FOX Sports, 15 games in Spanish on FOX Deportes and the league’s regional partners during the five-week season.

Athletes Unlimited continued to expand the Unlimited Club, its unique fan club. Fans from all 50 states and 29 countries signed up to become members of the Club during the season and were able to interact with players, vote on game MVPs and year-end awards among other benefits.  In addition, 70k new fans joined Athletes Unlimited’s Instagram and Facebook communities while video content on those same channels generated 18,116,323 views during the volleyball league.

Athletes Unlimited Volleyball was honored to assemble an incredible lineup of corporate partners led by GEICO, Mariner Wealth Advisors, Guaranteed Rate, Gatorade, Hyperice and Nike. The league established a network of fan engagement partnerships led by the creation of the first ever women’s volleyball trading card set with TOPPS.The league invested in its athletes off and on the field through its Athletes+ program, a series of activities and workshops designed to provide resources to the players for career and personal development. The program was developed in partnership with Athletes Unlimited Advisory Board Member Abby Wambach and her organization Wolfpack Endeavor.

Civic leadership initiatives included partnerships with The Girl Scouts of the USA and Starlings Volleyball USA in addition to providing financial support for 33 national/local community organizations as part of the “Athletes Causes” program with Give Lively. Athletes Unlimited also joined the WNBA, NWSL, NBA, NFL, MLB and seven other professional sports leagues to support the Ad Council’s “It’s Up to You” campaign which seeks to educate Americans about COVID-19 vaccines.

“I am honored to have become the inaugural Athletes Unlimited Volleyball Champion,” said Jordan Larson. “I am so proud to be a part of this incredible group of athletes that helped launch the only women’s professional indoor volleyball league in the United States. I cannot wait for season two in 2022 as we continue to grow our league and our sport here in America.”

“I am proud to receive the GEICO Defensive Player of the Year award on behalf of all of the people who invested in me and who trusted in my abilities and skills,” said Nomaris Vélez Agosto. “Thank you for sharing this very special moment in my life. It is a true honor to be recognized for my performance by so many of the world’s best athletes and the fans.”

“Having worked with the team at Athletes Unlimited for nearly two years, it was exciting to see the league in action,” said Jamie Davis, President and CEO of USA Volleyball. “Despite unforeseen hurdles including a global pandemic, Athletes Unlimited’s inaugural volleyball season proved to be a roaring success. The exciting new format and empowerment of the athletes was refreshing and USA Volleyball looks forward to working with AU to make season two even better!”

”We are so excited to announce Athletes Unlimited volleyball will return for a second season in 2022. The response from fans, partners and, most importantly, the players has far surpassed our initial expectations” said Jon Patricof, CEO and Co-Founder of Athletes Unlimited. “A special thank you to our talented medical team who kept our players and staff safe as well as USA Volleyball, the City of Dallas, the Dallas Sports Commission, Spectra and Fair Park First for being such tremendous partners in making our inaugural volleyball season happen.”