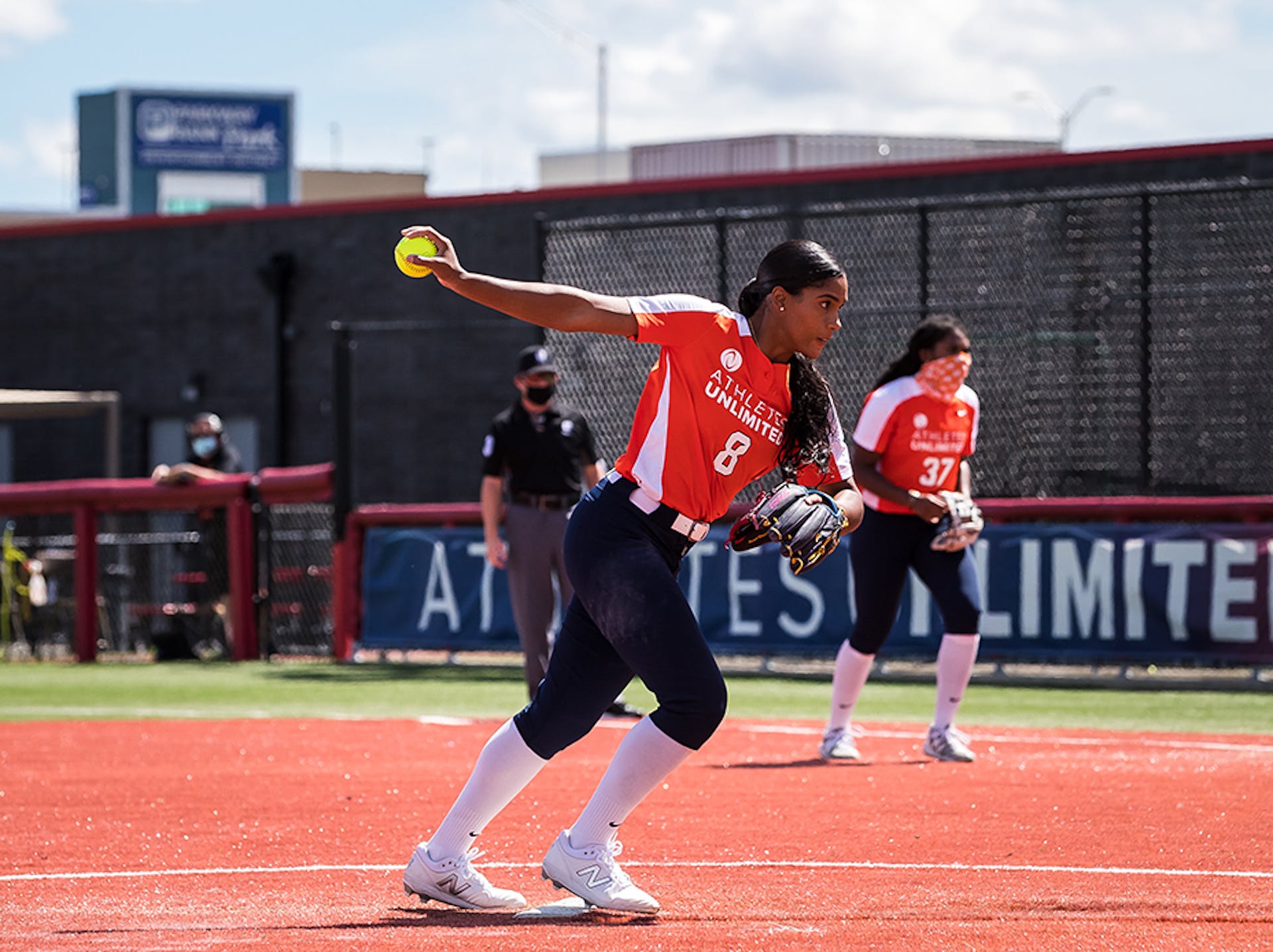 'WE HAVE TO BE SEEN': ALESHIA OCASIO USES PLATFORM TO EMPOWER CHANGE

A young Aleshia Ocasio used to buy UCLA jerseys while in Oklahoma City attending the Women’s College World Series, because that’s where Natasha Watley played in the early 2000s.

Fast forward to a couple weeks ago, when Ocasio and Watley were on the same video call.

It was a thrill for Ocasio to chat with her childhood idol, of course. But the virtual gathering took on a much greater meaning. It was a forum for softball players of color to share their personal stories of being a minority in their sport, and to discuss the widespread social justice movement ignited by the killing of George Floyd and ongoing examples of police brutality and systemic racism in the United States.

“It was awesome,” Ocasio said of the exchange that also included India Chiles, Veronica Nelson and Tairia Flowers, among others. “My bucket was full after having that conversation with them.”

Ocasio, a third-year professional after starring at Florida, has not been shy about speaking out publicly via social media and various interviews. In recent weeks, she has engaged in difficult-yet-necessary conversations with family, friends and teammates. And she’ll soon bring her platform to Athletes Unlimited, as a right-handed pitcher for the league’s inaugural softball season set for August in Chicago.

“Stereotypes, overt racism, implicit biases that people didn’t necessarily know that they had are ingrained in our minds at a very young age,” she said. “Having these open conversations — and they’re going to be tough — with people who might not have to understand these things is super important.

“It can be uncomfortable, but the time is now. More than ever, we have to be able to educate not only our community, but our white counterparts, to change.”

It can be uncomfortable, but the time is now. More than ever, we have to be able to educate not only our community, but our white counterparts, to change.
Aleshia Ocasio,
Athletes Unlimited Pitcher

Ocasio is half Puerto Rican, and said those relatives cannot fully relate to her experiences because “you wouldn’t even be able to tell that I’m part of the family” due to her darker skin color. She has been inspired by her fiancé Natasha Cloud, a WNBA player for the Washington Mystics who has been at the forefront of athlete activism during this time. And Ocasio has raised awareness within the softball community, where microaggressions have been present since she was a kid growing up in St. Cloud, Fla.

Once while swatting a fly away from her face in the batter’s box, for example, an onlooker asked if Ocasio had seen a cop. While in college, she was told she could no longer wear four French braids in her hair because it was against team policy.

“That directly impacts a certain community who historically wears different hairstyles,” Ocasio said. “The culture is there, and doing that you suppress a specific community.”

Ocasio was first approached about joining Athletes Unlimited last year. She was initially skeptical about the unconventional format, where team lineups change every week as part of a more individualized, fantasy-style scoring system.

But because there are no team owners, Ocasio felt empowered by the level of player input. And because players share in the league’s profits, they will see a natural salary bump compared to other professional softball opportunities.

“I want to be a part of the change that they’re promoting within, not only women’s sports, but softball as well,” Ocasio said. “The investment that they’re making for us I think is really important. … I hope that this blows up and is a step in the right direction.”

Meanwhile, Ocasio will continue to call for tangible steps the sport can take to improve representation and inclusion.

More financial assistance for underserved minority communities would allow families of youth players to buy equipment and travel, which are often required to develop and get scouted by college coaches. Ocasio hopes softball can someday form a real partnership with Major League Baseball, similar to the relationship between the NBA and WNBA. And she stressed that television visibility must improve, noting that the Women’s College World Series is broadcast on ESPN but “there’s a lot of people that I talk to that don’t even know that pro softball is a real thing.”

Athletes Unlimited provides another opportunity for Ocasio to use her platform. She hopes she can inspire the next generation of Black softball players, just as Watley inspired her.

“My message is to break barriers and to keep on pushing,” she said, “Because there’s always a place for them, no matter if they want to play softball or they want to do anything else. Fight for what you believe in, and you can do anything that you want to.

“We have to be seen, so they know that we’re out there.”