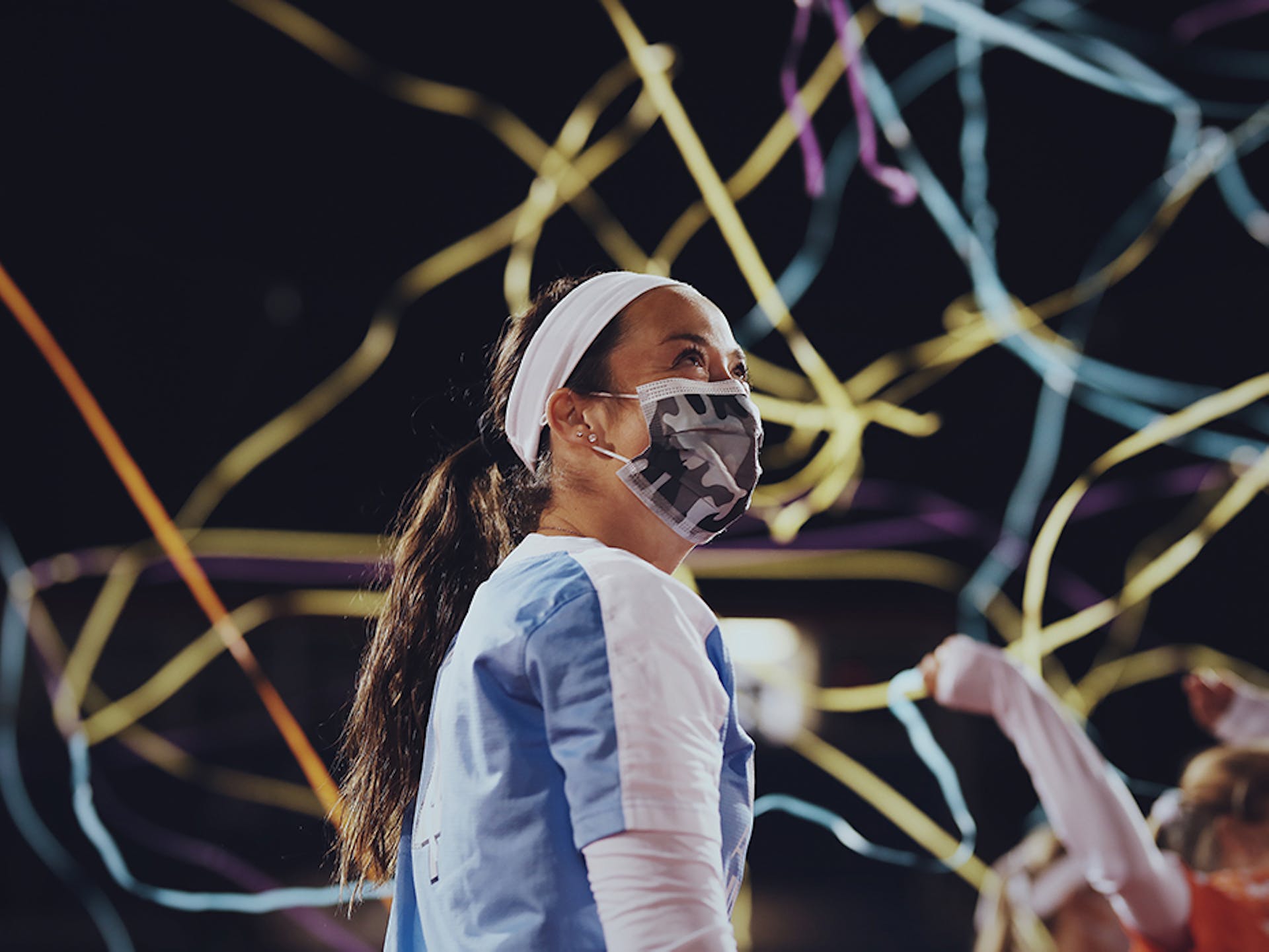 What image comes to mind when you think of professional athletes retiring from sports? For many, it’s opulence. Fast cars, mansions and a life of few unmet wants. At least, that’s what the picture could look like for male athletes. For most female athletes, the future has many more questions, and most of them revolve around wondering how they’ll pay rent or get a job, especially as they’ve devoted much of their adult lives to playing sports with little time to build their work resumes.

“How do you transfer those things you learned because you are an athlete into skills for the interview process?” said pitcher Coley Ries.

It’s a question female athletes are confronted with even while they’re still playing. For many, it’s layered with an additional, existential crisis — how do you even know what your identity is outside of your sport?

That’s what Erika Piancastelli was grappling with inside the Athletes Unlimited bubble this summer in Chicago.

Piancastelli might have grown up in Southern California, but some of her fondest childhood memories take place in Italy, where she was born and where her big, Italian family still lives in her hometown of Modena. When she’s playing nearby it’s not uncommon for a crowd of family to show up at her games. In Italy, Piancastelli played for the same club in the Italia Softball League that her mom had played for when she was a child. But, despite a rich family life, Piancastelli couldn’t help but notice that over the years they were growing apart.

“Family is a big value for me,” she said. “Sometimes I get distracted with softball and I don’t prioritize calling them or updating them on softball because I just let softball take over.” Softball was becoming her main identity, something that can create great instability for athletes as they transition to the next part of their careers.

It was a habit she wasn’t even fully aware she was forming until she attended a WOLFPACK Endeavor session inside the Athletes Unlimited bubble, hosted by Abby Wambach and Shannon Boxx. WOLFPACK Endeavor is a training program for women co-founded by Wambach, two-time Olympic gold medalist and FIFA Women’s World Cup champion, that seeks to help women find the confidence and skills to excel in the corporate world.

The seed of the idea began in 2016 when Wambach was on stage receiving the ESPY Icon Award alongside Kobe Bryant and Peyton Manning. She describes having a pivotal, almost out-of-body experience that galvanized her to action.

“I was hit in the face with the reality of the difference between men and female athletes,” she said. “Kobe and Payton’s concern was where they were going to invest their millions of dollars in retirement. Rightfully so, but mine was how I was going to pay my mortgage.”

She realized then how different their lives would be. In the moment, she made a decision that would shape her retirement.

“I’m going to dedicate my life to make sure this is no longer a reality for women who are retiring who had a career like I had,” Wambach said.

Two years later, she gave a viral speech at Barnard College, which led to her book Wolfpack, and the formation of WOLFPACK Endeavor.

The training program works with organizations to empower their female leaders. Maybe the biggest part of the process, Wambach posits, is dismantling women’s own misconceptions about themselves. Wambach says the most common belief she tries to dispel is that women are told, “Don’t want anything more than you’ve been given, just be grateful.”

“I give some of these women the permission to want to be the CEO of their company, to not feel bad about it, to not feel that this is a departure of feminine values,” she said. “That is the lie you have been told your whole life about what it means to be a woman.”

For female athletes, the issue is somewhat different. “A lot of female athletes have the ambition but they don’t know how to transition that from sport to their real life,” Wambach said.

To help the Athletes Unlimited players develop this skill, she enlisted former teammate Boxx, who has been involved with WOLFPACK Endeavor throughout its development.

Boxx went through her own version of soul-searching after retiring from sports. She found herself eventually narrowing down on what she calls her “super skills” and how they can transfer to the corporate world.

“The main thing is, it’s very important for them to realize that they have more agency than they think,” Boxx said. “Being an elite athlete takes a lot of work and there are so many skills that are hidden.”

Sessions with the Athletes Unlimited players focused on finding these hidden skills, just like Boxx found hers.

“You have to have that confidence,” she said.

For athletes like Ries, learning how to find that confidence was a game changer.

“We are always feeling grateful for the next opportunity we’ve been given, we don’t think we deserve it,” Ries said. “Because of that, our confidence doesn’t continue to build like people who think they went out and got it and deserve it.”

Ries knows all about that. Her softball journey has been anything but typical.

“I played Division 2 softball,” she said. “I made it into pro fastpitch through a tryout.” She spent her whole career feeling grateful, almost like she didn’t truly belong.

“Definitely that first summer, the summer of 2017, I was honestly just, every time I took the field and heard the other team’s lineup, I was starstruck,” she said. “It did take me a while to really feel like I belonged or that I deserved to be there.”

Just as she was adjusting, her team folded during her first offseason.

“I went back to that position of my career possibly being over,” Ries said. “I didn’t have, still, much of a resume to try to get one of the other teams to give me a chance. I think I fell right back into that trap of not knowing if I belonged in the league.”

She signed with the Chicago Bandits, a National Pro Fastpitch team. That led to another round of questioning herself. “When I showed up in Chicago the first day it was like, ‘I need to prove myself and show I belong.’”

Her involvement with Athletes Unlimited led to a third dose of self-doubt.

“This whole Athletes Unlimited thing is the same all over again,” she said. “Because I don’t have the playing resume of being that D1 athlete with a lot of name recognition, I think I always have that lingering in my head. I almost feel like, until I prove myself, other people aren’t going to believe I belong at this level.”

But, the WOLFPACK Endeavor event changed all of that for Ries.

“Yes, I was grateful to be here,” she said, “But, I realized it’s so much more than that. I want the ball, I believe I deserve this opportunity.”

This mindset is something she believes she can carry with her to other areas of her life as she considers what her career will look like beyond playing softball. Ries was recently named head softball coach at Gustavus Adolphus College. Even though she was confident she had the skills for the job, interviewing was the hardest part.

“We’ve been taught to not talk about ourselves so going into the interview process as an athlete, you’re always thinking about incorporating other people into why you’ve been successful,” she said. “This is a time to be OK about being very forward with what you bring to the table and try to say that with confidence.”

She wants to bring that same mindset to the athletes she coaches. “I obviously want everyone to be grateful that they have the opportunity that they have, but I want them to thoroughly believe they deserve it and they earned it.”

For Wambach, this cycle of empowerment is exactly what she believed WOLFPACK Endeavor could do when she started it. “To see it happening in real time, working successfully within the guides of this leadership company, to see women successfully manage, successfully work, inspire other women to be their best and badass selves, it’s a truly rewarding enterprise,” she said.

And while so much of WOLFPACK Endeavor’s focus is on preparing women for leadership positions, becoming aligned with your internal confidence and values can bear fruit in other areas of life, too.

Take Piancastelli. After listening to Wambach and Boxx share their experiences, she realized softball doesn’t have to be the only purpose she lives for.

“You’re stuck between — softball isn’t what defines you, but it’s a big part of your life,” Piancastelli said. “Being able to distinguish those two things was very hard for me after college.”

She realized that, for her, family plays a major role in how she draws meaning from life, something she had been neglecting.

“The cool thing about WOLFPACK is that not only do they teach you about your values but about being an empowered woman,” she said. “Being able to hold your ground and hold your values and stand for what you believe in was huge for me. Listening to Abby speak before everything started. — she knows what she wants, she went after what she wanted and she stood up for what she believed in.”

She decided to use the clarity she was developing to reestablish a stronger connection with her family, calling them often from the Athletes Unlimited bubble to update them on her games.

“They’ve noticed, they get really happy when I call them,” she said. “They even made a comment like, ‘Wow, another call from you.’”

It’s a change that has brought Piancastelli peace, even in the midst of a hectic Athletes Unlimited season. “It definitely brings some sort of tranquility in my life now that I know what I’m doing is what I want to be doing,” she said.

“If one day I wake up and don’t have softball, I know who I am and what I stand for.”