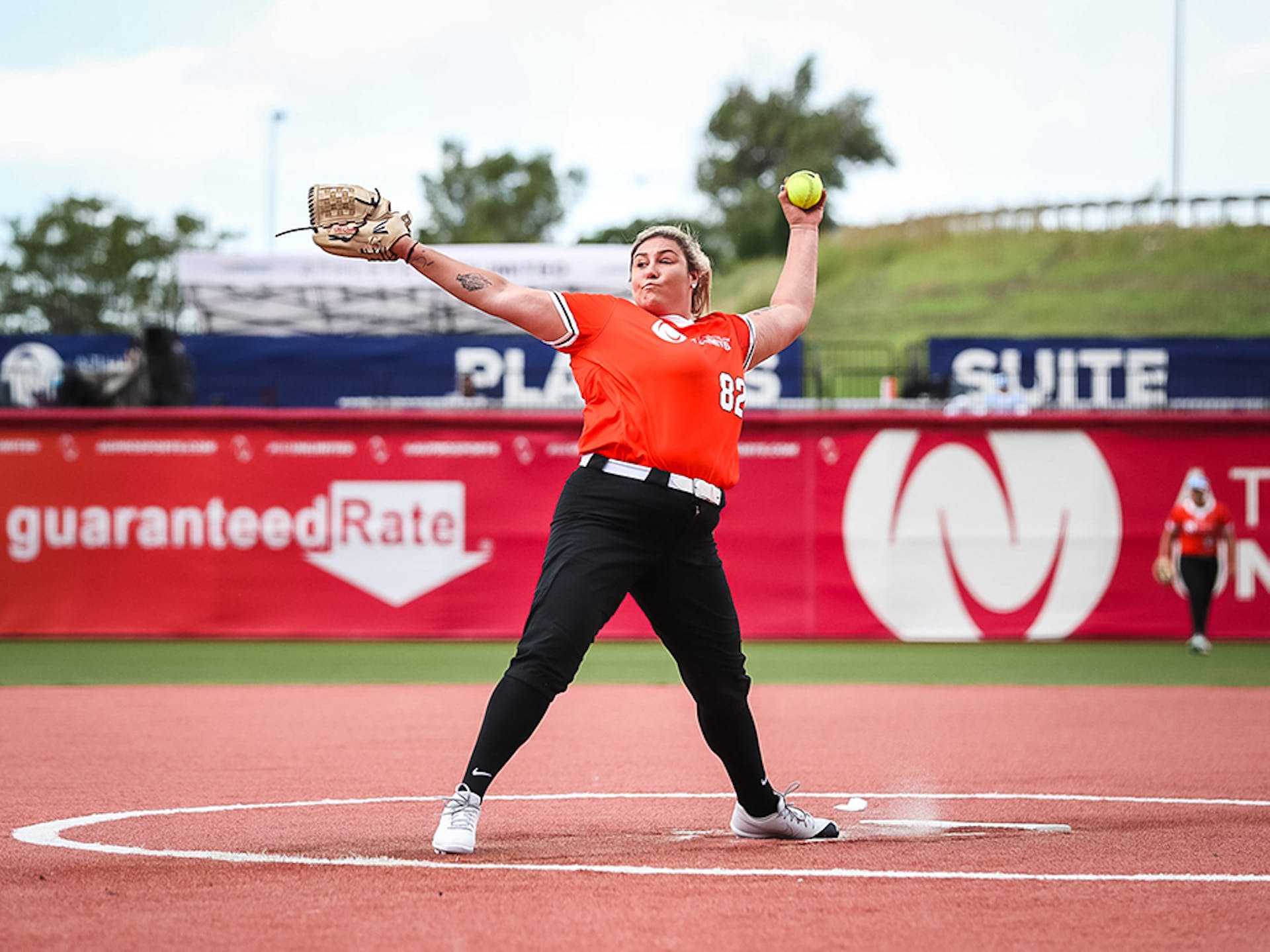 The veteran left-handed pitcher announced she was back at Athletes Unlimited in a big way on Sunday. She tossed a complete-game five-hitter to lead Team Warren (Orange) to a 3-1 victory over Team Piancastelli (Purple).

McQuillin walked two and struck out five. She endured a rough start to the 2020 Athletes Unlimited season before recovering near the end. Her ERA for the season wound up at 8.61.

“I think the Orange team this week has done a great job of keeping me in check, hyping me up, being great defensively and scoring the runs when we need to,” she said. “But this year, my mindset has shifted a little bit to go out there, attack the zone, be myself and just have a different year than last year and show people I’m here to compete.”

McQuillin piled up a whopping 254 points including 60 for being voted MVP 1 of the game by her peers. McQuillin’s battery-mate, Sashel Palacios, earned 40 extra points for MVP 2 honors. Her fourth-inning homer gave her 40 individual points.

But she talked glowingly of her pitcher, both of whom played for Team Mexico in the Olympics. Catching McQuillin was hardly a job Sunday.

“So easy,” she said. “Taylor made my job look so easy. She had a great command of the pitches. She knew what she wanted to throw. Obviously we have the chemistry coming from Team Mexico, but today was something special. I was so honored to be behind the plate watching it.”

Team Warren (1-1) scored a run in the top of the first. Amanda Lorenz led off the game with a single, and she moved to third on Sydney Romero’s double to the gap in right-center. Captain Jessi Warren then drove Lorenz home with a sacrifice fly to right.

Team Piancastelli (0-2) tied the game briefly in  the bottom of the third. Megan Wiggins tripled to right field and came home on Erika Piancastelli’s single to center.

McQuillin shut it down from there, and her mates got her a pair of runs in the fourth. Palacios homered to the bleachers in right field on a first-pitch swing against Taran Alvelo. Amanda Sanchez chased Alvelo from the game with a single. Carrie Eberle replaced Alvelo. Pinch runner Kayla Wedl stole second base and advanced to third on a groundout by Jazmyn Jackson. A single to center by Anissa Urtez brought Wedl home.

“I did it yesterday,” Eberle said of relieving. “I think it’s just getting outs as quick as you can and trying to  get the momentum on your side and putting your team  in a position where they can go compete and try and win an inning.”

So far in the early going, pitching has dominated the hitting in Athletes Unlimited, a far cry from last year when hitters ruled in Rosemont.

“For the pitchers, I was one of them giving up the 6-7-8-9 runs in a game,” McQuillin said of last season. “This year, we just have more depth in pitching. We have stronger staffs al the way around. I think we have more confidence in each other and in ourselves, going out there knowing that we have a team stacked with players who are going to  go out there and compete for us. That’s something that helped me with my mindset, knowing that I have a team behind me and them being able to  go out there and support that team. The team win matters. I want to play for them  every time. I think that’s what all the pitchers are doing very well right now.”