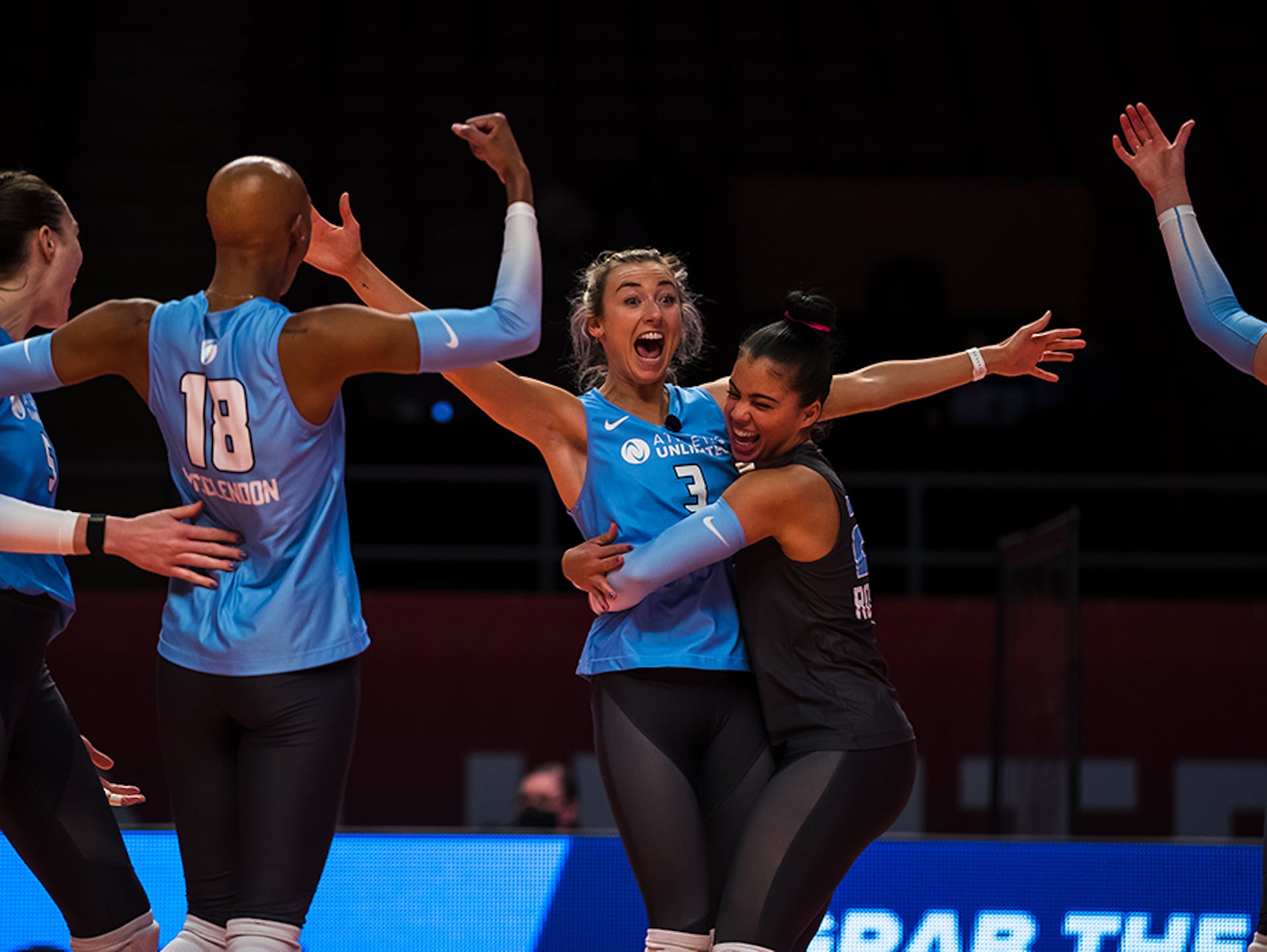 The win gave each member on Team Lowe 140 win points. The win points, along with 104 stat points, gave Lowe 235 in total, allowing her to move past outside hitter De la Cruz by 54 points.

“We used last night as an opportunity for resilience and for how we can play our game and not worry about what’s happening on the other side of the court,” Lowe said. “We were able to take over and put our offense on them instead of always trying to play defense. I think that was a crucial part of our game.”

In the first set, Team Lowe won at 26- 24. The two teams were close early in the set until Team Lowe pulled ahead to 22-16. It seemed as if they were going to easily win the set from there, but a three-point serving run from De la Cruz, in which she got an ace, helped her team to build momentum and close the gap. A kill from outside hitter Deja McClendon ended the streak, but Team De la Cruz managed to side out immediately. Middle blocker Taylor Sandbothe was able to get Team Lowe out of system with her aggressive serve, limiting setter Samantha Seliger-Swenson’s offensive options.

With the game on the line, McClendon secured a kill to tie Team De la Cruz, and followed it up with a block against opposite Ebony Nwanebu. On set point, the teams rallied back and forth several times, but Lowe was the one who ultimately put the ball away and earned the set for her team.

Team Lowe led the set 16-13 when Lowe stepped back to serve. Her team earned five consecutive points, with Lowe’s run ending at 21-14. Team Lowe sided out right away and won the set 25-14 with a strong offensive game.

McClendon led the set in kills, acquiring five, while Symone Abbott and Lowe each had four. Seliger-Swenson and middle blocker Nia Grant connected well, and Grant had three kills on three attempts, giving her a 1.000 attack percentage for the set.

In the third set, the two teams were unable to build more than a three-point lead. Late in the set, back-to-back kills from middle blocker Briana Holman put Team De la Cruz at 24-21. Team De la Cruz won the set 25-22, giving everyone on the team 40 win points.

Abbott was voted MVP 1, earning 60 win points for 312 total points. The outside hitter scored 11 kills on just 21 attempts for a .430 attack percentage. Abbott also had 11 digs and one block.

Seliger-Swenson helped lead her team to victory with a well-run offense, earning 41 assists. She was voted MVP 3 for 20 points, obtaining 284 overall. The setter also had a strong defensive game, getting 11 kills and one block.

“I thought we passed a lot better than last night,” Seliger-Swenson commented. “We were in system and able to run all of our options. It just felt like we were flowing a lot better, easing out the kinks in the offense, and making better setter/hitter connections.”