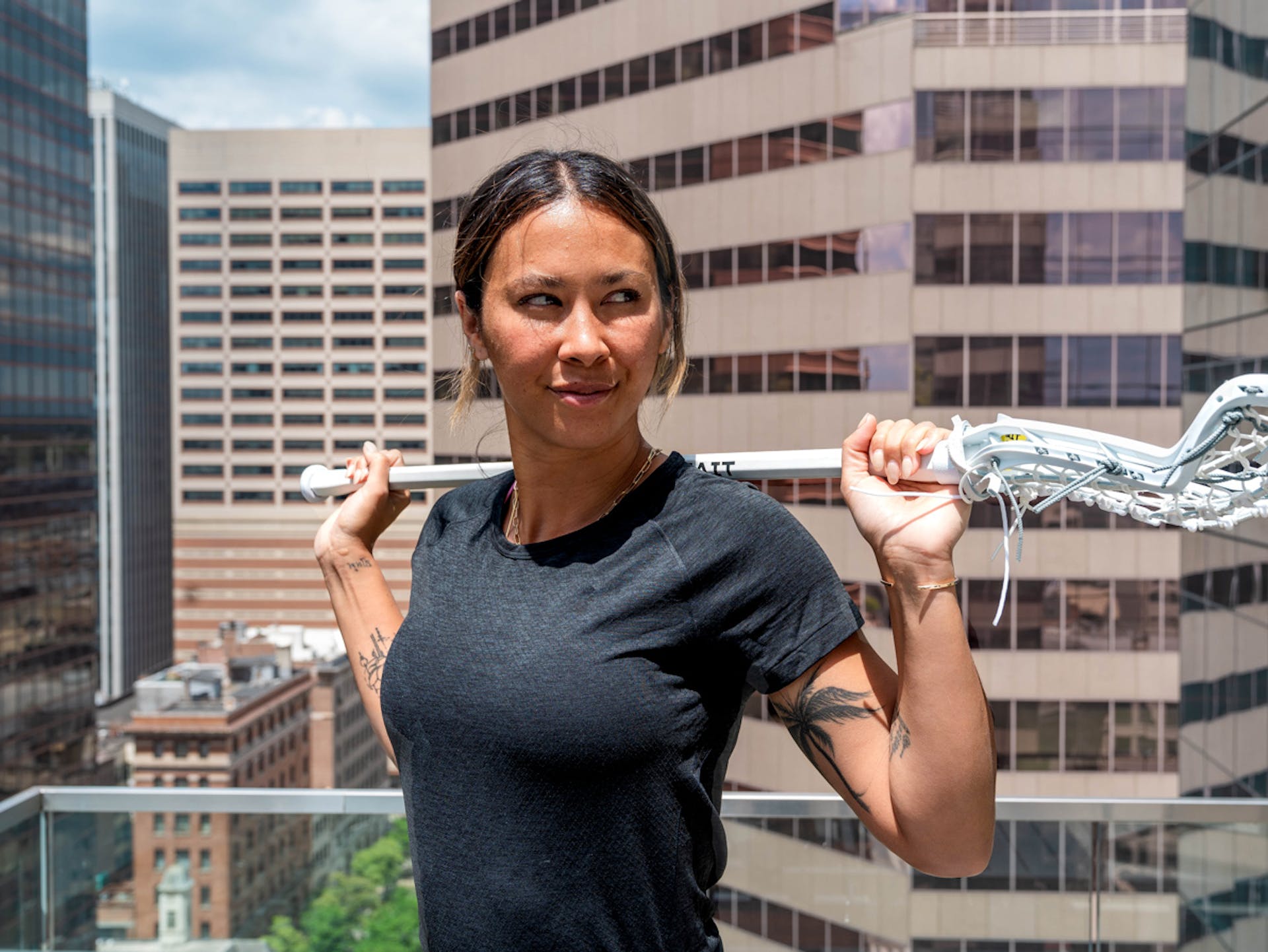 Alex Aust: The lesson I learned from losing

I earned my first degree black belt when I was six year old.

My whole family did karate, that was our thing. When I was little we would spend most weekends travelling around the country to compete at different events. In retrospect, I can’t imagine how insane it might have looked to an outside observer to see me — this tiny six-year-old with fury in her eyes — in a ring sparring another equally intense six year old as our parents cheered on wildly. But for me at that age, it was basically “family time.”

That’s all to say I’ve always been super competitive by nature. Growing up I basically channelled that into just about every sport that I could, whether it was soccer, field hockey, swim team or one short-lived attempt at gymnastics.

The first team sport I really fell in love with was basketball. Honestly, it was more of an obsession. I loved the physicality, the creativity and the constant swings from offense to defense. I played guard and even from a young age, I was intense. I’d be diving for balls, directing plays, just trying to be involved in every single sequence. If you’d asked me back in middle school, I would have told you I was going to the WNBA. No doubt. It was destiny.

I grew up in Maryland, so finding lacrosse was really a matter of “when”, not “if.” For me it happened in 4th grade. I saw some of the older girls at my school playing, and immediately was just mesmerized. They were flying around the field, passing the ball back and forth and rocking these real cool-looking sticks. It clicked pretty much right away for me, like, “Yeah, I want to do this.”

It was easy to fall in love with lacrosse. It was a combination of my favorite aspects of the different sports I’d played growing up. And with time, I became pretty good at it. I didn’t really realize how good until one pretty memorable conversation with my 8th grade basketball coach, Mrs. Culp. She had actually been my fourth grade teacher, so we knew each other well and she’d been tracking my progress as an athlete as closely as anybody.

One day after practice she pulled me aside. I wasn’t sure if I’d done something wrong or if she wanted to talk about the team. But what she actually told me was pretty surprising: “Look Alex, I know that you love basketball and you’re a good player… buuuut… you’re really good at lacrosse. Like, much better at lacrosse.”

It’s funny to think back on, but I could tell she didn’t mean it as a knock. In fact, it was actually pretty helpful to hear that kind of honesty from a mentor I admired. It was this moment when my mindset kind of shifted, and my focus became much more clear. Maybe she was right. Maybe I actually did have a future with lacrosse.

My favorite thing about playing lacrosse has always been being part of a lacrosse team.

Similar to basketball, lacrosse requires a small group acting entirely in sync. And the sport is so fun and so difficult that you naturally build this camaraderie that just can’t be replicated by anything else. It’s a sport that will gladly accept all of the competitive energy you’re willing to put into it — and I really did put absolutely everything into it.

My sophomore year of high school, my club coach told me that some really good programs were starting to express interest in me. Top schools were coming to watch our club team play. It was honestly sort of mindblowing, the idea that these awesome schools weren’t just offering me the chance to play for them, but were competing for me to say yes.

I felt grateful, and frankly kind of overwhelmed, to have these great options…. but my heart has always belonged to Maryland.

It of course started with the coach, Cathy Reese, who I think is bar none the greatest of all time in the sport, men’s or women’s. Her collection of national championship trophies speaks for itself. She operates with a certain confidence that reverberates throughout the program. She made me just feel super proud to play for Maryland.

There was definitely a learning curve adjusting to the college game, but Maryland didn’t really buy into seniority or class designation. Even as a freshman, you were expected to play and help the team win a national championship. That was the standard, regardless of your class or experience level, every single year. And it’s why we were successful.

For most of the season, things seemed to line up perfectly. We were the #1 ranked team in the country. ACC champs. Undefeated.

We made it to the Final Four, where we won a close game against Syracuse to advance to the national championship game. We were full of confidence. And we were really familiar with our opponent, UNC. Given that we’d beaten them during the regular season, we felt as good about the matchup as we possibly could. But when the game finally started, it was clear that they’d really come to play.

Looking back, it’s all almost a blur. That’s just the nature of doing anything connected to so much pressure, adrenaline and speed. You’re basically operating on instinct. But from the jump, it was clear that something was off. We weren’t playing our game.

We fell behind by three goals at the half, but managed to make a run to tie it up late. With a couple of seconds left in regulation time, Taylor Cummings had an eight meter, a position I’ve seen her score from so many times before and since. When I reflect on that play, I wish so badly I could go back in time and just shout for her to stick the ball in the back of the net. Just like, “BURY IT!” She’s one of the best players I’ve ever competed with, but she was a freshman in a tight situation. I was a senior leader who could have given her that extra push of confidence at the right moment. But instead, I think I was just holding my breath, like every other person at the stadium.

She ended up passing the ball, and we turned it over. The game went into overtime tied 12-12.

The first overtime came and went without anybody scoring. The longer the game strung out, the greater the tension and pressure we all felt. We were all drained physically and emotionally. UNC was playing like they wanted to win a national championship, and we were playing like we were really scared of losing one.

The second overtime was just as tightly contested, but we lacked that same spark that had led us to that point. Even worse, I think we all sensed it.

About 30 seconds into the third overtime, UNC scored to win the game. It was all over, just like that.

There’s a sort of double-edged sword that comes with playing for a national championship. If you win, it’s a feeling that’s basically unmatched. It’s the greatest possible form of affirmation and you get to celebrate it with your best friends. What beats that?

But the thing is — and I definitely learned this the hard way — the reason winning a championship feels so amazing is because it hurts so deeply to lose one. Especially in triple overtime.

A lot of people to this day still call it one of the best games they’ve ever watched. That didn’t feel like much consolation as the loser, at least not at the time.

After that game, I sunk into a full blown depression for months. Playing for Maryland was the greatest four years of my life. For it to end that way and just be done felt like having a huge part of my identity stripped away. I started to isolate myself, I stopped working out, and, for the first time in my life, I didn’t want to even look at a lacrosse stick.

I’d put so much value in ending my career as a national champion that not doing so made me feel like a complete failure. I was really mean to myself. Why had I worked so hard? Why had I put so much into this? Lacrosse, this thing I loved so much, was now only associated with disappointment and regret.

I stayed away from the sport for a few months until I was called up to try out for the US national team. I showed up for the tryout, but that was about all I did. I was out of shape, still reeling from the loss, and for all three weekends of the camp I just wasn’t the same player. Actually, I hated the player I was. I’d worked my whole life to get to a level so I’d have the chance to represent my country, and instead of seizing the moment I just let myself have a pity party.

That wasn’t who I was. It wasn’t how I’d been coached to play the game. And the experience flipped a switch in my mind.

My whole life, I’d been accustomed to associating success with outcomes. And that can work for a while, if you’re lucky enough to have the right outcomes. Ultimately though, it’s a flawed outlook. In lacrosse and in life, you can literally do everything right and give it your all and you still might lose. But if you invest in the journey itself, the lessons you learn from it and the people you meet, then you can’t really lose.

Like I said, winning is affirmation. Affirmation is amazing, but you don’t necessarily learn much from it. It’s the difficult times, the things that don’t go your way, that ultimately result in growth. Eventually I decided that I couldn’t approach my life like I had that national championship game, with a total fear of failure. Instead, I tried to make a point to be more grateful for opportunities rather than be driven to anxiety over whether they’ll work out.

When I stopped looking back on the loss, and started looking forward to what would come next, good things started happening for me. I rededicated myself to the sport and ended up making the roster at the next USA tryouts. I also returned to Maryland the following season as a director of ops, and was there when my younger sister won two straight national championships — including one against UNC.

I’m not going to lie, of course losing that game still hurts. I text about it with my old teammates to this day. It will always hurt. But I also recognize that it pushed me mentally and emotionally in a way that made me a better lacrosse player and person. If you’re brave enough to put yourself out there, to compete, to leave everything you have on the field, regardless of the result, then you’re brave enough to accomplish a lot of great things. And getting the opportunity to gain that perspective makes me almost grateful we lost that game.