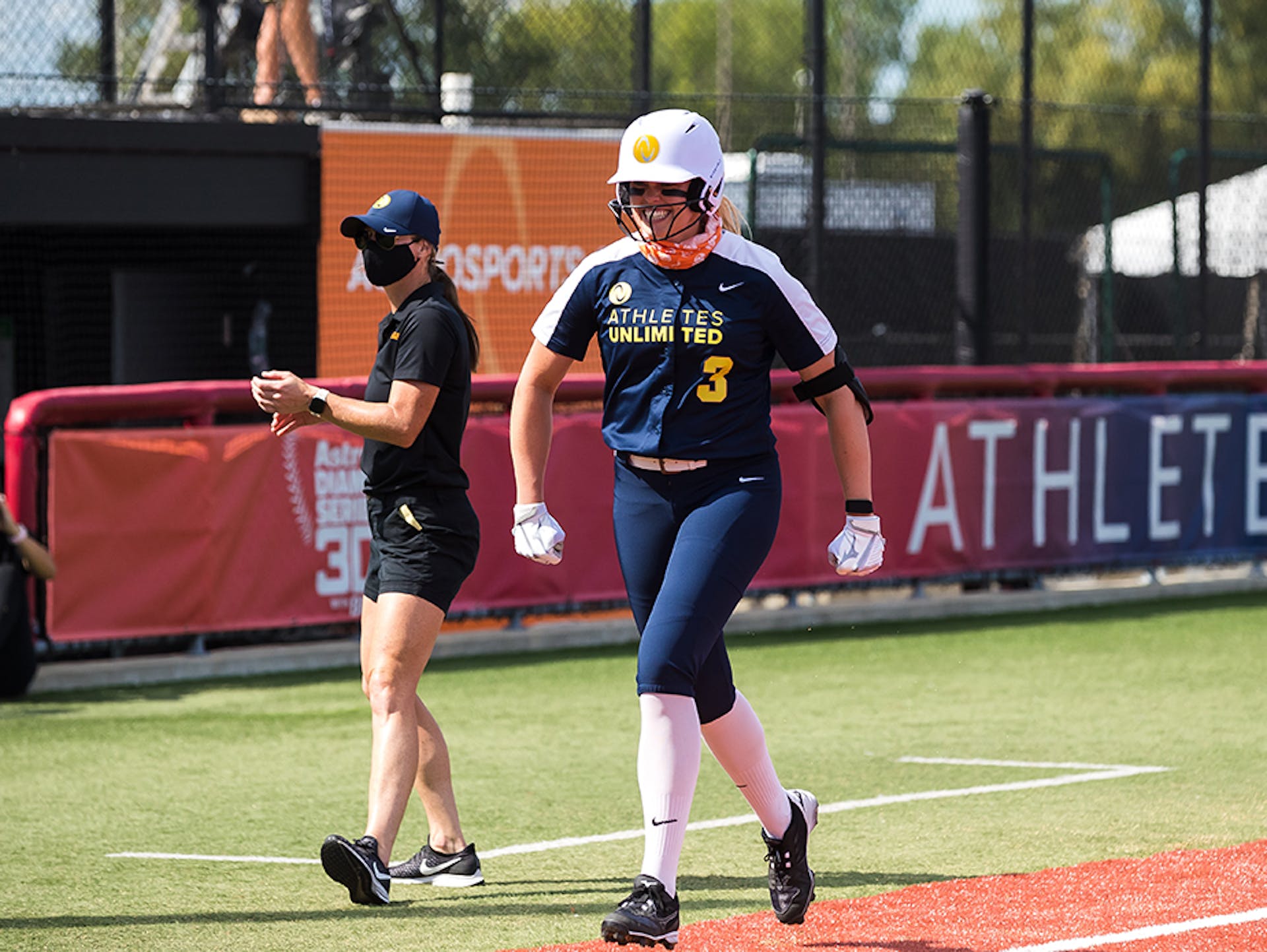 All hail the captain.

With Sunday’s second game hanging in the balance early, Team Gold captain Haylie Wagner took over in relief of starting pitcher Samantha Show in the bottom of the third inning right after Sami Fagan’s Team Purple had tied the score at 2-2. Wagner stranded a pair to end the threat and wound up working 4.1 scoreless innings of relief as her team scored four in the sixth inning to post a 6-2 victory at Parkway Bank Sports Complex.

“It’s super important, not just because she’s our captain, but for any pitcher that would be in that position,” Show said. “It’s nice to know that our staff on this whole team can come in at any time and do what they need to do and trust our lineup to go out and produce when they’re getting it done on the field that we’re going to go out and score some runs for them.”

Wagner, who started and won Saturday’s game for her team, is 2-0 heading into Monday’s two Athletes Unlimited games.

It was a familiar cast of characters doing the damage for Team Wagner. Show homered in the first inning against Danielle O’Toole and added a single in the sixth, when nine batters went to the plate. She also walked in the seventh.

Show was voted the game’s MVP 1 to gain an additional 60 points and now holds a commanding lead in the overall points standings with 494. Teammate Jazmyn Jackson is second with 370 after she went 2-for-3 Sunday including a two-run double in the decisive sixth inning.

Wagner was named MVP 2, and Taylor Edwards of Team Fagan took home MVP 3 after leading her team with two hits.

Megan Wiggins gave Team Wagner a 2-1 lead with an RBI single in the top of the third before Team Fagan gamely fought back to tie it in the bottom half on run-scoring singles by Edwards and Tori Vidales. It was after Vidales’ single that Wagner came in and got Kylan Becker on a pop out.

Wagner was dominant from there, and an offense that has proven to be relentless over two days got it done in the sixth with five hits.

For Wagner, her relief pitching was all in a day’s work.

“I’ll always have my pitcher’s back no matter who it is,” she said. “So I just really went out there and wanted to get everybody out of a tough situation and get us back in there and score some more runs.”

The top four finishers after Monday’s competition will be captains responsible for drafting new teams for next weekend’s play. It seems Wagner has done quite the nice job of captaining her ship.

“I’m going to go for the best players,” she said of drafting. “A lot of them are on this team right here. I think people are getting the gist of how to draft. You can’t just go for your friends. You’ve got to go for the best on the board. I’m just grateful we’re able to help, not just the other two (Show and Jackson) here, but the team. We should be getting drafted rather high now because we’re going out and producing, not just the starting nine, people off the bench – baserunners. Everybody’s doing what they they need to do. I think that’s super cool to uplift each other to get drafted higher.”