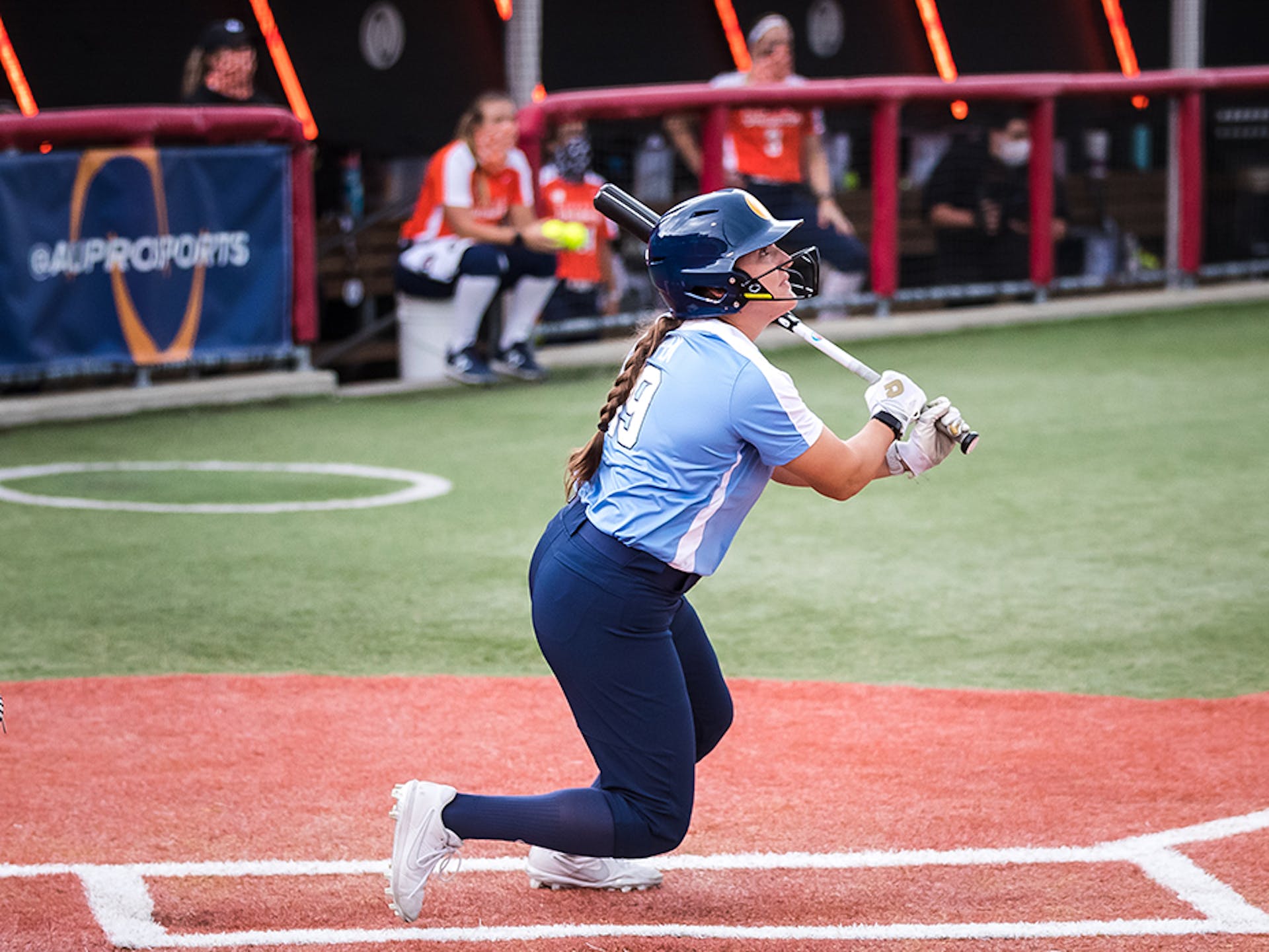 Team Hayward put up a tidy pair of bookends to their 13-5 victory Sunday over Team Show on a day when all of Athletes Unlimited’s scoring machinations were in full force.

Hayward’s Blue team scored five runs in the first inning and six in the seventh, sending 11 batters in each inning.

The victory was the first of the weekend for Team Hayward while Team Show fell to 0-2.

“Bookending was important,” said Hannah Flippen, who went 3-for-5 with a home run, three RBI and a walk to take home MVP 1 honors and 60 extra points to go along with her 70 stat points and 80 win points. “Being the visiting team is really hard. To get ahead early in the game is really important and then putting the knife in the back and twisting it, finishing it off and not let off the gas pedal and just getting after it in the seventh inning.”

As you might expect from the score, many players had good offensive days for Team Hayward, which piled up 16 hits to 11 for Team Show. Captain Victoria Hayward was the second MVP, earning 190 total points, and Morgan Howe was MVP 3 with a pair of doubles, a single and four RBI.

Howe continued her slugging prowess. On Saturday, she homered over the 36-foot-high scoreboard in right-center field.

Asked if she got the ball back, she smiled and pointed to teammate Flippen.

Teammate Nerissa Myers reached base all five times up. She singled, doubled and walked three times, picking up 20 individual points for the double and 10 each for the other plate appearances.

“Honestly, I just think I’m a super patient hitter,” Myers said. “I know the people in front of me and behind me are going to do their jobs so that helps me to be able to see a little more pitches. I’m also super comfortable with a two-strike approach. So I’m like, ‘Just trust it, look for your pitch, not so much what they’re throwing. Sit on what you want, and it will come to you.’

After the first inning, Team Show kept chipping away with single runs in the second, third and fourth innings and two more in the fifth, allowing them to creep within 7-5 after five innings.

In other words, there are numerous ways to score points and help your team.

“It’s really cool; it’s different,” Myers said. “It makes you think about the little things that you’ve always had to do every day. Then you actually get to see how it pans out in a game with the points system. So I think that’s really cool.”

For Team Show, Taylor Edwards had a big day with a double, a homer and a walk, picking up 70 individual points in addition to the 40 innings points won by her team.
Danielle O’Toole earned the win with five innings of seven-hit, two-run ball. Show took the loss, giving up 10 hits and 11 runs (9 earned) in 1.2 innings.