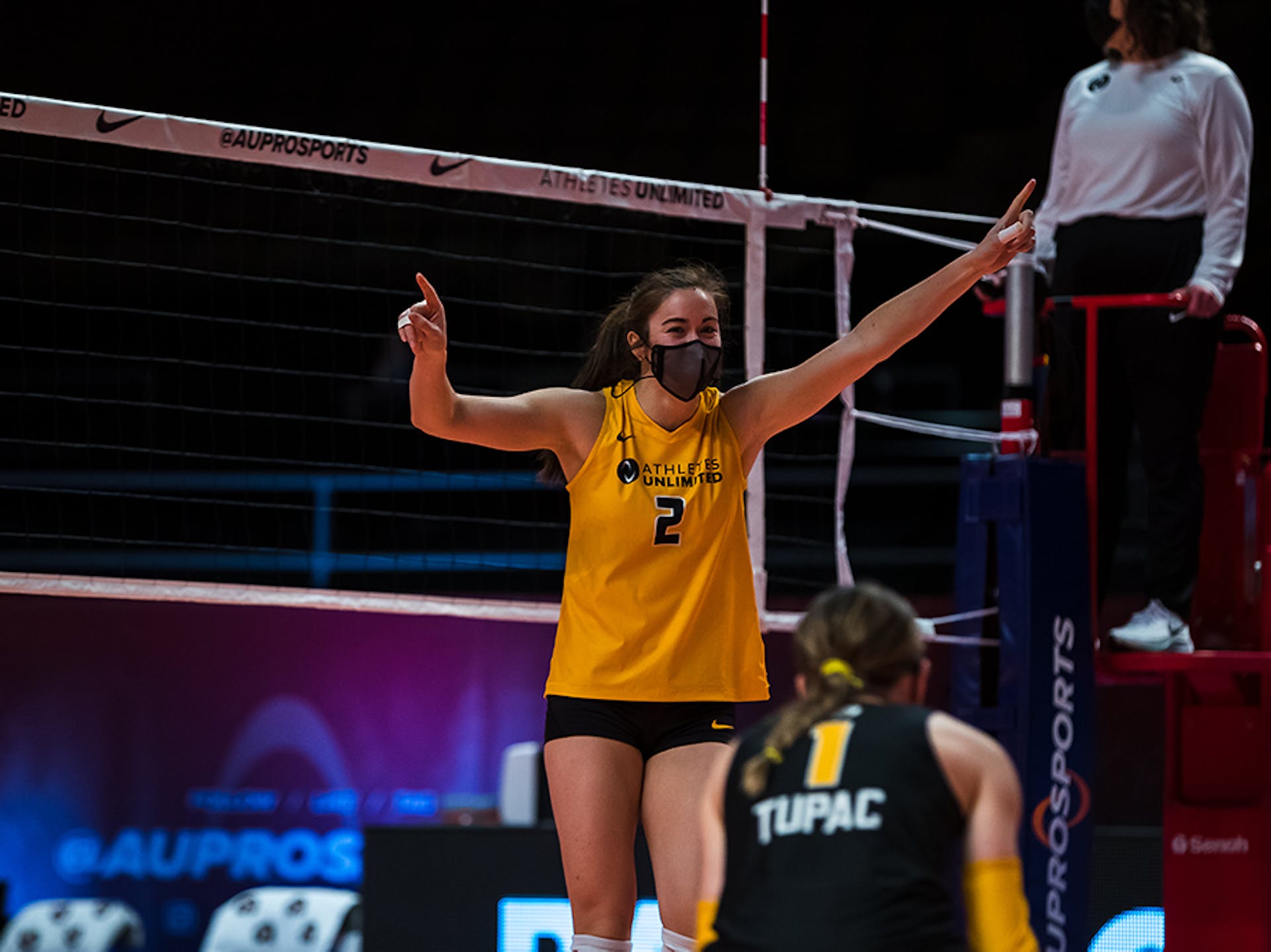 In their second match of the weekend, Team De la Cruz (Gold) defeated Team Hunter (Purple), winning all three sets and the match, 75-62. For their victory, everyone on Team De la Cruz earned 180 win points.

A huge factor in tonight’s win for Team De la Cruz was the return of setter Val Nichol. Tonight was the first match Nichol started in since injuring her ankle during a match in Week 1, and this was the first week she was available during the draft.

“The hardest part was getting the swelling out of my ankle, so once that was pretty much contained, I was able to really get after it,” Nichol stated. “I was practicing as soon as I was in a walking boot. As soon as I lost the crutches, I was pretty much getting prepared to be back on the court, so that really paid off I think.”

Team De la Cruz also put up a strong defensive front, getting 18 digs. The high level of defense made it difficult for Team Hunter to find the floor on offense, and no one had a positive hitting percentage except for opposite Sherridan Atkinson, who hit .214.

Team Hunter was much closer in the second set, losing 25-22. The opponents battled back and forth throughout the game with seven lead changes and were tied at 21-21. Team De la Cruz quickly sided out with a Lianna Sybeldon kill, and De la Cruz rotated back to serve. Her hard top-spin serve forced outside hitter Leah Edmond to overpass the ball, and Sybeldon put it away with another kill. On the next play, a kill from Sheilla put Team De la Cruz at set point. De la Cruz’s serve caused another overpass and Lichtman capitalized on the opportunity, getting a kill to end the set.

Set point and @bdelacruz18 is at the service line?

You know you’re in good hands 😎

The captain forces the overpass and @CassidyLichtman dinks it over to give Team Gold the 25-21 second set win! #BeUnlimited pic.twitter.com/pPB5FncWa7

In the final set, the two teams were close the entire game, and Team De la Cruz never had a lead until the end, when a crucial challenge occurred as the two teams were tied at 22-22. De la Cruz attacked a ball from the back row that landed out, but De la Cruz challenged for a “block touch.” The original call was overturned and went in De la Cruz’s favor, giving them their first lead of the set at 23-22.

Team Hunter earned the next point with a kill from Atkinson on the right side, but Team De la Cruz responded with another kill from Sheilla to put them at set point. A tough serve from Sybeldon got Team Hunter out of system and caused an Atkinson hitting error, with Team De la Cruz winning the set 25-23 and the match 75-62.

Throughout the match, Sheilla played a pivotal role in earning her team points, finishing out the night with 16 kills and only one error on 38 attempts for a .390 attack percentage. Sheilla also had two blocks and six digs. She was voted MVP 1, earning her 60 points to put her at 406 overall.

Lichtman hit .450 in the match, obtaining 11 kills on 22 attempts. Team Hunter seemed unable to adjust their defense to find a way to stop her.

“I was super excited that Val was back playing. We played together that first weekend and I thought we had a good connection,” Lichtman said. “I think she gave me the ball in a place where I had space to move it around a bit, which is when I’m at my best. I think when I have space to be creative and make it weird for the other team, that’s when I excel.”

For her outstanding performance, Nichol was voted MVP 3, granting her an additional 20 points to put her at 292 overall. The setter had 36 assists, 12 digs, and two kills.